Using your iPad as a second monitor 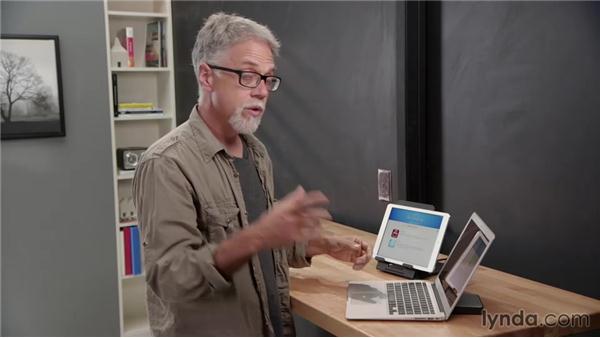 I've spent a lot of time piecing together a field photography workflow situation that I like. And what I mean is, I spend a lot of time on the road and I want to be able to do post-production on the road, so. Finding the right set of software and hardware that lets me do the post-production that I want when I'm in the field and, that lets me integrate back into the post production system that I have back at home. It's been tricky, but I finally feel like I got it working except, that I really miss that big 23 inch monitor that I had at home. I usually travel with either an 11 or 13 inch laptop.

And I also usually travel with an iPad and just recently, I've learned that there's software that lets me use the iPad as a second monitor on my computer. This is great. It allows me to have more screen real estate, which starts to give me back some of that nice big monitor that I have at home. So, this week on The Practicing Photographer, I want to show you how that works and see why it's a great advantage if you're a photographer. I'm using a program called Air Display, which is made by a company called Avatron. For this to work, you have to install a client application on your Mac and you have to install an application on your iPad.

This offer is also available for Windows machines and android. So it kind of doesn't matter what hardware you are using, you're probably going to be able to get this to work. The way the communication works between the two devices is via Wi-Fi. So you need to be on a Wi-Fi network. Now that doesn't do me much good when I'm camping. Fortunately, Air Display will work with an ad hoc network. An ad hoc network means, I'm creating that Wi-Fi network out of my computer. It's becoming a Wi-Fi hub. It won't have any internet connection, but it will at least, put out a Wi-Fi signal that others devices can connect to.

So, I'm going to do that, just so you can see how that works. I actually have a bunch of Wi-Fi networks that I can connect to here, they all work fine. But most of the time I might, where I'm really doing field work where I might be somewhere where there's no Wi-Fi. On the Mac, I just go up here to the Wi-Fi menu and say, Create Network. It gives me a, a default name and I can choose to put whatever kind of encryption on it I want. I'm just going to say, create. And now that should be out there broadcasting through the universe. So what I need to do is get my iPad connected to that network, I'm going to do that just as I would connect to any other Wi-Fi network.

It doesn't show up here in the choose the network section though, it's down here under devices. So I'm going to click on MacBook Air, it warns me that this network is not connected to the internet, that's fine. I'm going to say join anyway. And now these two devices are connected via Wi-Fi. So the next thing I do is go over here to the Air Display app and launch it. And now, I don't know, if there's a bug or what. But when I'm on a Wi-Fi network, Air Display gives me a warning that I'm not, but I am. So I'm just going to say, OK. It's now waiting for a connection from the computer.

Air Display on the Mac installs this little icon up here on your menu bar. When I open it, it looks for all of the iOS and Android devices that are broadcasting or even window devices. I can use another computer as a second monitor. This is my iPad, I am just going to say, Connect. And here we go, I have a second monitor here now on my computer, just to prove that to you. I going to open a window here, and you can see I can drag it off, right over here onto this monitor. It really does work, just like a normal second monitor would. I can even go up here to System Preferences.

Go to Displays, and I get all the normal interface including Arrangement. I can tell it where the second monitor is. I can move the menu bar around. I can even change the resolution settings, just like I would with a normal monitor. Where it becomes cool for a photographer is in an application like Lightroom or Aperture that has built-in support for multiple monitors. I'm going to switch over to Lightroom now. And, by default, I get just a normal Lightroom display here.

It's, it's working just in single monitor mode. But if I go up here to the Window menu and go to Secondary Display, I can tell it what I want my second monitor to be. So, I'm gong to set this here, on Full Screen. So now, I've got my thumbnails over here, and I've got a nice full screen display over here. This saves me a lot of time from having to go back and forth between, switching to full screen, I can keep an eye on my contact sheet and see a nice preview. This is great for when I'm copying edits from, from one image to another, I can stay in grid mode, which is the interface I need to be copying and pasting edits, but I can also be keeping an eye on the full screen over here.

There are lots of other things I can do with my secondary display, I got lots of options here for seeing compare mode over here, slide show mode over here. A 100% loop view over here. So, that's just one thing I can do with my dual display. If I'm running photo shop, I don't have a built-in dual display feature like that, but there are a lot of things still that I can do with a secondary monitor. I can take the palettes that I use regularly and move them over here, that's a little small maybe. I can set up my iPhone as another display and, and just keep palettes on that, which would be ridiculous, but it looks really cool.

The nice thing about Air Display is that it can drive up to four different iOS or Android devices at once. Or, maybe I don't even want to split a Photoshop across screens, I just want more screen real estate for the different things that I'm doing. Maybe I'm working in Photoshop with the idea of throwing images into a page layout program, I can have InDesign running over here. Maybe I've got something running over here that's not even photo related. I keep my mail program over here or, cat videos running, something like that. So, I've just back to the functionality that I'm used to having at home. I've got a nice big amount of screen real estate to work with, and I'm doing it with the hardware that I carry with me all the time anyway.

So Air Display, it's $9.99 for the iOS version and I feel like it pays for itself with just a single road trip.

Video: Using your iPad as a second monitor