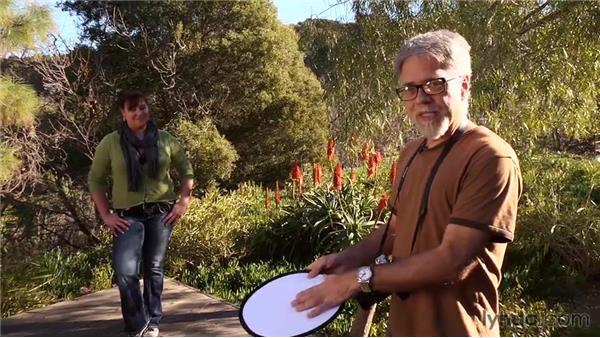 Join Ben Long for an in-depth discussion in this video Using a small reflector to add fill light, part of The Practicing Photographer.

In this week's exciting episode of the practicing photographer, Heather and I have wandered into shade. It's a really harrowing photographic experience here. I wanted to take a picture of Heather, but just, we're standing in shade. So, let me show you why I'm seeing this as a harrowing situation, okay, it's not really a harrowing situation. But it isn't going to make for the best photo, especially because there's all this bright stuff behind her. So this is what I get when I just shoot normally. background's all lit up, her face is all in shadow. You might think, well, yeah, you're supposed to pop up your flash. Oh, okay, right.

So I'm going to pop up my flash, and hit her with some flash there. That's better, It hit the tree back there, which actually surprises me. I wouldn't think a flash this small would have that kind of range but I feel like there's a little illumination on the tree. It's also a really flat light because it's right in front of her, it just flattens all of her features out. I would like something that looks so, well, better, and I happen to have something with me. I have this very small reflector. This is a 12 inch reflector. You can get these off of Amazon for under 10 bucks. It folds down really small, and it makes this great sound when you open it up.

And it looks really cool. It's got a golden silver mix on one side. It's got white on the other. Now you don't have to have such a fancy reflector as this, to do what I'm about to do. You can use a piece of foam core. You can use a piece of white paper. The gold silver gives a lot more bounce than the white side does. You could find a gold or silver piece of poster board. You could stick some tin foil to a piece of foam core or paper. It's very easy to make one of your own. Even just eight and a half by 11 is going to allow you to do an awful lot. And I'll show you what I mean.

The Sun's up that way, to my right. And, I'm just going to do kind of a billiard shot here. I'm looking for a spot where I can reflect a bunch of light, directly into her eyes. So, there's before, there's after. Before, after. Sometimes you gotta move it around and search for it. You can also just wait till she flinches and squinches, and kind of tenses up, then you know you've found it. If you actually set her on fire, you've gone too close with the reflector. So, I'm going to hold that right there and just grab another shot.

It's actually changing kind of quickly just as the Sun moves. It's a really nice, natural looking light. If you know to look for it, you'll spot it. The gold is really great for flesh tones. It just warms her up, which is good, because she's in the shade. My auto white balance is not doing the greatest thing for her flesh tones. That's what every model wants to hear, isn't it Heather? Oh don't worry, the color on your flesh tones is going to really be bad. And the Sun is really changing quickly. So anyway, all I'm doing, notice I'm kind of having difficulty finding the spot. That's normal, don't worry about it.

If you can't find it, it doesn't mean you're not doing exactly what a real lighting person would do. Sometimes it just takes a while. You can get more light by getting closer. the white from this distance is not going to do much good. What's amazing about this thing, actually though, is how much distance I can get with it. Let's say the shade actually came up to here, and I was standing in the shade with her. If I had a friend with me, I could put them over here, where there is some sunlight. Now this is a good, I don't know, ten or 15 feet away. It's actually well beyond the range of my flash and yet still I can throw enough light on her to get a good shot.

There's before, there's after, before, after. Look what it's doing it's putting some nice color and a little bit of reflection in her cheeks. It's putting a catch light in her eyes. It's lighting up her whole face. And that's just with a little 12 inch disk. So this is a, and the range would go even farther, so this is a great solution for someone standing in shade. But it's also really helpful for someone who is standing in direct sunlight. Heather, could you please move up here into some direct sunlight? And let's turn this way so that we are getting, here the problem is too much.

Contrast between one side of her face and the other. So, when I shoot, I've got one side of her face all lit up, and the other in shadow. Let's try the flash again. This is a case where the flash might actually work out just fine. But no reason not to try it. My batteries are a little low, the flash is taking a while to charge. So we get that. That's not bad, but I can still use my reflector in this situation. I'm going to actually try the white side this time, and look at the difference there. Just the difference between no white and white. The whole shadow under her cheek is just going away and that gives me.

See if I can see it in the view finder. Now sometimes if you can't see it in the view finder, you can use your, your off eye. The one that's not looking through the view finder. See what happens if we go to gold. Hopefully I'm not going to set her on fire, or blind her too badly. She doesn't have to do anymore work for today. So there's a tree growing out of your head Heather I haven't been paying attention to that. And there's a good lesson there, don't get so fixated on worrying about your highlights that you forget to do the rest of your job as a photographer. And pay attention to the rest of your composition. This is one of the best under $10 you'll ever spend.

It can really, really, really make a difference when you're shooting in shade or uneven lighting. Again, you can make your own. And this is not just some dumb little hack that we're doing. This is actually the exact same thing that's happening on all of our shoots when someone like Greg, our lighting guy pulls out a really big version of this and throws light all over the place. reflectors are a really handy everyday lighting tool. One last tip, when it comes time to put it away, you put one hand like this, you put the other hand like this. So I've got this thumb on the back, this thumb on the front.

And then I just twist my hands. And it folds right up. A lot of people have trouble with that. The other problem is you got to be careful when you let it go because it just, it does that. So give it a try. It's inexpensive. Maybe before you buy one, just invest in a piece of paper. That's not so bad. Get some uneven light and just try bouncing it around.