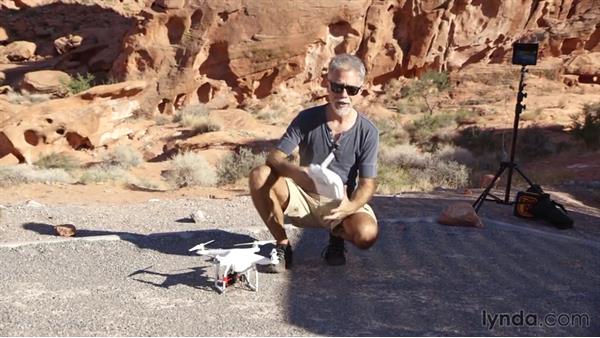 Join Ben Long for an in-depth discussion in this video Using a monitor to get a first person view of the aerial camera, part of The Practicing Photographer.

- On last week's "Practicing Photographer", you saw me flying a drone around, taking some pictures. This week, I wanna talk about the gear that I'm using to do those aerial shots, and give you some tips and suggestions on how to build a cool, drone-based photography rig. I've got here a Phantom 2, which is a really popular drone. I like it because it's incredibly easy to fly. It has a built-in gimbal, which means the camera stays level all of the time, regardless of how windy it is, or how lousy a job I'm doing piloting the thing.

And it works with a GoPro. Now, DJI, the company that makes the Phantom also makes something called the Phantom Vision, which has a built-in gimbal and built-in camera, and it's a great system, and it's actually a bit easier to use than this one, but I like the quality better out of the GoPro. Also, I already own a GoPro, and I have workflows set up around GoPro. I know how to process the images and that kinda thing. This is, probably, ends up being about the same, maybe a little more expensive than going with the Vision, but I get a lot more flexibility, both for shooting stills and video.

So, I can just, out of the box, take this and a GoPro, slap it together, fly it up in the air and take pictures. The problem is, if I do that, I won't have the foggiest idea of what I'm shooting pictures of, because I won't have a viewfinder or monitor of any kind. I have modified this Phantom to give me something called an FPV system, or First Person View. What that means is, I'm adding a little radio transmitter to it that will transmit back footage from the GoPro to this wireless monitor.

With this whole setup, I can actually see what I'm shooting and that makes all the difference in the world. I tried it for a while without the FPV system, and it's basically fishing. You put it up in the air, you fly it around, you point it at what you think you're pointing at, then you come back and you look at the pictures and hope that you got what you wanted. This is a much better way to go, I can actually kind of meticulously compose shots. The modification is not that difficult because it turns out the Phantom is already set up to have stuff like this added to it. What you have to do to get all this to work is, open the case up and attach some wires that give you these two little connectors here.

This is not all provided with the transmitter that I got. Some of this stuff had to be bought at the hardware store. This is the transmitter. It transmits on 5.8 gigahertz frequency. Now, you may go, "Well, I don't need that, because the GoPro "has its own WiFi thing, "and I can use my iPhone as a viewfinder." And that's true, you can. But there are two problems with that. One, you don't have great range, so you can't fly the copter very far before you lose the viewfinder. But more importantly, the WiFi frequency can interfere with the frequency that the copters controller uses.

And if those get screwed up, you're gonna have what's called a fly-away. And that means that your drone flies away. And that's that. So, it's better to have a transmitter that works on a different frequency, so that's what this is about. Using it's pretty simple, once it's all wired up here, I just plug these things in. And I have it off now because it's the only way that it fits in the case that I carry it around. I just plug these two connectors in, and then the transmitter itself velcros onto the bottom of the Phantom.

There's nothing else that I need to do other than attach this and there it is, it's ready to go. I then put the GoPro on and get it configured. I don't need to do anything to the monitor. I am now ready to fly and I've got a viewfinder. The next step is to put the viewfinder somewhere I can see it, and then fly the drone as normal. I'm almost ready to go here. I have turned the Phantom on. Now, one of the cool things about the Phantom is it has a built-in GPS, so it knows how to keep itself in a particular place.

I want that feature. It's possible to fly without it, and I've tried it before and it's really hard. It's hard to keep it steady. The GPS also means that if it loses contact with the transmitter, it's supposed to come back on its own. I don't want to take off until the GPS is ready, that's indicated by some flashing lights here on the bottom, so I wait for those to turn green. Depending on where you are and clear line-of-sight, it may take more or less time for it to get a GPS lock. It's ready to go, now's the critical part that I usually forget, which is, I need to start the GoPro rolling. I'd already configured it to be shooting the field of view that I want, the pixel count that I want.

It's in time-lapse mode already, I just need to tell it to start, and it's gonna make a little beep sound when I do that. (beep) Okay, so it should be rolling, I still never trust it. There we go, it probably just took a picture of the inside of my nose, or something. Most GoPro sessions start with some very embarrassing shot of your nose, or your knees or something like that. I think I'm ready to go. I've got my monitor over here. This is just a wireless monitor, it's able to receive on the same frequency that that transmitter is sending on, which is different than WiFi frequency.

It gives me a nice color image, and the GoPro automatically sends a little bit of status information. I have a battery read-out from the GoPro. I can see that WiFi is off. It's telling me that it's on a five second time-lapse interval. I'm shooting seven megapixel at medium field of view. One thing that frustrates me is it blanks the screen when it takes a shot, which can be a little disorienting when you're flying. So, I've got it on this stand, which is nice. It's worth if you can spare the weight and the hassle of carrying it, to take a stand with you, otherwise you gotta set it on the ground or prop it on a rock, or something.

Now, the tricky bit here is, I need to keep an eye on the copter while it's in the sky, but I also want to look at this, which is effectively my viewfinder. It's very, very easy to lose track of the Phantom when it's up in the air. Especially if you're up really high, it's so small that you can get lost in the sky. You'll hear it but not know where it is, and we'll just see how that goes. I'm ready to go, I'm gonna take off now. (drone noise) Now, my monitor's starting to get a little grainy here.

There's a blackout that's happening, that's the GoPro time-lapse interval. Pardon me if I keep looking up into the sky, I want to be sure I don't lose my helicopter. Anyway, I'm also getting out of range of the transmitter. When that starts to happen, the signal starts to break up, it flashes. The good news is, it's still probably good enough that you can get, you can get a sense of your framing. You don't need a super crystal clear view here to understand what you're pointed at. It's also an indication that I can't go too much farther and still be able to see what I'm doing.

Now, the monitor here is serving two purposes. It's obviously giving me a viewfinder for my camera. But also, if I lose track of the helicopter, it's the only way that I'm gonna be able to find my way home, is to try and figure out what it is that it's seeing. I'd really rather not get so far afield that the monitor starts working. I'm actually gonna bring it in a little bit, both for the sake of framing, and to get a clearer signal. One cool thing about the Phantom, is you can program into it using the Phantom software, a virtual cylinder, that the helicopter won't leave.

So, if I knew the range of this transmitter, I could actually force the copter to not ever get out of range of it. I haven't done that, which I should probably do. I see a feature here, these cool rocks with some shadows on them that I'm interested in. This is really just like normal photography here. Alright, I'm feeling pretty good about some of the stuff that I got. It takes a lot of practice to get good at using an FPV system, just because you've got so many things going on, so many pieces of gear just to remember to bring, let alone having your attention divided.

But it really is, for want of a better term, the only way to fly.

Video: Using a monitor to get a first person view of the aerial camera