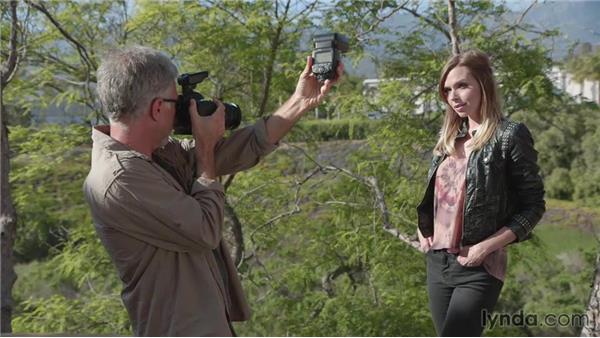 Hi my name is Ben Long and this week on the practicing photographer. We going to do something really, counter intuitive. I'm going to use my flash, to make the background in this scene darker. And I know that sounds completely backwards but here's how it works. Flash all flash have a sync speed, if you watched my foundations of photography flash course you should know this already, that there is certain shutter speed on your camera that you cannot go past. When you're using a flash, and this is because the shutter on your camera is actually two curtains that open and close. At faster shutter speeds there's actually just a little slit of an opening that passes up and down the focal point.

So there's not time where the shutter is completely, open once you pass about a 200th of a second. That means there's no time that you can fire a flash into your scene and have it expose the entire frame. So, on most cameras once you're using your flash, the camera, there's no way you can dial it past a 200th of a second, sometimes it's a 160th of a second. Im using a Canon Speedlight 600EXRT with a wireless transmitter. This flash has the ability to go into a high speed sync mode.

This allows me to shoot with flash, through the entire shutter speed of my camera. I am probably, in this exercise, going to go up into the thousands of a second. If your flash doesn't have that feature, you maybe to add it through a third party wireless transmitter. A lot of pocket wizard transmitters, have the ability to add high speed sync. So, I'm going to start at the very beginning and take you through this whole process. We're going to go through a lot of steps here, and most of the pictures we take are going to have lousy exposure. But you're going to see how this works. I'm want to start by, taking first, just a normal shot, no flash, so you can just see the framing that I'm doing here.

I'm going to frame Christie up here. I want to, I want to blur out my background, as much as possible, I'm not using a super fast lens but I'm opening up at four. And I get this, nice enough shot, but she's competing with the background. I really want to pull the background down, there are a lot of different ways of doing this. I could try to reduce the field to blur it out, I'm already at a four, that's as fast as this lens will go. I can try to crop in tighter so I don't see as much background but, I like the sense of the environment that she's in. I'd like to keep that, but I just want it to be more about her.

Remember, every decision you make as a photographer, is about trying to help your viewer understand, the subject of the image and the background of the image, trying to guide their eye through the frame. So what I would like to do is have the background darker. Well, I know how to do that, I'll under expose, so I'm going to dial in, say. Two stops of under exposure. And now when I take the shot, okay, the background is darker, here's the shot before, and here's the shot under exposed by two stops. Background is darker, that's nice, but she's darker also. I need more light on her, fortunately, I have a flash right here, so, I'm zeroing on some exposure ideas here.

I shot that. Last shot. I don't know what I shot that at. I shot that at 1/4000th of a second, at a four. Way beyond my flash's synch speed. But, well in fact I'll just show that to you. I'm going to go ahead and attach the flash, get it all hooked up here. And now, I'm running out of hands, now frame up my shot. Or at F4, the camera is flashing the shutter speed of 200, meaning it's saying, I am going to shoot this at 200 and your exposure is going to be off.

If I simply activate high speed sync on my flash. That's all going to change. So on this particular flash, I just have to I can do it in either from the flash or through my wireless transmitter here. And now, something else happens. I get, a shutter speed of 1/5000th of a second. I want to fill this side of her face a little bit. I fire the flash and I get this. Okay, that's looking pretty good. I've got a much darker background. She still looks overexposed, so now I just go through the normal process of figuring out a good flash exposure.

I'm going to take my flash exposure compensation down one stop, and, boy one thing about this Canon 242145, when you hold your camera like that for awhile, the lens drifts, so I have to reframe every time it's very annoying. I know, I should find some real problems to complain about, but that's the only one I've got right now. Okay, that's looking better, the flash is getting a little bit more under control. I think I'd like to just see what happens if I take the background down even more. I'm going to go down three stops under exposed.

I'm doing all of this. And now put your priority mode, now what's cool is that I'm staying at F4 so I'm still getting the soft background. I'm combining two techniques to focus attention here, blurring out the background a little bit and I'm darkening the background. Okay that could almost twilight or night I'm getting into really a curious mix of light here. And the flash on her is not, not too overexposed. What if I wanted to go even darker. All right. Right now I am at, a 6400th of a second at F4. I cannot dial in any more, underexposure using exposure compensation, so I'm going to set it back to where it was, and I'm going to switch out of aperture priority mode, and go to manual mode.

I'm going to dial down to F4. I was at a 6400th of a second, so I'm just going to go ahead and drop that to one 8000th of a second, which buys me, like another third of a stop. So I can go down here. Okay, that's good. Notice the flash is getting darker. As I'm underexposing, so I'm just going to turn my flash exposure compensation back up. I'm just balancing all of these, these three parameters, my ambient exposure, my flash exposure, and I'm doing that through changes in flash power, changes in exposure compensation.

I have two other parameters I can play with. I can play with ISO, which is going to make the flash brighter. I can play with flash positioning, I can also play with aperture, aperture will also make the flash brighter. All of this is covered in. In foundations of photography flash. So, let's go up here. That's pretty good. Background's still getting darker. I'm just curious how far I can go. I cannot take my shutter any further. An 8000th is as far as I can go on this camera. But I can start stopping down the lens, so I'll go from F4 to F56, which will be a difference of one stop.

That's probably mostly going to affect the flash. That's probably not going to do much to the background, but we'll see here. It's still is going to be some under exposure. Its good. My flash is getting a little darker when I turn off my flash power some more. Now at this point, I think I've gone, way beyond what I, what I need in terms of background darkening. I think the better shot is more in here. I like this, this is a good balance, of foreground light to background light. It's dimming the background enough that I've got more attention on her, but it still looks like a daytime shot. But, you can see how much power I have.

With this flash, to actually turn the sun down. I have eliminated a tremendous amount of light from this scene. If I needed to shoot a broader area, if I was shooting a, a couple of people or a bigger scene I would need more flashes to illuminate them, but I would still go through this same process, of first determining the ambient background exposure that I want. I figured out that I needed to underexposed by a certain amount. I then had to turn on high speed synch. And then it was just a matter of balancing all of my normal flash parameters. The difference is, with high-speed sync, I`ve got a lot more latitude on my shutter speed.