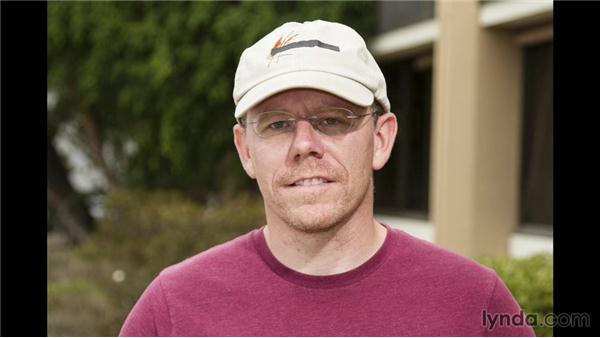 Not every photo you take has to be crafted into a lighting masterpiece. A lot of times you're just documenting your life. You're just taking snapshots. This is one of those times. I'm going to grab a shot of Nick here before I leave. And so we've come outside, and, and I want to take a picture. It's pretty simple. I'm just going to stay in program mode. I'm at ISO 100, because it's daylight. This is a pretty straight forward shot. I'm just going to frame it up here. Let autofocus do its thing, take my shot, and here's what I get. This works fine, but he's got that hat on, and it's casting a shadow over his eyes.

Now you should already know exactly where I'm going with this. Fill flash. My, I have a key light already. It's the sun, and it's doing a good job of lighting up the whole world here and generally sustaining life on the planet. But what I want is that shadow under his hat to go away. Now you might say, so ask him to take the hat off. Well, you know, sometimes a hat is really a part of somebody. Maybe they wear that hat all the time, and you just, you don't want to shoot it without them. That's really part of their identity and you want to capture that, so I'm going to, I'm going to have Nick leave his hat on. And I'm going to go to fill flash, this camera has a popup flash on it.

Now, popup flash as we mentioned before is great for a lot of things, it's really lousy for a lot of things. In general, you can think of popup flash as fill flash. You do not want to use it for a key light, it is a fill light. Because of it's location on the camera, it just doesn't make a good key light. But for a situation like this where all I need is some fill and some shadows, I'm in good shape. So, I'm going to free up the same frame up the same shot here. I'm still in program mode. Now, on my camera, program mode does not allow a shutter speed less than a 60th of a second. So I don't have to worry about handheld shake.

This lens can go, as wide open as F4. I would like to have shallow depth of field because this is a portrait. Program mode is choosing F4.5 actually, I could maybe a little bit wider. Before I do that, I am just going to take a shot, though, and see what I get fill flash wise. So here it is. wow, that's hot. I mean Nick, you look great, but I mean the flash is hot. There is too much flash on it. His face is just a little bit overexposed. You know how to handle this, this is a job for flash exposure compensation. So on this camera, I get to that by pressing this button, and turning my rear wheel, and again, it's the same readout that I use for regular exposure compensation, but in this case it's flash exposure compensation.

When I half-press my shutter button, my readout goes back to here. And you may think we just canceled flash exposure compensation. No, no, this is just regular exposure compensation that's being shown here. When I press this button, it shows that I still have my flash exposure compensation dialed in. So I dialed in minus one stop. How did I know that that's the right amount I don't. I'm just trying that, we'll see if that's enough. It may be too much. He may end up dark. So still getting a 60th of a second at F4.5. That's better, I think it's still a little bright.

I like that it's, it's removing the shadow under his hat. I'm just worried about his stage right cheek there, being a little too bright. So I'm going to come in and just take down a third of a stop more and let autofocus do its thing. Okay, that's looking pretty good. The shadow under his hat is still little bit strong. So I got a choice here. I can turn the flash back up, which gets rid of the shadow, but it's going to give me more highlights. Or I can leave it where it is and complain about the shadow. Now, I can probably pull some of those highlights down in my image editor. I'm shooting raw, I've got a lot of highlight recovery control.

I could probably pull it down and put some more texture back in there. So I'm actually going to dial back up to just one stop under. But I'm also going to ask him to tilt his hat back. Nick I don't want you to lose the hat, but if you could just tilt it back a little bit. Yeah, there we go. That's pulled it off of his eyes, which is really nice. Now I can get that, and this is looking pretty good. It's still a little hot. I need to pull it down a little bit. I would like to have as little depth of field as I can get, though. And this is still metering at 4.5. So if I use program shift, which normally in program mode cycles, through all reciprocal exposure combinations, now it's not doing anything.

But again that's because my flash is up, and so it's requiring the shutter speed to stay locked in at a 60th of a second. So I don't actually have any way of controlling aperture when I'm in program mode. So I'm going to switch over to aperture priority mode, and just dial my aperture down to F4. when I do that, I get a shutter speed of an 80th of a second. Still well under the flash sync speed, so I should be just fine here. And my flash exposure compensation is still dialed in. I perhaps have a little bit less depth of field. I know I've got my apperture as wide open as it will go.

So I like this shot. I think this is going to work. So, again my thought process was to look at the scene and go, oh there are shadows there. I need to take care of them. That's a fill light situation. That means that my popup flash is going to be perfectly suited to the job as long as I'm within range. If I was standing another 10 feet back, we would have a problem. Then it was just a matter of using flash exposure compensation to dial in the right level of brightness. Now you may think, it just took you six shots to take this little snapshot here. I promise you, you get much faster at this.

One reason being, you can probably find that you can just leave that flash exposure compensation dialed a little bit low all the time. In general I find on every camera I shoot with, the stock flash power is always too hot. I always just leave it dialed into around two thirds of a stop. So overtime you just going to develop an eye that allows you to go, you know what, I'm just going to dial it down, leave it there, take my shot. And you'll probably get it right. It's something you need to practice and part of your practice or the most important part of your practice, is just learning to recognize that shadow when its there. But a a big tip to that is anytime you see someone wearing a hat your going to need to go through the steps we went through just now.

Fortunately, it isn't difficult to get great results from flash, and in this course, photographer, author, and teacher Ben Long details the concepts and techniques behind effective lighting with flash. Ben starts with fundamentals that build on exposure principles taught in other installments of Foundations of Photography—simple techniques that improve the results from a camera's built-in flash. He then focuses on fill flash techniques and on using flash as a key light. The course also explores topics ranging from bouncing and syncing flash to shooting with one or more off-camera flash units.
Topics include: