Using duct tape and zip ties in the field 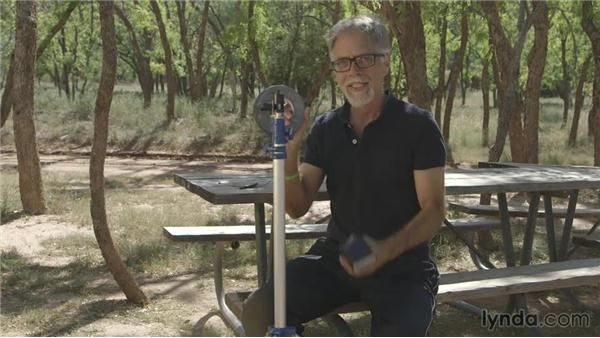 This week on The Practicing Photographer, I want to talk to you about being prepared for those times when you're not prepared. My name is Ben Long, and I am very fortunate to get to work with this incredible Lynda crew that's always prepared for anything. It's really fun to just watch, they always have exactly the right mount to pull out for something, or bracket to pull out for something else. I'm not like that. I routinely head off to go camping in the middle of nowhere and I forget my tent poles. Or I go driving and I forget my map. Whatever. So, it's not unusual for me to get out to shoot something and lack a critical piece of gear.

I want to talk about some very quick and easy things you can do if you get out and you're trying to use your flash, and you find that you don't have what you need to get your flash mounted on a flash stand. I have a stand here, and I have a flash. The stand, though, only has a quarter inch screw on the end, because I forgot to bring the thing that gives me a shoe to put the flash in. There's no there's no socket on the bottom of the flash, so there's nothing I can do, until I go back to my flash case, and remember that the flash came with this little foot.

These things are really cool. They go on the bottom of your flash and screw down, and they then allow it to stand upright. So first of all, if I can just find something that's sitting at the same level as, that I want my flash, it can actually just stand there. But if not, if I really need to use the flash stand, that's okay because the foot has a socket on the bottom. So I can actually just screw this directly into the flash stand and have a way of holding my flash. So that's a piece of gear you probably have with you that will work with a quarter inch thread. That means it'll probably work on your tripod, or other pieces of gear that you might have that have that kind of screw on the end.

Now, if you don't have one of these, or if you have one and it doesn't have a socket on the end, all is not lost, you've still got this nice, sturdy, vertical contraption here that you can attach your flash to, you just need a way to attach it. Now, I know you spent a lot of money on your flash, and it's all clean and shiny and new. And so you may be thinking, oh, it's a very sophisticated, high-tech piece of gear, I have to work through its official interface. Nah, that's what duct tape is for. There's no reason you can't just latch your flash to the stand using duct tape or gaffer's tape. And if you think, oh, if I do that, I'm going to leave sticky goo all over my flash.

Gaffer's tape is very expensive, but the great advantage of it is when you pull the tape off, it doesn't leave stuff on your flash. Now when you're taping your flash to something, you do need to give a little consideration to the fact that there's communication with your flash here, that if you're working in TTL mode, you don't want to cover this up. If you're not working in TTL mode, if you're working manually, then you've got the problem of you're going to want to get access to the controls on the back of the flash. So, maybe you want to try and tape it this way. You may have to work at it a little bit. If you don't have duct tape with you, consider the might zip tie.

I'm a big fan of zip ties for all sorts of inappropriate repairs and modifications to things. And for this one, I'm actually going to leave the foot on here because it gives me something to loop the tie around. Zip ties are very simple. They, you just thread them together like this and they, and they lock. Now before you go and put a zip tie on something, be sure you have a way with you to get it off. A pair of wire cutters or a knife or something like that, because you don't want to get it on there and then... I shouldn't have put that on first. Anyway, you don't want to get it on there and not be able to get it off.

So all I'm going to do is stick that on there, thread it down real tight. And it may not be pretty, but it'll stay there. If I've got a couple more, I can lash it on even more sturdy. Now you may be thinking, right, you brought a light stand, but you didn't bring all the other stuff? If I, if I don't, if I, if I have a light stand, why wouldn't I have all of the other stuff? Well, if you're like me, just because. But you don't have to do this with just a light stand, this will work with any tall, vertical structure. You can do this with like stoplight poles and street light poles and saplings and skinny people.

Anything that stands tall and straight in a sturdy manner, you can just try and fix your flash to it. The big lesson here is not necessarily about any of these particular ways of fixing it, but to not think of this piece of gear as so precious that you can't improvise a method to get it stuck to something. This may not look pretty, but it's going to get the light where I want it, and that's what I need when I'm ready to take a shot.

Video: Using duct tape and zip ties in the field