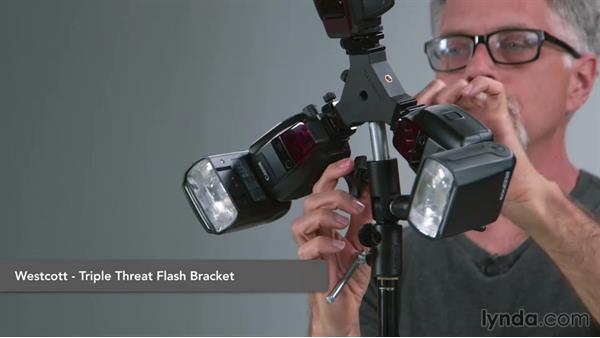 I'm getting ready for a portrait shoot and I have three strobes with me here. If you've watched my Foundations of Photography Flash course you know that with multiple flashes I can create really nice complex lighting situations. I can have a keylight, and a fill light, and back light. But there's something else that I can do with multiple flashes which is to gang them up to get me a couple of other things. And I do all that with something like this. This is a three-way flash bracket. These are cold shoes. And by cold, I mean they don't have any electronics in them, they're not going to communicate anything, and with these, I can build this cool little three way flash pod.

So what that gives me is a big increase in light. That can be really handy in a situation where I need to overpower some bright light. For example, maybe I'm shooting outside, and I want to use the sun as a backlight, which means I need a whole lot of fill light. I might be trying to shoot that with one flash and finding I don't have enough fill light. So by ganging up a bunch of flashes, I can gain that extra power. There's something else that I get from using multiple flashes that we're going to look at in a little bit. I'm putting the flashes on, on the gizmo here, and so you can see this is, is, this is all it is.

I now tilt them forward. And then, I just need to get it up on a light stand. What I'm going to do is set up on a light stand with a big umbrella, and that's going to be my light source. How to get it on the light stand really just depends on the nature of your stand. For this particular stand, I've cobbled together a couple of different little mounts and things to get both the swivel that I want and just to be able to get it onto my stand. One that I like about this Westcott three-way flash mount is it's got this hole right here in the middle, and I can stick my umbrella in there.

going to go ahead and do that. This is a nice big, this is not a shoot through umbrella. This is a reflector umbrella, so the flashes are going to fire into it. So, I've got three flashes running here and you may think, wow, that's great, you've got three times the light you normally would have. Unfortunately, the math doesn't actually work out that way. So if you think about what's going on here and you understand your basic exposure theory this should all make sense to you. With one flash at full power, I have a certain amount of light.

If I add a second flash at full power. What do I have? I have double the amount of light that I started with. And we know that a doubling of light means an increase of one stop. Adding a third flash at full power does not get me twice as much as these first two. It only gets me half again as much so I've actually only got a stop and a half more than I would normally get when i'm using three flashes. So it's not as huge an increase as you may think it is to get an additional two stops of light I would need to be using a total of four flashes.

So, you may think that oh, I had a second flash, I got double the light, I had a third I get triple the light and it, it just doesn't work that way. To get, an additional three stops, I would need a eight total flashes. To get an additional four stops, I would need 16 flashes. After a point, it's just better to go buy a really bright light. Still, this does get me some additional light. As I said, in situations where I really need to overpower ambient light and things like that this is great. In the studio, I'm probably going to be able to get by with just a single flash, so why have I rigged all this up? Well, because by adding these multiple flashes, there's another really good kind of sneaky gain that I get.

And we're going to see that when I do my shoot.