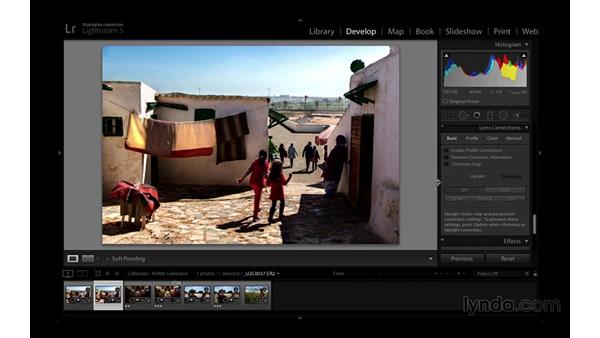 Join Ben Long for an in-depth discussion in this video Understanding lens profile correction, part of The Practicing Photographer.

- Camera lenses have lots of different properties and characteristics an idiosyncrasies. Even a great lens, even a well made expensive tack sharp lens might have some characteristics that need to be corrected from time to time. Perhaps vignetting, a darkening in the corners, or distortion, barrel or pin cushion distortion where the image looks like it's wrapped onto a sphere. Lens flare can be an issue. These are all things that we fight as photographers and fortunately with the latest versions of Lightroom and Camera Raw you have some new tools for fighting certain problems that can come up with a lens.

This is something you may already know about but it's also a really easy thing to miss in both the Camera Raw and Lightroom editing tool boxes. I'm talking about lens profile correction. Adobe has profile, the huge array of lenses and built those profiles into Lightroom and Camera Raw and using the data in those profiles those applications can automatically correct certain problems in your images. Let's take a look at what I'm talking about here. I'm in Lightroom 5, I've got an image open here, this is straight out of the camera.

I was shooting with a 5D Mark III with a Canon 25 to 105 L. I'm going to go into the develop module here. Get this stuff out of the way. And it looks like actually this isn't straight out of the camera I've already done a little bit of tone correction here. But over here in the toolbox in the right side I'm going to scroll way way way down until I get here to the lens correction panel. And here in the basic tab right off the bat there's this innocuous, innocent looking little checkbox that says "Enable profile corrections".

If I check that, the image is going to change. So keep your eye on the image as I check the box and boom, two things have happened. Let me uncheck it and you can see it again. Watch the corners, there's bad vignetting in the corners and now it's gone. And there's some spherical distortion which you probably already noticed the movement. Watch the middle of the image right in here as I check the box. That spherical distortion is corrected and it really changes a lot of the geometry in the scene. These lines become truer and the two girls in the middle of the frame actually get a little bit larger which is nice, they're the subject of the image.

And that's a single checkbox that does that. Now you may be thinking, " Oh but I liked the vignette in the corner "it brought focus to the center." That's fine I can always put that in on my own using the vignetting tools that are built in to Lightroom. So I much prefer correcting the image and then putting back the aberrations that I like. I have more control that way and I really gaining that spherical distortion correction. After some additional edits this is my final image with some basic tone control.

So I really like that, again after additional editing some straightening, I end up with this. In addition to different lenses on the same camera I've got lots of different camera's. So here I am, this was shot with a GoPro and clicking the box gets me a huge change in spherical distortion. The GoPro surprisingly does not have that much vignetting but wow look I actually look thinner in the uncorrected version I might keep that one. Anyway, so here's a really easy way to fix the GoPro which is a little bit notorious for it's kind of fisheye look.

And again, final corrections it turns out I did not enable the profile corrections before. In this case I can actually fix them after. Usually it's best though to do that profile correction first because if you take the image to an external editor and comeback you may have cropped the image which will mess up its ability to correct spherical distortion. It might also at some point along the lines strip out the camera meta data and then Lightroom won't know what lens you were using, what camera you were using. In general if you are using a fixed lens camera you should find that there is a profile available for your camera.

I have found very few pointing shoots that aren't in the library. And there are cellphone profiles as well. This was shot with an Iphone. A quick check of the box. Not too much that needs to be done. There's no vignetting but there is a little bit of spherical distortion. Curiously there are times where I enable profile corrections, it fixes the image and I go, "Hm, no I want it the old way." there are times when that distortion that's in there is because it's what you were seeing in the viewfinder, it's part of your composition process you actually want the distortion in there.

So I'm not saying you have to go through and turn this on all the time. It's why Adobe doesn't make this a stock feature in their raw conversion. There are times when you want that distortion in there but it's worth getting in the habit of checking it for every image. I'm surprised how often I'll forget and then go back later and realize oh I really should have done this before I did all these other edits. So again it's way down at the bottom which makes it easy to forget but start digging through some old images, turning on the profile correction, see the difference it makes. Once you've gotten used to using it it's going to be hard to turn back.