Understanding the labels on SD cards 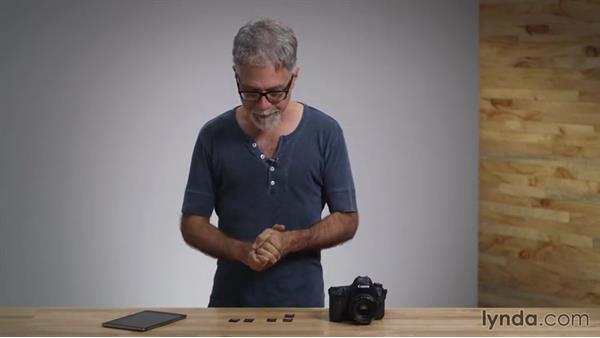 - I was out shooting the other day. I was in Death Valley and it was raining which doesn't happen that often, and the sun was setting, the light was perfect but it was changing really fast. I was eager to get the shot. I was taking an HDR panorama, so I was needing to shoot nine or twelve images, and I needed to do it quickly before the light changed. And I overran my camera, meaning I shot three, I panned, I shot three, I panned, I shot one and then it stalled. If you've had that experience, you know how frustrating it is. I had to try and hold the shot and wait and then try and get the other two.

I was shooting with a small Canon Rebel and I'm used to shooting with a 5D Mark III which never gives me that problem. And so I thought, wow, either my card is too slow or the Rebel's buffer is too small. I don't know what. So when I got home, I started looking into it. The Rebel uses SD cards and SD cards come in lots of different speeds. But those speeds are represented with about three different symbols on the card and it can take a while to figure it out. So this week on "The Practicing Photographer" we are going to delve into the hieroglyphics of SD cards and try to understand what all these little symbols mean.

The reason you would want to do this is you need to get a card that's fast enough to be able to keep you out of the situation that I was in. But you don't need to spend extra money on a card that's faster than your camera needs. So I'm going to go over some of the nomenclature that you're going to see on these cards. I keep looking down which you may think that I'm really sad about SD cards and that's not it. There are so many little symbols on this card. I'm trying to figure out where I'm going to start here. So, obviously there is a capacity on the card expressed in gigabytes. That part's pretty easy to understand. The bigger the card, the more you're going to be able to fit on it.

Also potentially, the more you're going to lose if something goes wrong with the card. I've never had an SD card fail. I don't worry to much about that. Your next concern is a classification. You're going to see either SDHC or SDXC and they're going to have these logos. If you've got a really, really old card, it may just say SD. Technically that's SDSC, but they never really labeled it with that full specification. You probably can't even buy one of those anymore, so you may not have those. SDHC or SDXC is simply a measure of the maximum capacity of that format of SD card.

SDHC could only go up to 32 gigabytes. SDXC can go all the way to two terabytes. Now that doesn't mean the card is expandable or anything. It just means that that's the maximum size that that format will allow. The reason that you care about that is you're going to want to look at your camera and see if it supports SD, say XC. If it doesn't because it's an older camera, then sticking an SDXC card in your camera probably isn't going to work. You're going to need to limit yourself to SDHC which means you're going to be limited to 32 gigabyte cards.

So you know that it's not really fast at reading but gonna take a while to write. It's also 10 megabytes per second of read or write onto a fragmented card. So even if there's not a contiguous space available for the picture you're trying to write, it'll still be fast enough to get it written onto that card. Now, if you have an SDHC or SDXC two card, the roman numeral two, you may not have that class rating in a circle. They're just not even bothering to specify that kind of backwards compatibility.

Don't worry about it if it's not there. If you're buying that kind of card, which is going to be more expensive, it's probably because you've already checked into your needs and found that you need UHS class two because you're trying to shoot 4K video or something like that. Alright, so what we've got here, so far, SDHC or SDXC, those are measures of maximum capacity of that format. A roman numeral one or a roman numeral two, those indicate UHS class. That's Ultra High Speed. Your camera may or may not support that. Also note that if it is class two, the card is gonna have this extra set of pins on it, on the back.

So it doesn't effect how you use it but that's another way of identifying this card as a UHS two card. Now there's another symbol on the card that specifies or let's you see UHS class. And that's this symbol which is a U with a number in it and there's gonna be either one or a three. So that's class one or class three, 10 megabytes per second, or 30 megabytes per second. Alright, I know from looking at my manual this is a Canon 6D here. I just looked at the manual for it. It supports SDHC or SDXC.

The manual told me that. It also said that it supports UHS. So I know that I can get one of these SDHC or SDXC, UHS one cards and I'm gonna have a minimum transfer speed of 10 megabytes per second. That still, though, doesn't tell me, necessarily, everything I need to know about the card I may be using. For example, I have here an SDHC card that does not have a roman numeral on it or the UHS indicator on it.

What I can't do and then I'm wondering about is there are cards available that are 60 megabytes per second. If I compare the 45 to the 60 and there's no difference then I know that 45 is all I need. If I compare the 45 to the 60 and the 60 is faster but the 60 is not as fast as the 95 then I know I don't need anything between 60 and 95. Here's the bad news. I'm able to do that because I've borrowed a bunch of cards with a bunch of different speeds. There's no specification in the manual anywhere.

So I can't really just look this up and find out. You can search around on the web and see what other people have been doing. But at this point, my concern for my cameras is I know I want at least class 10. But above that, I think for my cameras I want around a 60 megabyte per second card because that seems to be possibly a good balancing point between 45, which I know my camera can do, and 95, which it probably can't. So I'm paying the most attention to that number.

There's some other things on this card. Some of these cards say SanDisk Extreme on them. And some of them say Extreme Pro. That's just branding. None of those indicate anything about performance. That's just something they've chosen to do. It gets even weirder. Some say Extreme Pro on a gold background. Some have it on a black background. I don't know. Maybe that's just style. My last concern is reading these cards when I get back to my computer. I need a card reader that supports all of these same specifications. Speed is not going to be as critical there, but I do need to know that if I want to really take advantage of this UHS stuff when I'm going into my computer, I need a UHS compatible card reader.

Now that's compatibility going into the card. To get the maximum throughput coming out, I want to be sure it's USB three. So I want to pay attention to that. I may need to upgrade my card reader as I go to faster cards. So, simple, that's it not even in a nutshell, that's more like a watermelon husk. I know it's complicated. You can Google a lot of this stuff. The actual SD governing body has a website up that has some good information. The Wikipedia page for SD goes into all of this and a lot more, and some of it's pretty interesting.

Secure Digital means there should be some secure thing happening. And it turns out, the format does have a lot of digital rights management built in. I have never seen any of that used. So it's interesting to learn about that. Finally, just so you know this story has a happy ending. I did get the shot and it looked like this. It was really a spectacular day. I gave up on the HDR thing because I couldn't get my camera to work quickly enough. So this was just a straight center dynamic range image that I stitched together and then edited. So if you're shooting with an SD camera, it's worth digging into some of this stuff to be sure you're getting the most bang for your buck when you buy a card, and getting the best performance you can out of the camera you're shooting with.