Understanding how to use the Wi-Fi feature in some cameras 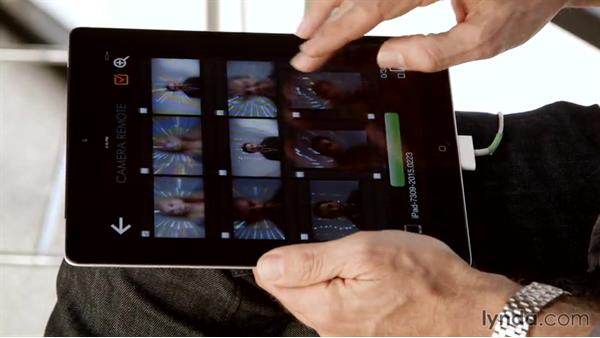 - A lot of cameras these days offer built-in Wi-Fi. It's a pretty new feature, not everyone's got it. I've got two cameras here that have built-in Wi-Fi. I have a Sony, a very nice point and shoot called an RX100 mark III. They actually sell three different versions of the RX100 and Wi-Fi is one of the additions they made to the mark III. And this is the Fuji X-T1, which also has Wi-Fi built in. They work with custom apps on iOS and Android to provide both remote control for the cameras and a way of getting images out of the camera and into those devices, and that becomes pretty interesting because it means that your phone or tablet becomes basically a cellular connection for your camera, if you want it.

They all seem to work pretty much the same way, which is the camera can turn itself into a Wi-Fi hot spot and then you connect the device to it, and then you can start doing things. I'm gonna use the camera's Wi-Fi network. It actually tells me the name of the network here. FUJIFILM X-T1-53BB. So, I just connect to that. Obviously I'm cut off from the internet now, so it's not like I can go immediately from the camera out to the web or something, but I can get images in here. And so once I do that, I can now just browse the images that are on my iPad, or I'm sorry, on my camera, and when I find one that I like, I can grab it and download it.

So, every app's gonna work differently. There are a couple of things to keep your eyes out for when you're doing this kind of thing. I normally shoot in RAW, and early versions of the Fuji app could not transfer RAW files. However, a lot of cameras these days now know how to do a RAW to JPEG conversion internally. So though I don't really wanna shoot JPEG, I could continue to shoot RAW, have it convert the images that I wanna transfer to JPEG, move those over, and get the functionality that I want that way.

Once the transfer is done, I've got the image here on my iPad. What's nice about it is now I can edit it, email it, post it, social network it, stick it on Flickr, whatever, and like I said, end up basically having a cellular connection to my camera. The other functionality I get is remote control. I can use this to drive time lapses, I can use it as a remote trigger, I can even use it as a remote view-finder. So if you tend to work a lot with your camera in odd places, that can be useful. If you want field workflow with your camera and you don't wanna have to take your computer and a card reader with you, this is a nice way to get that same functionality.

So when you're shopping, that's just something to keep your eyes out for. If you're wondering what Wi-Fi is for, those are the uses for it. If you don't need that kind of functionality, there's really no need to spend extra money for it because all you're gonna end up having is a really nice battery drain.

Video: Understanding how to use the Wi-Fi feature in some cameras