Understanding how to compose with an empty sky 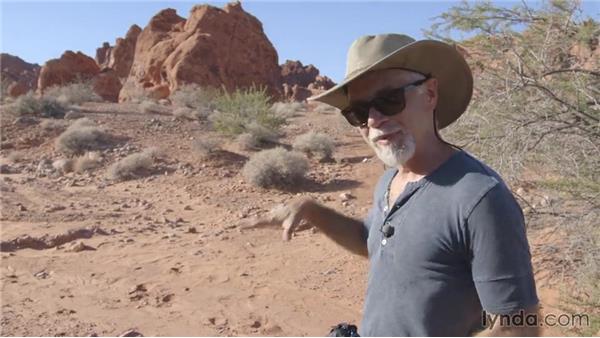 Join Ben Long for an in-depth discussion in this video Understanding how to compose with an empty sky, part of The Practicing Photographer.

- Landscape shooting requires a lot of planning. You got to find the place you want to go, you got to pick a window of availability, you got to travel a bunch. And it's not like normal vacation planning, because, most of the time when I'm planning on going on a landscape shoot, particularly out into the desert or open wilderness area, I'm really, really hoping for bad weather. I really want storms blowing through, horrible, catastrophic monsoons and things like that, because blue sky is just so boring. There's nothing I can do with it compositionally.

And most of the time, you come out to the desert and this is what you get. It's just searing sun and an emptyless sky. So what do you do with it? Well, for a while, blue sky can actually be kind of interesting, and there are times, of course, when shooting with this sky is fine, particularly at sunset when it's changing colors very dramatically. But here, the light has turned in my favor but the sky is still pretty boring. I got this lovely rock formation up here, and if I start playing with it, just with the sky, I don't ... there's nothing in that top half of the frame.

It's just not interesting. So what can I do in this situation, because there's not a cloud in the sky. There's some on the horizon way over there, and they're laughing at me. It's not going to change. So I've got to work with what I've got here. First thing I can do is, just consider cropping the sky. I got up a little higher earlier and took a broader shot, with the idea that I'll crop it down to something long and skinny and just simply try to eliminate the sky. That can work for some shots. But I think there's a more interesting way to work, which is not fight the empty sky, just think about what else you have to work with.

In this case, what I have to work with is the ground. So I'm going to compose in the other direction. Rather than packing the frame with lots of sky, I'm going to pack the frame with lots of ground. This makes that big rock feature more of a background item than a great subject of an image, but I get a couple of things. I get a well-composed shot here. Here, I'm balancing these rocks in the foreground off the big rock in the background, and I like this, whatever you call this thing here, this long stretch of rock over here.

So I can play with that kind of stuff. Though I have lost that huge rock as the subject of my image, what I am doing is creating an image that is really evocative of this place. This is what I experience when I walk around. I'm spending a lot of time looking in these dry washes and things, so actually, this has led me to more of an authentic representation of the scene, rather than I just pick up the hero formations and shoot those. Now, for doing this kind of stuff, my first recommendation is, go to a wide lens. I'm shooting on a crop sensor Cannon with a 10 to 22-millimeter lens.

That's the equivalent of a 16 to 35 on a full frame camera. And what that lets me do is really exaggerate all this stuff on the ground. And because the light has gotten low and contrasty, I'm picking up lots of texture. And that's giving me a lot of extra geometry to play with, a lot of graphic lines to play with. I am being careful about depth of field, so I'm shooting with small apertures and I'm paying a lot of attention to where I'm focusing. I'm focusing about 1/3 of the way into the shot. In other words, I'm making sure that the front of the frame is in focus because I know that my depth of field is going to go a long way back.

And if it doesn't go all the way back, that's probably okay because the things in the distance are going to be too far away for me to really discern in sharp focus. So here, again, I'm just balancing this foreground thing against the big rock in the background. I'm trying to be careful about using up a shot before I walk into it, because the sand is collapsing underneath me. To play up the ground even further, I'm going to do another thing, which is get down on my knees and really put a lot of ground in the foreground. And that starts getting me lines that I hadn't even noticed before.

Oh, there's a footprint. So changing vantage point is cool. It also puts that red thing on the horizon ... oh, it just changes my relationship to it. And now, going all the way down here is probably too far because what I'm at now is so highlighting this thing that is makes the viewer go, "Well, I guess he really wants me to look at that thing." And then you look at it and you go, "That ain't much of a thing." So I need to be careful not to overplay the foreground. I want it to guide the viewer's eye.

I want to use the lines in the foreground to lead the viewer through the image, just as you should in any good composition. Most of them are leading ultimately back to that rock. So I feel like these compositions are working. So when you're facing that dull, boring, empty blue sky, although this one's full of helicopters all of a sudden, but other than that, it's completely empty. When you're facing that empty blue sky, don't just think, "Well, I've got to have blue sky." Don't think, "I'll replace the sky later "with something else." Think about the ground. The ground can be really interesting. It's what we walk on. We're used to seeing it.

We have a relationship with it. This is a chance to feature it in your images.

Video: Understanding how to compose with an empty sky