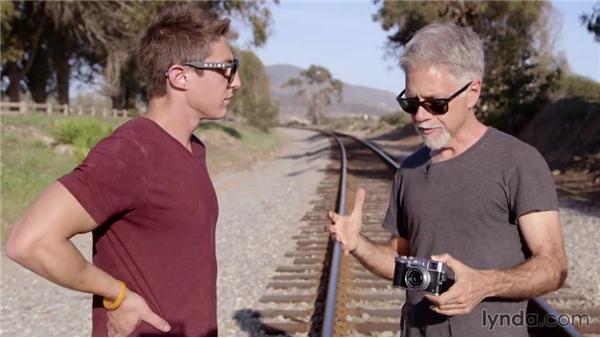 >> So my friend Zach here does a lot of flash photography, and he's interested in getting a new camera, and I wanted to show him something, so I dragged him out here to the railroad tracks so we could have a conversation, as one does. So, Zach, you, you know how a shutter works in a normal SLR. >> Yeah, most shutters in normal SLRs are vertical shutters, and they're actually two curtain shutters, so one shutter will fall, and then the other one will fall right after and then that'll expose your image and have the light hit the chip >> Okay. Very good, yeah and, and film cameras worked the same way. Often, they went horizontally. But it was still a, a first curtain and a second curtain.

What I have here is a Fuji X100S. I really like this camera because it's an, it's an APS size chip. It's got a fixed 35mm equivalent lens. Really good in low light. I really like it for street shooting because it, it doesn't make any noise when you shoot with it. It's a, it's a really nice, surreptitious little camera. But what's interesting about it is it has a leaf shutter, so rather than two curtains, it's got a series of interlocking blades that opens and closes. And given your predilection for flash, what's cool about this is unlike an SLR, with this camera, I can have flash sync at any shutter speed.

So, with your SLR, you can't shoot flash with a shutter speed faster probably than a 200th of a second. Because one shutter starts to open, and the other starts to close right behind it. And so, as you said earlier, ideally you want the whole sensor exposed. And. >> Absolutely. >> Normally it's not. With a leaf shutter, the full sensor is always exposed during any exposure. So, what that lets me do, is use really fast shutter speeds when I'm shooting with flash. This camera actually has a little built-in flash that does a really good job. What I'm going to do now is show you something that I can do with that ability of having a faster shutter speed.

So, I'm going to take a quick shot of you. >> Okay. >> I'm dialing my exposure compensation down to minus two. I want shallowed up the field of you so I'm open up to 2 8 and that meters with a shutter speed of a thousandth of a second, which normally, at a thousandth of a second, I wouldn't be able to shoot flash on an SLR. But with this camera, it's no problem. And so, when I take the shot, I get this cool effect where the background is really dim, but you're illuminated by the flash. >> That's beautiful.

Yeah. >> So that's something that I can't normally do with an SLR. Now, I can, if I've got a flash that has a special high speed sync mode. And we've actually done a practicing photographer about this where we show how you can use special flashes and high speed sync to get this effect with your SLR. But you've got it just. >> It's there. >> Just walking around, yeah. So, this is a good thing for you to consider. There are a couple of caveats. One weird thing about a leaf shutter is it's also the iris of the camera. And so, that creates some problems if you want to do what I'm doing here, which is shoot really wide open with a fast shutter speed.

Because if your aperture is open this wide and you wanted to close really fast. Sometimes it can't do that, so this camera actually has two stops in neutral, density filter built into it that you can turn on. >> That's fantastic. >> To, to get your shutter speed down. Yeah, so it's in different considerations, but overall >> Yeah. >> it's a really nice alternative if, if you're into, into flash shooting. So that's the Fuji X100S. It's a leaf shutter, it's not the only camera in the world that has leaf shutters, a lot of them do. And if you're looking at old cameras, or medium format cameras or things, and you see that term. That's what it's referring to.

And so again, if you're wanting a lot of flexibility with flash and shutter speed. Going for a camera with a leaf shutter might be a good way to go. And that looks good on you. >> Thanks man.