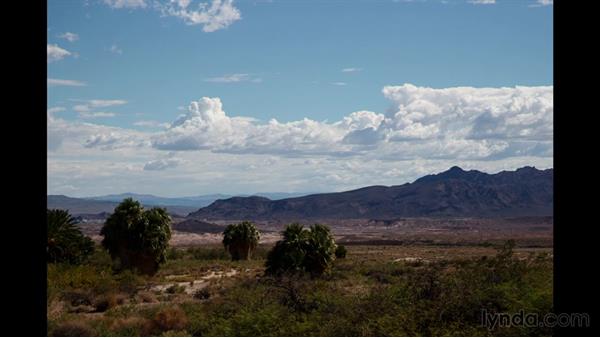 Join Ben Long for an in-depth discussion in this video Tips for shooting panoramas, part of The Practicing Photographer.

- These days, most people have some experience shooting photographic panoramas. I'm talking about shooting a series of frames and then using software to stitch them together. Even if you've never done that with your normal camera, you might have done it with your phone, and nowadays, phones have automatic stitching built in, so it's very easy. When you're working with your SLR, it's a little bit different, I'm going to just go over a couple of quick panorama tips, in case you're new to panoramas, or have been frustrated with the panoramas you've been shooting. So I'm standing out here in the desert, around this incredible oasis. Just behind us over there, there's a natural spring that's pumping out a tremendous amount of water, and somewhere along the line, some palm trees got planted.

In the distance down there, I've got a body of water, I couldn't begin to tell you which one that was, I haven't looked at a map in awhile, and some nice mountains, and clouds behind it. So I would like to get a section of this. Now, I've found a hill so I can get up a little bit higher so that I can have less of a straight look across the ground, I can have a little more landscape in the foreground. I can actually frame this shot with a single shot, just because my lens is wide enough, and it's not even that wide.

I'm at 28 millimeters on a crop sensor camera, so that's the equivalent of a 28, and that's like a 40 millimeter lens or so. So I'm not even having to go that wide. And I get this. And the reason I'm not crazy about that image, is first of all, I don't need all that extra sky. That's fine, I can crop a lot of that out. But also, that wide... The mountains are too far in the distance. I'm not getting the relationship that I want between the foreground and the background. I can improve that relationship by zooming in.

So if I zoom in and frame up a shot like this, that's working better. The mountains are more pronounced, they actually look a lot more like what I'm experiencing right now as I stand here. And as the clouds over there they're a really nice, dramatic feature. So I don't want them small and distant. So that's why I'm thinking of doing a panorama. It's not because I'm looking at such a wide, sweeping vista, I'm only actually going to grab a little bit. I'm choosing to use a panorama, instead of a single shot, because I want to be able to go more telephoto. So, I'm going to just quickly knock off a test here.

I am shooting in aperture priority mode, because I want to set my depth of field and be sure that it's going to stay the same across all my frames. If I was in program mode, there's a chance that the camera might vary aperture from frame to frame. Probably not, but still, better safe than sorry. So I'm going to stay in aperture priority mode, I'm in F11 here, so I know I'll have a whole lot of depth of field in this image, and before I shoot anything, I'm just going to try and figure out where I want to go, so I'm going to go from about here to here. So I'm not doing much. Now notice, as I'm panning the camera, I'm not doing this.

Because when I do this, I end up rotating around this point right here, I want to rotate around here. So I am turning the camera, and moving my head around to get behind it. And what I'm looking at here, is trying to decide if there's a big exposure change between the left side, and the right side, and it doesn't look to me like there is. The whole thing is pretty uniform, because I'm not going that far to the right, the sun's over there. So I really don't think I even need to worry that much about exposure. I'm just going to fire away here. So I'm focusing, and taking my first shot, rotating the camera, and I tend to do a lot of overlap.

Most people say you only need about a third, I do a half just 'cause it's only storage it's easy enough to take more shots, and I'm going to do three of them. So here's what I got. Now I have no idea if that's going to stitch well or not. There are a lot of things that can go wrong in the stitching. If I have not kept the camera perfectly level, as I panned, I will need to crop the image a lot. The image will still stitch, it's just I will lose some foreground to a crop. So with that in mind, I'm actually going to zoom just a tiny bit, and give myself a little bit of padding here.

Another thing that I've done, is I've configured my camera so that auto focus is no longer on the shutter button, auto focus is now on a button back here. That means I can focus once, on my first frame, and know that all of my other shots are going to be in focus. This is important sometimes with shooting panoramas, because I may pan to the next frame, and now my focus point is on empty sky, way, way in the distance, so I'll have, not only a change of focus, but my camera may not be able to lock focus, so I really like being able to just focus once, lock it in, and then shoot the rest of my panorama, so I'm going to just do the same panorama again.

I always do two or three tries, just to be sure... That one of them is going to stitch well. Now, if I was concerned about exposure, I would want to lock my exposure settings somewhere. There's a couple of different ways I could do that. What I would choose to do first of all is, pick something in the middle of the panorama. So if I'm panning from here to here, I would probably pick this area right about here. I would meter the scene, and look at my exposure settings. So I'm at a 200th at F11. I have two choices now. I could switch to manual mode, and dial in one 200th at F11, and then just shoot and know that everything's okay, or, I could use the exposure lock feature on my camera.

On a Canon camera, that's the one with the little asterisk on it. So the way that works is I pick my shot, I meter, then I press the exposure lock button, now the camera will stay locked on that exposure for eight or 10 seconds or something after my last shot. So now I can work to shoot the rest of the shot. I really don't think I'm going to need that in this panorama, but I'll do it anyway, just to ensure that I have the same exposure across the whole panorama. That means that when I stitch it, there will less chance of a change in tonal value across one of the seams.

So that's another way of improving the stitching as I go. Obviously, if you're really, really serious about this, you would want to set up with a tripod to get a smooth pan. The fact is, I rarely use a tripod when I'm shooting panoramas, and that's usually because I'm not shooting 180s, I'm usually shooting a small chunk like this, and with those, I find that if I'm careful, I can do a hand held just fine. And the trick to that, is holding the camera very steady, as always I got my elbows in at my side, and I'm panning the camera not my body. So the last thing I do is what you've just seen me do.

I, for want of a better word, bracket my panoramas, I always shoot them several times with slight variations in focal length. I go to the zoomed in as far as I want, and I shoot that, but then I pull back a little bit, to give me some cropping padding. Here is my final result, I think it works pretty well. The light's a little flat right now. Sometimes, you've gotta shoot in those circumstances, because that's the time of the day where you find yourself in the location. But I got what I wanted, I got a wider view, but with the foreground to background relationship that I like. There are some things that I see that I might do differently.

Get down lower to put the tops of the trees up above the mountains, rather than have them all tucked in together. Those are ways of implying more depth in the scene, things like that, and I do that just by changing my height. But overall, I think this is a technique that's worked well. So don't just think of panoramas as, oh, now's my chance to catch all this wide stuff. Sometimes, it's, yeah, I want it a little wide, but I'm going to use a panorama, because I want to control the foreground to background relationship.