Taking a quick portrait and directing a subject 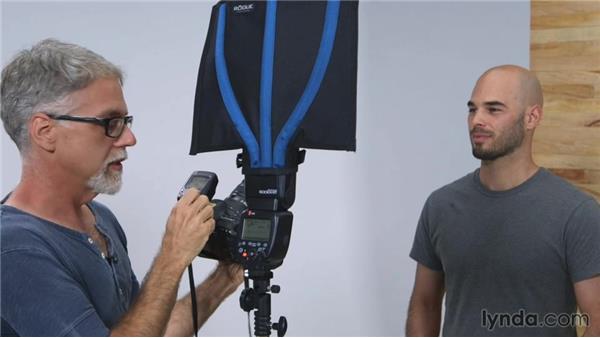 - One of the scariest things that you might face as a photographer is going and taking a picture of a stranger. You've probably encountered this already. You're on the street and you see someone really interesting or someone doing something that is really interesting and you wanna take their picture, you're afraid to go up to them. And with good reason, walking up with a big camera and getting in someone's face can be intimidating, maybe you don't want to offend them. You might think, well, I'll take the picture and ask them later. You can try that, that sometimes works. One of the things I notice with student who go out to shoot people on the street is they get up their nerve, they ask for the favor of taking a picture of someone, and then they get all timid because they think, "Oh, this person's doing me a favor.

"So, oh, I just have to take a couple of shots "and work quickly and be nice and get out." That's not quite the right approach. If they're doing you the favor of offering themselves as your subject, the best thing you can do is everything that you need to do to make the most use of their time. You want to come out with a good picture whether they see it or not and that means that maybe timid is not gonna get you that picture. You've got to do that work that you legitimately have to do which means you might need to take some control. This is kind of the situation I'm in right now and its a shame that I'm talking so much because the fact is Brett needs to get out of here and I'm supposed to be taking his picture.

So, the best thing I can do right now is to get very serious about the process of taking a picture and really try to work it. Now, what can become weird about this is if he were a total stranger I would find myself bossing him around and that can feel very uncomfortable but the fact is it very often makes your subject feel more secure because they go, "This guy really knows what I'm doing." If you think about it, if someone came up to you and said, "Hey, can I take your picture?" and you say, "Oh, yeah, okay." and you stand there, and they start telling you things and acting like a real photographer, you're gonna go, "Oh, this is cool, this real photographer's taking my picture." So, even if you're not a real photographer just act like one, that's what I'm gonna do.

Hey, Brett, I'm wanna take your picture. Trust me, I mostly know what I'm doing, and so, in this case, we don't have a particular goal. It's not like, I mean, we're in a studio. It's not like I thought, oh, here's Brett working at a blacksmith forage, how interesting, or something like that, and so I wanna take his picture. It's more just he's got a really striking face. I think there's a very good portrait to be had here somewhere. I don't know if we've got enough time to do it but that's how it often is on the street. I'm gonna start by picking a more flattering focal length. I'm gonna go at around the equivalent of seventy five or eighty millimeters.

This is at seventy so it's a cropped sensor and... (click) And, and what I really need is some light. So, I happen to have some lighting here and I'm gonna tell him that, Brett, I'm setting up some lights now and the reason I'm doing that is because the light on you right now is just kind of flat and I think that we can bring out your eyes and some other things. I'm doing anything I can to make him believe that I know what I'm doing and in the process I'm gonna keep him relaxed and it's gonna make me feel less worried that he thinks I'm wasting his time.

(click) And that's gonna make me more likely to do the things I'm supposed to do like turn on the flash when I'm shooting. Now, normally you're not trying to talk to someone else, talk to a camera at the same time. I have to work quickly here because the fact is he was supposed to leave a while ago but I just keep talking. Okay, that's a good start. So, now I've got some basic lights in place, I'm ready to work here. Brett, could you turn this shoulder more towards me, yeah, and look, I'm looking for more of a, looking to, yeah, there we go, yeah, that's a stronger position that, yeah, good.

Now, the problem is you're taller than I am. Can you put your chin do-- (laughs) Yeah, go ahead, thank you, this is great. He's offering his own suggestions now because he thinks I know what I'm doing. And that's good, good, nice smile. I think the batteries in my flash are dying because they're not recycling that quick. That's making me look less professional but that's okay and that's pretty good. Now, we've got some good things here. I'm gonna go a little more out there. You have really great eyes and I wanna just really do something with that.

So, I'm gonna zoom in real close here. So, I know I'm right in your face and that may feel weird but I'm getting just a nice crop here. Like that... Yeah, I'm liking that a lot. Now, comes the difficult part, I feel like I've got what I want and I'm ready to let him go back to whatever it was he was doing. Do I show him the images or not? He's dying to see them, I know he's dying to see them but I haven't really looked at them that closely yet. I don't know if maybe they're actually lousy.

I also don't know if maybe they don't need some editing. No, they're actually pretty good. So, in this case I think I am gonna show him. This is where I ended up, I really like that shot, yeah. Flash didn't fire but when it did we got some good stuff. There's another way around this though which is to say I'd love to show you these once I get them ready, do you have an email address? Or if I have a card that has my Flickr account or something like that I can give it to him and say: these'll be up in a week, take a look at 'em, and thank you very much. This is the important part, right here. (laughs) It's important not just because you might wanna go back and shoot him again sometime and when you really open to someone and letting them know that you really know what you're doing, you'll be surprised what happens.

A lot of times, particularly I notice in small towns, people will go, "You know, I collect small horses, "would you like to come see them?" and suddenly you've got access to this whole thing that you didn't have access to before which is really great and that's what happens when they believe they can trust you and they see that you can do good work. So, I feel much better about this having pretended that I knew what I was doing and I think Brett seems pretty relaxed here. So, I think this went pretty well. So, remember when you're out, they're not the only one doing you a favor, you're doing them a favor by doing the best work that you possibly can.

Video: Taking a quick portrait and directing a subject