Taking a flattering portrait with flash 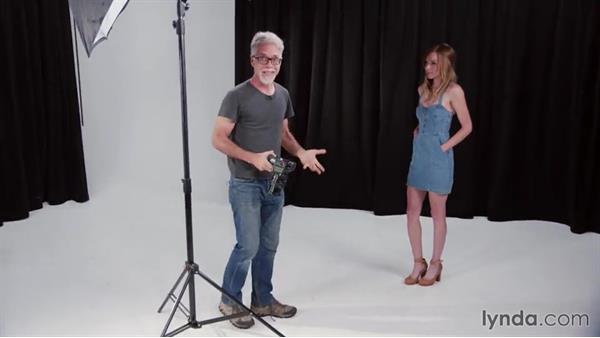 Join Ben Long for an in-depth discussion in this video Taking a flattering portrait with flash, part of The Practicing Photographer.

- Learning to get good results with flash takes a lot of practice, and one problem with practicing flash is you gotta have somebody to shoot. So a lot of times you'll think, "Oh, I'm gonna go out and learn flash." And then you find, "I don't really have a subject." So you don't end up doing the practice, and so it can just be hard to get good at. You might really notice this when someone comes to you and says, "Hey, you're a photographer. "I need a portrait, or I need a headshot, "or I need a picture for my website." And you go, "Great, I'll break out my flashes." But then you realize, "Oh, that's right. I never got around to practicing, "I don't really know what I'm doing." So, what I want to show you right now is a really simple, foolproof way to get a great flash shot with a single flash.

Chrissy has shown up, she needs her picture taken. She wants a nice, simple headshot, a nice portrait. We've got a pretty evenly lit place here, we could be standing under a tree outside. Something, any place where there's just nice, even ambient light. I have a single flash. I'm communicating with this flash with a wireless transmitter. It could just as easily be an off-camera sync cord, or something like that. I've got a stand and I've got this umbrella. Now, the umbrella is a nice modifier that's going to create a big light source. It's gonna create a big, broad light source, and that's gonna be good for getting some nice light on her.

The tricky thing here is positioning. Normally, the tricky thing is positioning. What I'm gonna show you right now is that actually, with this single flash, there's a very simple position I can do that's gonna immediately give me good light. I'm gonna raise this up here. I'm basically just pointing it directly at her. It's like a bug with a magnifying glass, That's what I'm doing to Chrissy, but everything's gonna be fine, I promise. I just wanna make sure that it is coming right at her. So what I've done, is I've put it directly in front of her, and I've got it up high.

That's going to wash a bunch of light right down onto her face. It should give really even lighting on her face. That's gonna make sure that I don't see any darkness under her eyes. It's going to, Chrissy's got fantastic cheek bones, it's gonna accentuate that. I'm gonna get a nice, soft shadow under her chin, and, I should get a really good, strong catchlight in her eyes. That's it, I think I'm done. With this, I should have great portrait light, and now we can not worry about lighting and just do some shooting. The rest of what I'm doing is basic Portrait 101 stuff.

I want a slightly telephoto lens, meaning slightly longer than a normal lens. I'm working with a full-frame camera, so that's gonna be around 80 on my zoom lens here. I'm just focusing on her eyes and firing away, and this is what I get. Right off the bat, first shot, I've got a nice, even light. It's a little bit hot in places, the highlights on her shoulders and things. And I often find that with my Canon flashes, the metering just chooses something that's a little too bright. So, I'm gonna dial my exposure compensation down one stop.

And get another shot. I'm kind of considering these as just practice shots. Just trying to find the lighting, once we get the exposure right, then we can go in and do the real work. Now, it's often a good idea to get that done ahead of time. It's a bad idea with a model, to take a shot and then go, "Oh, wow! Whoo!" It really, probably doesn't do much for your confidence and my ability as a shooter, here. Once your model goes un-confident, they shut down and they just don't look their best. Chrissy, you look great, and I have to say, I've done a masterful job with the lighting here.

Now, we can just do some work here. I am framing up some portrait orientation shots. I'll get some landscape shots, because I don't really know what she needs. I'll drop her right in the center of the frame. I'll go a little bit wider, put her on the edge. She's doing a great job of making sure that I have something different every time. And if you're working with someone who's not a professional and doesn't know what they're doing, that's a good tip you can give them. Say, "It doesn't do me any good to have the same "shot of you over and over." Ask them to move.

She's breathing through the whole thing, your face relaxes when you take a deep breath. We're getting a lot of really good stuff. Actually, Chrissy, look down again, that was a nice, alternate thing there. Oh, wow, frame is good. I'm outrunning my flash recycling there, so we'll get another. At no time during this am I having to worry about the lighting. This, again, is a very simple, very fool-proof way of immediately having a great portrait shot. Thanks, Chrissy. - Thank you.