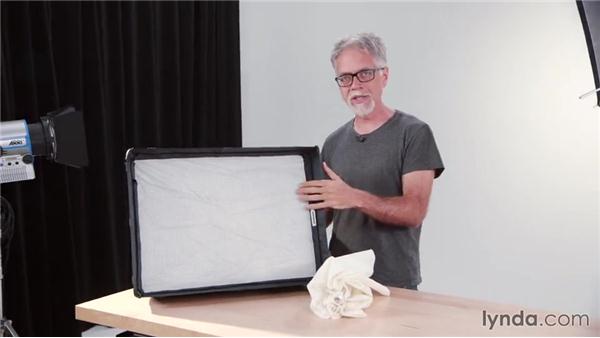 - A lot of people are intimidated by using flash with their camera, and I think most of the time that's because they use a bare flash. Very often, the trick to flash is to modify it and if you've seen my Foundations of Photography Flash course, then you know that there are a lot of different ways of modifying flashes. So many, that you may get confused about why would you choose one over another. I have two here, I have a big reflector umbrella, and I have a soft box, actually I have three, I have this umbrella also which is a shoot through umbrella, it's just like this except the flash actually shines through it.

So, why would I choose one of these over another? Umbrellas have the great advantage of being small. They pack real small, they're very easy to carry, they don't weigh very much, and they give you a round catch light in the eye which can often be very attractive if you're getting really picky about your portraiture. Soft boxes though don't pack down as small, they're often bigger even when they're collapsed they're a little bit more tricky to work with to get set up and to get mounted properly, but they offer a huge number of advantages over an umbrella.

This soft box is a great example of a nice high quality softbox, and a lot of it has to do with usability and options, but also quality of light. Because this diffusion panel here is recessed into this soft box, I know that I'm not going to have weird spill coming out, I know that my light's going to be more directed. One nice thing about a soft box is all the light comes out the front, I really know where it's going to go. The back is sealed up so I don't have to worry as much about light leaking out and bouncing off of something on a far wall and coming back into my shot.

With the umbrella, it's a little bit harder to know that the light's going to go where I want it to go. So I just get a little more control. This box has some other features, there are inserts available that allow me to add extra panels of diffusion inside or even gels inside. That's something I can't do, I cannot change the color of the light coming out of this umbrella. With a soft box, I can. I can add extra layers of diffusion to this soft box, I've got this one in front which is nice, but if I really want a softer light, I can modify that.

If I want less, I can take diffusion out. Here, I get only what comes out, diffusion options, I can only move things forward and backward. So I just have a lot more control and many more options when I'm shooting with a soft box than I am when I'm shooting with an umbrella. Does that mean I always work with a soft box? No! Because a lot of times I'm trying to travel light and I'm wanting to work quickly, and I know that I can carry this easily and get it set up easily, and for a particular type of shot that I know it's going to work well for there's no reason to hassle with a soft box.

So, in the end, when it comes down to which one you should choose, you're going to have to get both. But who doesn't like buying more gear? Still, it's important to understand the difference between the two when you're going to your camera drawer and picking one out for a particular shoot.