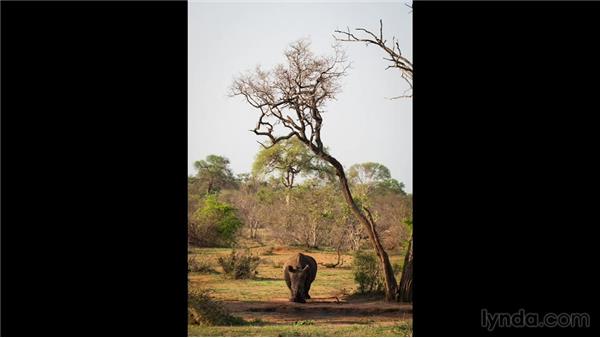 Hi, here's something you don't see everyday. This week on the Practicing Photographer, I want to talk about going on safari. Now, what you just saw was a, a bison, an American buffalo. That we saw in a wildlife preserve in Oklahoma. Now you may think, well, is that really a safari? I promise you, when there's a, a, a buffalo right outside your car going bleh, bleh, over and over, yeah you feel like you're on safari.

I've actually been on safari and its a really interesting way to shoot. It's a really fun thing to do. If you're into wildlife photography, or if you're just into animals. It's definitely something to look into. That said, you need to manage your expectations, photographically. And understand just what it is you're getting into. Now, in this situation, we probably weren't actually in any danger from the blehing buffalo. But still, we really didn't want to get out of the car. And it made shooting very interesting. I had a long lens with me, which was good. I was able to get some okay shots of this buffalo, who is standing right there.

But trying to shoot through a window is difficult. Trying to shoot when you can't really move around is difficult. And that's what you're going to expect if you go on an actual big game safari. Now when you're on an African safari, you're hoping to see the big five and honestly I can never remember what they are. There's lions and giraffes and and three other things. Anyway, it's a little bit frustrating. It's a little bit like mushroom hunting or something. You're just, you're out and you're hoping you're going to see them but you may not and obviously you don't have any control over that.

So that's another bit of managing your expectation. This happened to us actually just the other day in the wildlife preserve that we were in. We saw these buffalo. And I was really hoping to see some long horned steers because I know that they're in the same park. And just by chance, right near the end of the day, we saw a few just crossing the road. So what you're really hoping for is to get to see some behavior or to get to get those one or two good images. If you're really expecting that you're going to see one of each of the animals that are in the park, that may not be true. So you need to kind of ready yourself for possibly dissapointment.

On a big game safari, you're going to be in a safari vehicle like this one. It can hold four to six people, sometimes even more. You're going to have a driver who's driving it around and you're going to have a tracker who sits on the front. And these two people are amazing in their ability to see things. And that's what actually makes a safari worth while, is that odds are, you really are going to see something. They're usually in radio contact with other vehicles. So if someone spots a kill, they can radio other people. So you really do stand a good chance of seeing something.

I got to see lions and leopards and water buffalo and lots of other things. That said, photographically, I'm limited by what I can do from that vehicle. Now, the good news is that a pride of lions that are eating something don't actually recognize a car load of humans as meals on wheels. They just ignore it. As long as you stay in the vehicle, you're okay. Even leaning out of the vehicle can apparently cause trouble. But that means that photographically, you're limited to just what you can do from your seat.

And it was often very frustrating. I'd have almost a great shot, but there'd be a stalk of grass in the way. And if I could've just taken a step to the left, I would've been okay, but that wasn't possible. Sometimes you can say to the driver, can you back up a few feet, and they'll do that. But at other times, that's not possible, because there's a boulder a few feet behind you, or a cliff or a river or something like that, so you are somewhat limited. So, that doesn't mean you can't get great shots. I got a lot of shots that I really like when I went on safari. But you do have to really manage your expectations and know that you're in a somewhat limited shooting situation.

What do you want to take with you? You want to take a good, long lens, as we discussed before, and you can learn more about that in my specialty lenses course. You might want to look into getting a mono-pod. One thing that's nice about these safari vehicles is there's plenty of space around the seat, so you do have room to get a mono-pod going. You will often be in shade. You will be going out very early in the morning. The animals in Africa are most active at sunrise and sunset, so you tend to get up before sunrise and head out. It can be very cool in those hours, so you're going to want layers.

You might also look into getting a mount that will stabilize your camera that can fit over the edge of a car. If you Google around on this stuff, you'll find a lot of different mounts you can use for stabilizing a camera on the edge of a car. That's great for safari work, particularly if you're working with a very long lens. Obviously, you need to know your gear well enough to work very, very quickly, because situations can change incredibly fast. An animal can come through your field of view and be gone before you have a chance to take a shot. And because you're not incredibly mobile, you can't necessarily follow it around.

There are two types of safari's you can go on. The type that I'm talking about where you are in a guided safari vehicle moving off road into places that you could never get to on your own and having the support of radio contact and people who know how to really identify things. And figure out where the good sites are. The other option is to drive yourself. There are parks throughout Africa that you can drive through on paved roads. You are not allowed to get out of your car. Doesn't mean you can't get out of your car, and I'm not advocating that for a moment, but I did get out of my car.

I stood right next to the car, really ready to open the door and jump back into it. I was also like half a mile from these lions that I was shooting, and I had a very long lens. Still, I would not have wanted to have ventured farther than arm's length from my car. Working that way, again, you're limited to paved roads. You don't know where there is anything. And you're not getting the natural history information that you get from having a guided tour. Whereas there's a guy telling you this is a, one of those things and here's how they work and here's something about their culture and their, their behavior. What's also nice about those guys is boy, they can spot things that you would never see in a million years.

Now, I was out there thinking, well, this is great, and all, and I'm learning a lot, and it's very interesting, but I've gotten better pictures of, say, elephants, in the zoo. And that's true. The access you get in a, in a zoo is much nicer and you've got more mobility and you're closer. What's interesting about being on safari is, you see behavior. Yes, I can go to a zoo and see an individual elephant and get real close to it. But when I was on safari, I got to see like, an elephant family reunion. All of these elephants gathering in a watering hole and greeting each other and playing and exhibiting this elephant behavior that I would never ever get to see with elephants in captivity.

Whether the photos I got from that are any good doesn't matter so much. I really feel like I saw something really special by actually being out there in the wild. So, if you're interested in going on a safari, if you've been planning it, or if you're wanting to know more about it, I would Google around on particular game reserves. There's a difference between a private reserve where you're going to be guided, and where you're maybe going to see very particular animals, and one of the big game parks where you could do guided or drive yourself through. At that point, you're going to want to look into gear selection. Again, mounts, long lenses. If you're thinking, I don't want to spend $2,000 on a lens just to take on safari, don't forget about lens rental.

Renting a lens for a month can be a very inexpensive way of getting yourself some telephoto power for that trip. Then, of course, you're going to want to look into overall costs of things. Don't forget that you're not just going on safari. You're going a long way to get there. So you're going to want to look into padding some other things around your trip. It may not be the greatest photographic experience that you'll ever have. But it will certainly be a life-changing experience.