Shooting when the light is flat 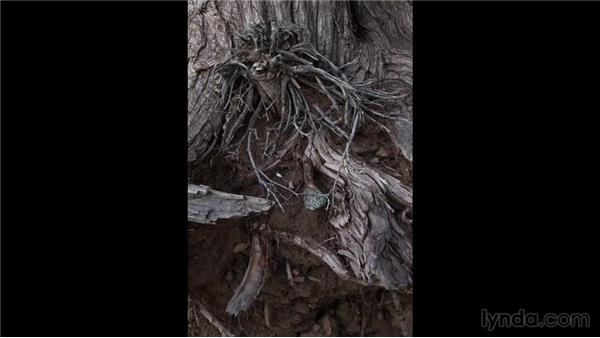 As photographers we're always on the lookout for good light. And we usually define good light as being the light of the early morning and the late afternoon. That is, light that comes in at an extreme angle. It's got a color to it and it produces lots of contrast. And I know that if you've watched many of my videos, I'm very guilty of saying, oh, you know, good light is light that's giving you shadows and texture and things like that. Does that mean that when the light goes totally flat like it is now there's nothing I can do with my camera? It's flat right now because it's twilight. But it might just as easily be flat right now because it was the middle of the day and overcast.

Do I just have to stay inside and not use my camera? No! I can come outside and look for subject matter that works very well in flat light. And I would suggest one of the first places to start looking is interesting texture. I've got these roots of this tree here, which are really wonderfully twisty. They've got texture of lots of different scales. There's a little fine texture, there's very fat texture. If this was in direct light, or, or really contrasty light, yes I would be able to shoot and it would be interesting, but I wouldn't be able to see the finer details of the texture.

The highlights would go too bright. The shadows would go too dark. Here is some examples of things that I've shot in really direct sunlight. Yes, they reveal a lot of texture. And sometimes you want a harsh light to reveal a particular type of texture. Dirt and mud and things like that. Concrete gets really texturey and crunchy. Other things get too difficult to read. So, flat light can be a really nice way of simply recording basic texture without, whoa it's actually dark enough here that my shutter speed has gone way down.

It can be a way of really seeing texture that you can't see as well with really bright light, or really contrasting light. So this is a, a nice way to work, if you feel like shooting, but you also feel like the sun isn't working in your favor. I may have waited just a little bit too long, to get these, because it's getting pretty dark out. But actually, the camera is exposing fine. I'm going to go ahead and dial down my exposure, just a little bit, because I think I've got some brightness to spare.

And that'll kick my shutter speed back up. So, I'm just working purely graphically. I'm looking for interesting folds and combinations of lines. One thing that I think is cool about this is the lake has been much higher, and I know they've been flooding around here. It's been much higher recently, and the roots are all exposed. So I get this wonderful view of the roots and the earth underneath. It's very mythological. Feel like a troll should be hiding underneath there or something. And I can get just a really true representation of the texture without exaggerated shadows and exaggerated highlights.

So, next time the light goes flat and you feel like taking pictures, consider this. And you don't have to be out in the woods to find interesting texture. City streets are full of texture that may represent itself differently in light like this than in full contrast light. Give it a try. You may find that it doesn't work, and you want to come in, come out and try again in brighter light. But next time that someone says to you, well, you can only shoot in good light, remember that good light varies depending on what it is you're trying to capture.

Video: Shooting when the light is flat