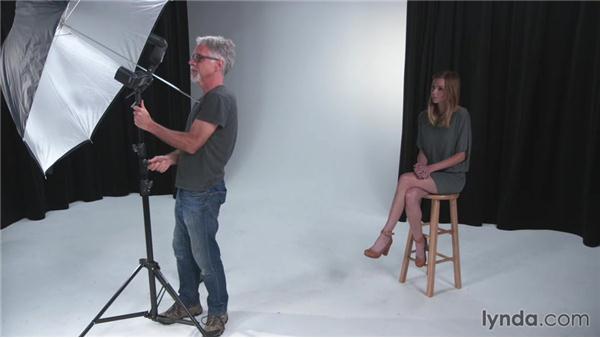 As far as setup goes, I'm just thinking of this rig as a single light. I'm doing the things I would normally do if I was setting up the flash. I've got Krissy here on a stool, I've decided to work with an umbrella, I've got my light stand, I'm going to get it in the right place. And so I'm just thinking of this as one light source, but of course it's not, It's three different light sources, and I have to figure out how to get my camera to communicate with it. And I don't really do that any way other than how I would if I was using my flashes all spread around. What I've got here are two Canon 600EX-RTs and a Yongnuo YN-560.

This an very inexpensive all-manual flash, and two Canon flashes that have built-in radio transmitters in them and I've got my radio controller here on my camera. So I'm going to have radio control to two of these flashes. The all-manual flash is being set to trigger by the optical flash of my two Canon flashes. I could actually have two of these Yongnuo ones and just a single radio one. Or if I had flashes that were controlled by infrared I could have an infrared transmitter on my camera, and as long as I had good line of sight to my flashes, everything would work.

So I'm really just doing the same communication concerns that I would have, if I was setting up multiple flashes in different locations. Depending on the way that you communicate with your flashes, you may need to be careful when you're shopping for a three-way bracket. If you need to have infrared connection between the three flashes in your rig here, then you need to be sure that you can get all the little IR windows aimed at each other and that kind of thing. That might require a different bracket than what I'm using here. There are a lot of different options for multiple-flash brackets. You can get some that let you mount two flashes, some that let you mount three, you can get rails that let you mount four or six or eight or whatever, so you have a lot of options out there.

Your main consideration is, does it rig to the stands that you have and can you get the communication needs that your particular flash system has. So, what I want to show you right now, I said already that I don't really need three flashes in terms of lighting for this situation, I can get by just fine with a single flash in here but my batteries are low, they're not recharging very quickly. So, by using multiple flashes, and yeah, I could just change the batteries rather than buying the $30 flash bracket and all that, but still, this is really cool I'm going to use multiple flashes to speed up my recycle time.

So I've got one flash turned on right now. I've got the flash in manual mode just so that I can really take control of,of how much power I'm using. Just for the sake of example here, I'm going to put this back a little bit. So I'm going to take a shot here at full power with one flash, so you can see how much light I'm getting. So, this is what I've got, it's a little hot. I might want to turn the power down a little bit or move the flash a little bit further away, but I'm not going for aesthetics right now. I just want to show you how all of this flash power balances out.

So, I'm going to turn on this second Canon flash, and I chose the Canon flash because I can control both of those from my control over, controller over here so it's very easy. And I'm going to dial my power down to half power. So now, instead of using one flash at full power, I'm using two flashes at half power, which should be the same amount of light that I was getting out of one flash at full power. So, if I look at these. Yes, this looks pretty much like the same amount of light.

The thing is my flashes will now recycle twice as quickly because I'm only burning up half the power. I can turn on a third flash and pick up even more recycle time. So, when working with a model where expressions are fleeting and changing very quickly and you want to be able to work fast, this is a really nice way of buying yourself speedier shooting, speedier flash shooting. It's a drag to have that perfect moment and fire off the shot and the flashes don't go because they're still recharging. This buys me a much faster shooting capability. And then when I go outside and work kind of against the bright ambient light that might be outside in bright sunlight, I've got right now, an extra stop and a half of flash power to play with.