Shooting tethered to a monitor 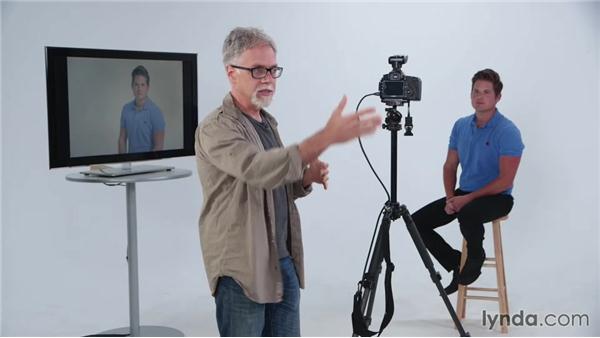 You may not think of a big flat screen TV as a photo accessory. But it turns out that your big LCD TV is actually good for something other than just I don't know, watching Gilligan's Island re-runs or whatever. I've got, my, this TV connected to my camera using an HDMI cable. Your camera probably has an HDMI port on it or a mini HDMI port which is what my 5D mark three has on it. I'm using an adapter to go from HDMI to regular HDMI.

HDMI cabling is just what you use to attach your DVD player or your Xbox or whatever to your TV. It's a very standard connection. These cables are very expensive and to be honest they are a really bad design. They, it's great they carry video and audio, but they're really fragile and, and the connection is hard to stay solid so. They're a drag to work with, but if you carry one with you, you get a lot of options when you're shooting. So, I'm here with Doug and we're just shooting some portraits and things. I would like him to be able to see what I'm doing.

Now, I could have brought a computer and a USB cable and set up a tethering situation that way, but I really don't want the computer to interfere with my set. I can have a big TV across the room and he can still see it. So I can, for example, take a shot of him. And then show him on the TV. Now, normally of course, I take a picture and it's up on image review right away. On this camera it doesn't do that. I have to actually go into playback mode and it may take it a minute but then it shows up. So now Doug can see the image we can talk about it, we can work together to build up what we need.

Or the client could be sitting across the room and able to see the image. I can even use it as a giant view finder. I'm going to go into live view mode here just as I normally would. And the live view signal gets fed out the HDMI port and I've got a live view finder over here. This is fantastic for setting lights, for adjusting, props and things like that. I use this a lot for macro and product shooting because in a lot of cases a macro setup is such a complex rig of camera and lighting gear. There's no way I can get a tethered setup in there that close.

And even if I could, I'd have trouble seeing it. So I'll just set up a big TV on the other side of the room. And then I can work while looking at the TV And it's basically in live view mode. It's like having a really giant, monitor that I'm using all the time. If you regularly go out to do corporate shooting, that kind of stuff. Carry an HDMI cable with you. It seems like every conference room I ever go in, has a big screen in it, so you can hook directly up to it and have a nice tethered situation without moving a computer and, and going that route. One thing to be aware of though, there may be times when you need to really think about whether you want the model and or the client to see what you're doing especially if what you're doing is going to need a lot of editing.

A lot of people don't understand how much can be fixed in post. If you are expecting, you know, I've got this particular edit in mind, you may not want the client to see it ahead of time because they're going to come away disappointed or they're going to start making demands and things like that. So give some thought to whether you want the model or the client to see the shoot as it's taking place. Models can become very self-conscious if they're watching it as it develops. Still, if you think the idea of a really giant remote view finder is handy, then you probably already got one in your living room. You just ned the right cable.

Video: Shooting tethered to a monitor