Shooting a successful self portrait with a phone 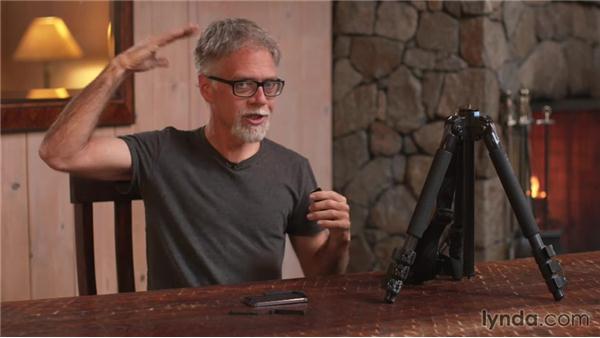 As I sit here in early 2014 I'm basking in the joy of the fact that my native tongue now officially has a new word that I can use freely and that word is selfie. The Oxford English dictionary made it an official word last year. Since then, the President of the United States has been seen shooting selfies. So, I no longer feel nerdy or insecure about shooting selfies. In fact, I'm embracing selfies and now applying actual gear to the process. Hi, my name is Ben Long.

And this week on The Practicing Photographer I just want to give you some tips, because I'm tired of seeing bad selfies out in the world. And it's time for us all to start doing a better job now that it's an official word, and since the leader of the free world is shooting them. There's not that much to a selfie. Obviously, you need to get the phone in front of you, point it back at you, and take a picture. That said, there are things you can do to get better selfies, and they are pretty much just the same things you would do if you were shooting a picture of somebody else. One of the things that strikes me about, selfies that I see that are, that are, well, that are bad is that people are just ignoring some of the most basic things of portrait photography.

You need good light, you need a good angle, and you need all the basics of good photography. A stable shot and good exposure. So good light is the first thing, and that means just looking around for nice diffuse lighting, nice even lighting. Putting yourself into a lighting position where you're taking advantage of that light and then taking a picture. How you choose to do it, whether you do it with your phone or your camera doesn't matter. As long as you can hold the camera or position the camera in such a way that it doesn't put you into some unnatural posture.

Having to do this is not going to yield a very good photo. Similarly, shooting from down here is not going to yield a very good photo. Few people look good from below. I went out yesterday with my iPhone, and shot some selfies. I was preferring to think of it as. Self portraiture, because that sounds much more serious in terms of photography goes. But really, they were just selfies. I was using an iPhone 5S, and a Glif. Which is a really cool little thing you can just snap on to the bottom of your phone. On either the long or the short axis, depending on whether you want portrait or landscape shooting.

And the you get a tripod thread. So I was, at Lake Tahoe, out on the end of a very beautiful pier. I set up my tripod. And screwed my iPhone onto it. I had already decided that I had an idea where the good light was. There was a beautiful shaft of light that had lit up across the lake. Now this may seem a little bit strange, because I was shooting with the sun at my back without a flash. So I knew that the camera was going to expose for the background and possibly leave. Me in shadow, but I liked the idea that this.

Oh wow, this is going to sound really conceited. But I really liked the idea that positioning myself in front of that shaft of light on the water, water, would kind of create this halo of light around me, so I thought I'd go for that. Secure in the knowledge that the iPhone has enough dynamic range that I would be able to brighten the shot later. It was a lot of trial and error. I had the phone mounted on a tripod and I was using a Bluetooth remote control to trigger it. So, from a technical end everything was set up very well. The problem was getting the framing. So, I had to position the shot, then go and get in the shot, take a picture.

Go back, see if the framing was okay, If it wasn't, adjust the shot, go back, take another one. I was really playing with the composition of how my body was intersecting the horizon. Really trying to think about how much do I want my body above the horizon, how much do I want it below. I was, when I was going back to review my test images, looking for the things you look for any time you're shooting a picture of somebody, was there a weird intersection of something with my head, was there a mountain growing out of my head, was I positioned properly in the shaft of light? All of those things that you would do if you were shooting somebody else, but that are very difficult to remember to do.

When you're shooting a self-portrait. I finally decided to get the camera down lower. Now, you may think, but you just told me not to shoot from down low. There's a difference between shooting down low at arm's length and shooting down low from 15 feet away. At that point I'm far enough away that what lowering the camera did was change my position in the frame. To make me fill the frame a little more, well fill the frame a little more, but also be a little more flat in terms of my perspective. I just like framing better. But mostly what I was doing was trying, again, to control my relationship to the horizon.

It took me a while but once I finally got the positioning set I was ready to start shooting. This is the hardest part because you feel ridiculous. You don't know what kind of expression to make. You don't know if you should smile, or not. You don't really know what you look like. The first thing to do at that point, is to take a very deep breath. And this is something you can tell other people when you're shooting their portraits. Taking a deep breath relaxes your face. Relaxes your posture, it puts you back into your body in a particular way that gives you a very natural look. And there's just that moment where you get through to the end of the breath that you can take that picture.

You don't want to be so self-conscious about it that you tense up at that moment, but just try breathing through some shots. Take a deep breath, let it out, take the picture. And you'll probably find you get more of a relaxed look than the scared, caught in the headlights, forced smile thing that you can get. I tried turning my body this way and that, because I had no idea what pose might look good, I had my hands in my pocket, out of my pocket. It was a very cold day. I was wearing this arctic parka. So I put the hood up to see if that made any difference. Knowing full well that it was going to darken my face. I went through all of those.

And then decided yeah, it may be dumb to shoot with the sun behind my back. Especially as I turned around and realized that there was just a beautiful soft light on my hand. So I then did the reverse angle. I didn't get the dramatic lake shot behind me. But what was on shore was really pretty, also. And it was putting this diffuse line in front of my face. The sun was shining behind some clouds. So, it was this beautiful diffusion situation. I had to map out the shot again. Figure out the composition, and then I had to go through the whole process of feeling uncomfortable shooting a bunch of self portraits of myself.

If you, now one thing that makes this a lot easier is I was shooting with an iPhone, which has got a auto focus. On the fly as I'm moving around. If you're shooting with an SLR, you have another problem which is, you don't know if the autofocus is necessarily set on you. So, make sure that your camera's set to automatically select an autofocus point. And then, when you half press using your remote control, you know, you'll come into focus then. You can, of course, also use your self-timer. The problem with a self-timer is you lack focus when you press the button and you're not in the frame.

So there's a chance you're actually focusing pretty far behind you. At that point you need to focus at a spot on the ground, reframe your shot, and then go stand at that spot. So, like any other form of photography selfies, or self portraits, whatever you want to call them, take practice. A lot of practice. One nice thing about doing them with the phone is I always have it with me. So I got a lot of chance to practice in a lot of different environments. Not just practicing the mechanical end and the technical end but practicing being comfortable on camera, being natural on camera, learning how to relax, and learning something about what my own expressions feel like.

The more you do this, the more you know wow, I can feel it. I'm making a really dumb face right now. And things can change. So, my challenge to you this week, is get out and try some self-portraiture.

Video: Shooting a successful self portrait with a phone