Shooting stills from a drone 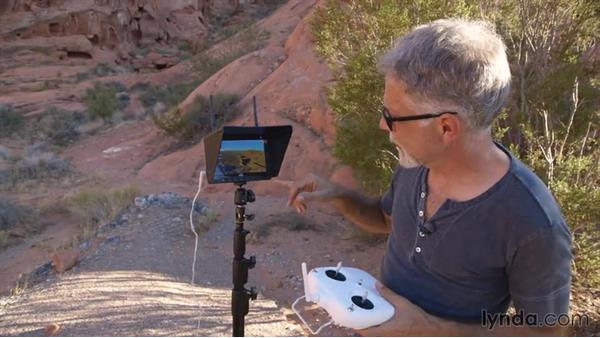 - For better or for worse, a new photographic fad is sweeping the world, I'm talking, of course, about the drone, which has brought aerial photography to, if not the masses, at least to a bunch of people who couldn't afford it before. These things are not that expensive, they're really fun to fly. I got one and I'm having a ball with it. This is the drone that I'm using, this is the Phantom 2 made by a company called DJI. Now, I chose the Phantom 2 for a few reasons. First, cost, it's actually an affordable piece of gear.

Two, it can carry a GoPro and I wanted to shoot with a GoPro because I already had one, I know how to use it, I like the image quality. Three, it has this built-in gimbal. Now, the gimbal is what keeps the camera leveled, as the copter moves around the camera stays perfectly leveled. Obviously this is great for shooting video because it means I get smooth leveled video, but even for stills it's really important because it means that the horizon is always gonna be straight, I don't have to try to figure out if I'm shooting leveled or not. I can also tilt the gimbal from the controller, so that gives me an extra bit of compositional control.

So, I've been very, very impressed with the Phantom 2. Now, DJI also makes something called the Phantom Vision which has a built-in camera, and what's cool about that camera is you can get an iPhone or an Android app that gets you full camera control as well as the Viewfinder. I tried one of those though and just decided that I really liked the quality of the GoPro better both in terms of stills and video, and I have more shooting options with the GoPro. So, this is the system that I've used, I've been very pleased with it. To shoot with it what I do is put the GoPro into Time-Lapse mode, so I've just got it clicking off every 10 seconds.

So I fly around, I frame up a shoot, I wait always 10 seconds, and I know that it will take the picture in there. And I do all of that through my iPhone, it's very easy on the iPhone to configure the GoPro. So I get all that set up before I'm ready to go, then all I have to do is turn it on and take it flying. So that's what I'm gonna try right now. Flying these things is real easy because the copter does most of the work itself, nevertheless you do have to pay attention. The first step is to just get it way up in the air, and that part happens very quickly.

(drone engine fading away) Once the thing is up you gotta make sure you don't lose track of it, so if I keep looking away it's because I'm afraid it's about to crash into a rock or something. Here on out is just normal photographic process, I'm just looking around, it's just I'm doing it with this really remote view, and, boy, it's all the normal work. Light and shadow... I'm a little frustrated by these roads in here.

This looks cool though, there's a rock formation over here casting some hard shadows, so I'm gonna try and frame up a shot around that. As much as possible, I'm going to try to get the thing in place by watching the copter because, it turns out, it's actually very easy to lose track of it in the sky, specially if it's up way high, it's real small, because you may be focusing short of it, focusing your eyes short of it or past it, and it just blurs out of your vision. I've almost lost it a couple of times, and it feels so silly when you lose it 'cause you can hear the thing you just don't know where it is.

So, I'm gonna just get this in place. Now, the screen is blacking out from time to time, well actually not from time to time, every five seconds it's blacking out 'cause that's when it's taking a picture. So, I'm liking the relationship here of this thing and this line around here, and this on the horizon, but I don't like the road. Now, honestly, I can take the road out in Photoshop-- Where is it? There it is. But I'm gonna see if I can find a framing that loses the road. So I have three things I can do here.

I can move the copter around, I can translate it side to side, and up and down, or I can pan it, or I can tilt the GoPro. And it may be that there's no way to get rid of the road. I'm gonna try going down and forward. And so this can take a while, it can just take a little bit of time to get it into place, and as with any composition you may find that the framing you want is not actually possible.

Ah-ha! Now we're getting somewhere. I've lost the road in those little buildings. So, this is actually my first time flying this thing out in a landscape situation, I've been using it mostly for urban and architectural stuff. It's really fun to get right above a building like this and get angles that you don't normally see, or architectural details that you can't normally see. Out here this is great, there's so much abstract geometry to work with. And so much of it is very difficult to pre-visualize or imagine without just getting the copter in the air.

So, I've find working in urban situation and a little bit of landscape stuff that I've done, it's really just a process of flying around looking and you might spend half an hour flying the thing around and not really find a decent composition. Come back the next day in the same area-- Ah, this one is where actually maybe I like the road And see something that you didn't get to see the day before. So, it takes a lot of time. I find this a little like macro photography. In macro shooting you can look at the thing and go, "Well, maybe that's an interesting macro shot", but it's not until you get the camera in real close that you realize there's a whole landscape there that you couldn't pre-visualize.

Shooting with a drone is very much the same way, you just gotta put it up and see what you see once you've got that aerial vantage point. The GoPro has a lot of geometric distortion, it's got a real barrel distortion. You can see here in this image the horizon is really bowed. So a lot of times when-- I feel very rude looking up in the sky all the time but really I'm afraid I'm about to lose my drone. A lot of times I will pad the composition with extra space around it because I know that I can correct this distortion in Photoshop, but when I do that, when I flatten the image out, it is going to result in a crop.

So, you kind of wanna bracket your framing in a way, shoot the shot framed up exactly the way that you want it, but then pull back a little bit, go a little bit wider, and build-in an extra little padding so that you've got room to do that geometric distortion. Because, again, the GoPro is a very almost fish-eye lens. I'm gonna bring it back in 'cause I'm getting a little worried about battery. (drone engine) While I was shooting you saw me using this little monitor over here, is the Viewfinder.

Next week I'm going to go into how that works. That's an add-on to the Phantom, it's something called an FPV system, or First Person View. In the meantime, if you'd like to know anything else about shooting with the GoPro and shooting with a drone, check out Paul Taggart's course on GoPro shooting. He's got a lot of great tips and you get to see a lot of really cool pictures.

Video: Shooting stills from a drone