Shooting a portrait with flash as the key light 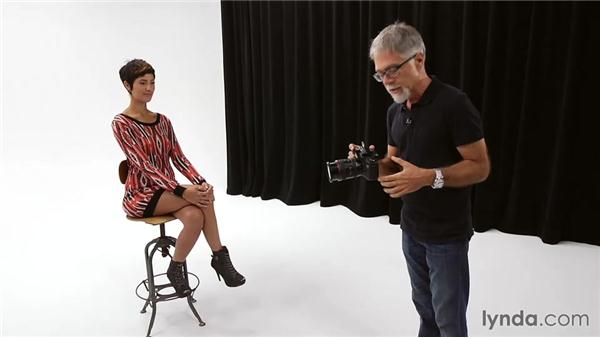 I've been trying to get you to think of lighting in terms of key and fill and for the entire last chapter, we've been using our flash as a fill light. There has been a key light of some kind in the scene, the sun, actually I think in every case it was the sun, some kind of bright light that has been illuminating our subject, and we've been using our flash to fill in extra shadows. There will be times, though, where you don't really have a good strong key light, and this is one of those times. >> Hm >> I'm working here with Ashley, and she's sitting here and she looks great except that we don't really have a key light anywhere.

The light in this room is just an even fill that's wrapping all the around her. Sometimes, that's a very good potrait light. If it's wrapping around and eliminating shadows, that's great. In her case, it's just not quite bright enough; she's a little bit in shadow. That's partly becasue there is a light more light behind her than there is in front. She is evenly lit all the way all the way around her face but it's just a little blah somehow. I'm not getting much contour off of her face, much modeling; she needs a key light. Now I could try and work to change the ambient lighting, but lot of times you don't have that option.

And there is really no need because I do have a flash source. I have a popup flash on my camera. So I'm going to try using this as a key light. Now for the sake of this example, and the next few examples, we're not going to do anything fancy with her pose. She's just going to look at the camera, because we want to really isolate the different lighting things that we're working with here so that you can see how the light changes with the various things that we're going to do. We're on our, our beautiful light cyclorama here. What's great about it, is because of this sweep in the floor, it's a total limbo background.

So I don't have any sense depth, anything; it really isolates her, and that looks great. And you may think, yeah, I don't have one of those in my garage, what do I do? It's very easy to get a nice white background like this. You can just get paper and tape it to the wall. You'll also find, though, that there are very inexpensive, $100, $150 portrait cyclorama setups that you can get; it's usually just a piece of cloth and a frame to hang it on. All you need's a good sized room, and you can have a setup like this, maybe not quite this big, but still a nice portrait environment. So I've got my popup flash set. I'm just going to go the easy way.

I'm in Program mode, I'm going to let the camera take care of everything. My popup flash is using TTL, so it's going to figure out a good flash exposure. Now, the rest of this I'm, I'm hoping you're already familiar with. I'm shooting a portrat, so I want to think a little bit about focal length and camera position. If I go really wide and get in very close, I'm going to be exaggerating her features in a way that may not be particularly flattering; it's going to make her nose look larger. So I'm going to go to a slightly telephoto focal length. I'm going to go to somewhere between 60 and 80 millimeters equivalent, just to get this first shot, half pressing to Auto Focus Here's my shot with my key light.

It doesn't really look that much like a key light though, does it? It's she's brighter, that's something. What's, what's going on here? Why, why does this just look like a flash picture? Its mostly because of the position of the flash. Because it's sitting right here on top of the camera, I'm blasting a whole bunch of light exactly forward, right into her face. That is rarely how we ever see light on somebody; light is usually overhead. It's usually overhead, coming from over our shoulder. Because this is right in her face, it is highlighting her in ways that we're not used to.

It's also a lot of light intensity; she's ending up kind of shiny. There's some things I can do about that of course. I can take my flash exposure compensation and dial down. I'm going to take it down two-thirds of a stop, and grab another shot here. Okay, she's not so shiny now, but really all I've got is a brighter version of the problem that I had before, she's still just kind of flat. She looks great, but Ashley has these really nice cheekbones, and I'm not seeing them, and that's because the just straight forward flash is eliminating all shadows that might reveal any contour in her face.

This is just a lousy position right now for a key light, and most of the time, that's going to be true. In general, the pop-up flash on your camera is a fill light, that's what it's for, that's what it's best used for. In a pinch, you can use it as a key light, sometimes it might make a great key light, but for most situation, you're going to find that it's just not quite right. So, let's take a look at an external flash and see if it makes a better key light.

Fortunately, it isn't difficult to get great results from flash, and in this course, photographer, author, and teacher Ben Long details the concepts and techniques behind effective lighting with flash. Ben starts with fundamentals that build on exposure principles taught in other installments of Foundations of Photography—simple techniques that improve the results from a camera's built-in flash. He then focuses on fill flash techniques and on using flash as a key light. The course also explores topics ranging from bouncing and syncing flash to shooting with one or more off-camera flash units.
Topics include:

Video: Shooting a portrait with flash as the key light