Shooting macro shots on an iPhone 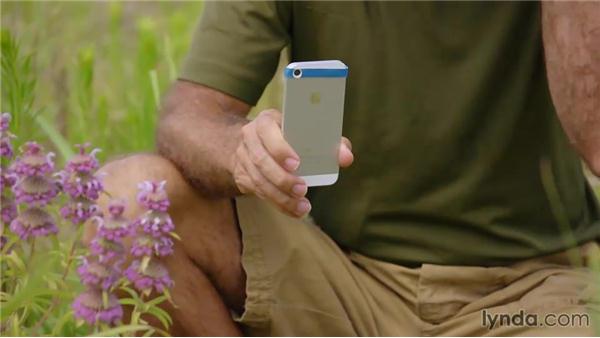 Join Ben Long for an in-depth discussion in this video Shooting macro shots on an iPhone, part of The Practicing Photographer.

One of the biggest changes in digital photography technology over the last few years has been the advancement of cell phone cameras. Honestly when cell phone cameras came out I thought you know that's kind of a fun little novelty. I didn't ever actually expect they would get this good this quickly. I have an iPhone 5 here and I'm continually amazed at the really nice 8 by 10 inch prints that I can get from it. Nevertheless the focal length range, the overall design of the camera is It's for snap shots, and you can get very nice snapshots. Of course you can take good pictures also, but that's really the sweet spot that they're aiming for.

There are, of course, a lot of types of photography besides snapshot shooting. For example I'm standing here in front of these very pretty purple flowers and I'd like to get some macro shots of them. Now, just working with the camera as is, I can't actually get that close. Because, like any camera, the cell phone camera has a minimum focusing distance. That is, you can only get so close, and still maintain focus. I can get to about here, which is actually pretty good. I can almost fill the frame with the thing.

but I can't get in super tight as I would with a real macro photograph. If you want macro capability on your cell phone, not just an iPhone but but a whole lot of phones. iPhone's and Android phones, you might want to consider one of these. This is a cell lens, very clever little device. It's a tiny little optical element here, stuck into the middle of a rubber band. So what I can do is put the optical element over the lens on my phone, and just strap it in place with this rubber band. And now, I have a phone equipped with a macro lens.

It's really all there is to it. I don't need to install any software. I don't need to do anything. That I wouldn't normally do to take a picture. I'm just going to fire up my camera application, and now my minimum focusing distance has gone very very small. Meaning I can get in real tight here. Now like with any macro lens, my depth of field is extremely shallow. And that can make focusing difficult, especially on a windy day like this when the flower that I'm trying to shoot is really moving around.

So, I'm going to just go in here, an try to stabilize the flower with my hand, hopefully keeping my hand out a the shot. Great thing about the shallow depth of field, is that the bits of finger that you might be able to see Are going to be blurred out and a little indistinct. If you're an iPhone user, remember you can use either of the volume controls as a shutter release. So you don't have to try to be hitting that button on the front of the phone. Oh, there's a bee. If he would land there, that would be really cool, but he's not going to do that. Oh, there he is. So, I've been very impressed with this thing.

It's really shallow depth of field, but it does produce. just like a normal macro lens. It produ, it's a little hard to work with. But it produces very, very sharp images. And you can't go wrong with the form factor. It's tiny, it's easy to carry, it slips on and off very simply. As for concerns for shooting, it is going the things all the problems that you would have with a normal macro lens. Trying to achieve focus. You are probably going to shoot a lot of trial and error. Don't expect to go in and nail the shot in the first time. Shoot a lot of coverage. Especially in bright sunlight where it is difficult to tell if the image is in focus.

So it's a cheap, easy way to get cell phone ca macro capability with you all the time.