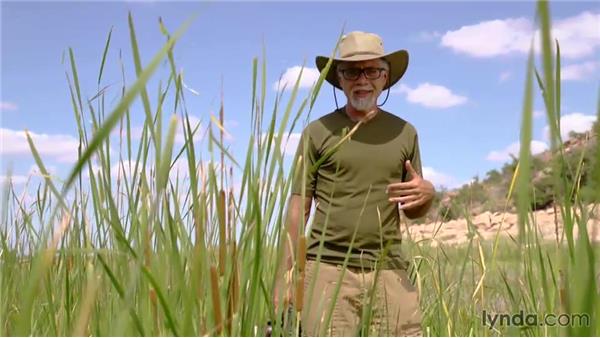 Not a lot of people know this, but Oklahoma has really great sounding bugs. That may sound strange but there's just, you here all these really weird noises while we're here. and I want to shoot some of them. So this week on Practicing Photographer, I wanta talk a little bit about shooting macro-photos of bugs. And you know there's never a bug around when you need one. The hotel room's full of them, it seems like. They're, they're always biting me and things like that. But now that I'm out, looking for them I'm not finding any of them.

And if you've tried any macro bug, photography, that may be what you've found also. I did not, come here, expecting, to shoot macro. So I didn't bring a macro lens. I did though, bring my, macro lens reversal ring. So, what I've got here, is my normal 24 to 105 millimeter lens flipped around backwards, which turns it into a very capable macro lens. If this is all news to you, if it's a complete mystery that you can do this, check out my Lens-Reversal Macro course. It explains this whole thing that I'm doing.

And I've set up my camera right now with my lens reversed at f16, trying to get as much depth of field as possible. So my hope has been to find some bugs. I can hear them all around me. As I take a step, I'm kind of aware of them jumping away from me, but as I'm stopping and looking around, I'm, I'm not finding any. So, if you've gone out macro shooting, you may have encountered this same thing. Although there's a bee on this flower right now. so I wanted to just talk a little bit about that. You go online and you see these, beautiful macro bug pictures. How do people get them? Do they have special equipment and or special techniques or anything like that? Certainly.

a really nice macro lens can be a great advantage. Although lens reversal ring, is a very effective way, of shooting macro shots. The biggest thing that people who get those great, macro bug shots have is patience. Just extreme, extreme patience. and a lot of time on their hands. It is hard oh, he's back, and he's covered with pollen. It is hard finding bugs to shoot. Now, there are some things you can do to improve your chances of finding some. I'm out here at about three in the afternoon.

It's pretty much the hottest part of the day and a lot of the bugs just left. The went to, I don't know, somewhere air conditioned. And so, they're just not around. A lot of the bugs go dormant during the hot part of the day. The best time to find bugs in the summer time is going to be in the early morning and late evening. A lot of them come out to hunt or to feed, It's cooler, so they're a little more active. So if you really want to do some bug shooting, you should try getting up very early in the morning. Some bugs, particularly in the spring and fall, will really slow down in the colder parts of the day. Bees, especially, you have an easier time shooting.

If you get out when it's still cool. of course the other problem with bugs is they move all the time. Just when you get your shot ready, they take off and leave. There's no trick to that. You've got to learn to work quickly and you've got to have a whole lot of patience. The other problem is simply finding them, particularly if you're interested in spiders. There are, spiders will hide under bits of grass and things like that. You've really, it's like hunting mushrooms. You've just got to really stay focused on the ground and wait. Til you see something. Very often you might see a spider but it's not actually in a good configuration for shooting. It's underneath something, things like that.

Lay down on the ground. Line up your shot and wait. You may be laying there for 15 minutes before it actually moves into some position where you can get a good shot of it. If you've been doing that and going. Wow, this is tedious and boring and really difficult, there's got to be a better way. If you want to shoot a bug in it's natural environment, that's just what you gotta do, you're not doing anything wrong. You might also give up on the idea of going out to shoot a very particular kind of insect. it might be that you've gotta just shoot what you can find. As I'm walking around here, in fact even just as I.

I move grass around, grasshoppers are taking off in all directions. And the grasshoppers seem to be a little bit slower moving than some of the other things that are out here. So I switched to shooting grasshoppers. I really wanted to find some cool spiders because this place is filthy with all sorts of different spiders. But Grasshoppers were all I could find while I was out so I've been changing my focus to those. Oh, here's a butterfly. Butterflies are also going to be moving much slower in the morning as they try to dry out their wings and things like that. So if you are curious about macro bug shooting, but you've never tried it and you don't have a macro lens.

First get yourself a lens reversal ring, it's only 10 or 15 bucks. You'll need to find the right one for your lens, that's all explained my lens reversal class. But then be ready. It's going to be a lot of time. You're going to have to go out and spend a lot of time laying in the mud, just looking around. You're going to be frustrated by bugs flying off just before you take your shot. Remember, you can't focus when you're working with lens reversal. You're moving in and out, so it can take a while to. Get the shot lined up, the bug's probably not going to cooperate. If you're having that frustration, you're not doing anything wrong. It just takes a lot of time and patience to get those really cool macro insect shots.