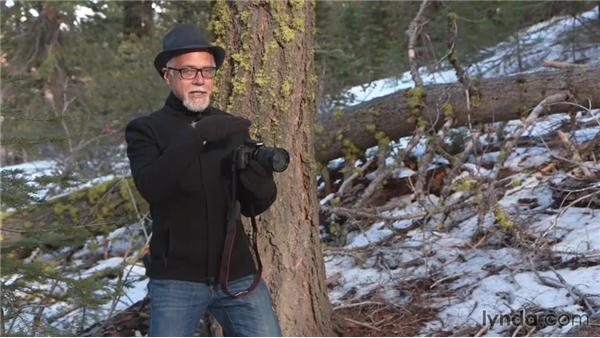 Join Ben Long for an in-depth discussion in this video Shooting level, part of The Practicing Photographer.

I was teaching a basic photography workshop one time with a friend and he joked at the beginning of the workshop. well, we just want everyone to come out of here shooting images that are in focus and level. And at the time, I thought, yes, yes, yes. We're going to set a much higher bar than that. But I was thinking about that moment last night as I was reviewing some images and realized, I'd shot a bunch of crooked images. Shooting straight is not always that easy. You think, oh, you just pay attention to it and your images will be okay. No, sometimes you can end up in a position where you might actually be paying attention to level, but you're actually incapable of judging what is a level shot.

So, I just want to point out two situations that you need to be careful of that can lead you to be a little bit challenged in your ability to shoot level. The first is, if you are framing up a shot and you realize that you want the camera a little bit lower. Now, sometimes we'll go about doing that by rather than lowering our bodies, we'll lower the camera. So maybe I frame this way, and I go no, I need it, I need it more like here. So I'll put the camera down here. And then I'll go like this. Now. The world does not look level like this.

It's impossible for me to judge whether I had the image straight. It also hurts. So if I need to lower the camera, I need to lower my whole body. I need to bend at the knees and come down here. I need to make sure that I am squared to the back of the camera and that my head is level relative to the ground. So, in addition to getting a level shot I'm going to get a quad workout so I like to think of this as my ability to shoot level and do some squats at the same time. Now another instance that could challenge my ability to perceive correct level is I'm walking along and I go, look at that thing over there, I'm going to take a picture of that and I do this.

And this isn't as bad, but it's very easy as I go from here to here. I don't know if you can really tell but, my camera is off axis like that much. This rotation bit comes with kind of a swoop. And so that can throw me out of whack. Now. If I'm just in a hurry and there's a fleeting moment going by maybe that's all I can do. But rather than twisting at the waist, it's better to turn and stay square to my shot. So posture really is critical if you want to ensure that you have a level shot.

And the two easiest, or the two situations that are most likely to throw your posture out of whack in terms of level are going down and turning to the left. So just be sure that you are always keeping your body square to your subject. That you got your elbows at your side for good stability. That you've got the camera all the way to your face, not the camera here and your face out here. All of those things that allow you to keep this whole configuration level. If you are doing that then your shot is probably going to be level