Shooting a demo (putting it all together) 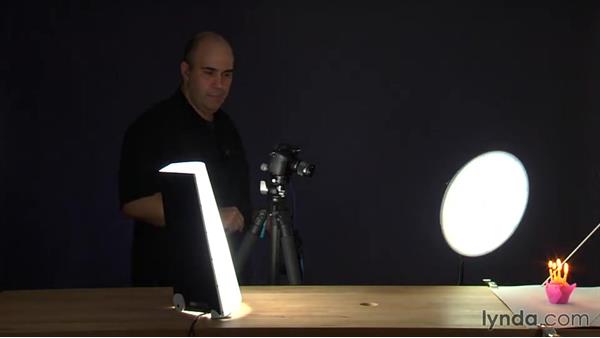 - Alright, now that we understand some of the concepts of shooting, let's do a quick demonstration to put all these things together. I've built a small environment here where we're gonna be shooting, of all things, a cupcake. But not a static cupcake, a cupcake with candles lit on fire. This will give us subtle motion. Alright, let's take a look at the scene from right to left. We've lit the scene here. On this side, I have used a Lowell Eagle Light. This is a very soft, compact fluorescent light. Got a nice broad, soft surface here.

And this is gonna give me constant lighting for my subject. I'm also filling things in a little bit, using this LED light here from Flashpoint which has a soft diffuser. I'm going for soft lighting because I want to make sure that the candlelight really stands out. And this is gonna give me the look that I want. Now, I may find that I do a few different takes and adjust the overall intensity of these lights, but we'll start with things a little bit higher lit for this initial take. Now, at the end of the table here, we've built a small cyclorama, or a cyc.

This is a cloud chamber type device, and it's just a simple thing you can pick up online or make one yourself, but it's a curved piece of plastic that has a little bit of modal texture. This is just gonna give us a nice surface that avoids having too many heavy shadows. Now, right now I have a small shadow going from behind the subject, but that's just to give it a sense of perspective and space. The rest of it looks pretty much infinite, and it just falls off into the background due to the curved surface. On the camera itself, you'll note, absolutely stable here.

I've got it on a tripod, making sure that it's a heavy-duty, beefy tripod so there's no unwanted movements. I've tightened down all of the legs so it's not gonna be prone to move, and I make sure that my ball head is locked on the shot. In this case, I'm using a macro lens, but I'm using the longer shooting distance on it. You can use really any type of lens just make sure everything stays in focus. Alright, I'm gonna tap the screen to focus, and get that basically set.

Sounds pretty good. And let's get the camera rolling. Now, I'm rolling on 4K video which is gonna give me plenty of extra resolution for this cinemagraph. On this side here, I'll just get things lit. And I'll carefully do that and then step away from the scene. Now we'll just let things settle, and shoot several seconds of that.

Go to a smaller aperture. Pushing the background a little bit more grayish. And make sure to lay down at least 20 seconds of a shot. And let's just open that iris back up a little bit. Letting the background blow out a little. But still trying to preserve some detail in the candle flames.

Tweak my lighting a little bit. There we go, a little more directional. Check my focus by tapping the screen. Got it. And since I increased the light, take the aperture down a little bit. Alright, that's reading pretty well.

You'll notice that I'm minimizing my movement as well while shooting. I don't want to transfer any vibration to the set that will equate into extra movement or shake in the camera. Make sure you have a stable platform, and you minimize any extra movement on set or of your subject. Alright, and now I'm just going to blow the candles out as part of the take. Since I'm moving over, I'm going to be careful to make sure that I let everything settle.

I'd like a good solid 20 seconds here, so I'll count to 20 before I blow the candles out. This way any vibration or movement is minimized. Alright, so the candles are blown out. I'll stop the record here. And I've got my take. Now this is just one simple type of cinemagraphs. We're gonna look at lots of other types of shooting scenarios as I share footage with you throughout the rest of our exercises.

And I'll try to explain the logic of how I composed the shot and executed them. But as you see here, the real takeaway is make sure you have a stable platform. Think about minimal or subtle movement, and decide what you want to have happen in the scene. Alright, we're gonna get things cleaned up, get this gear cleared off, make room for the computer, and start to share some software techniques, and we'll probably fight over who gets to eat the cupcake.

2/24/2015
Learn how to use Photoshop, After Effects, and two dedicated tools—Flixel and Cliplets—to explore the creative possibilities of cinemagraphs: static photos that contain areas of motion. Rich Harrington explores assembly techniques in each program and illustrates effective shooting and post-production techniques to improve the end results. The final cinemagraphs can be used in websites, banner ads, emails, presentations, or even digital signage.
Topics include:

Video: Shooting a demo (putting it all together)