Setting up a macro time lapse of a flower 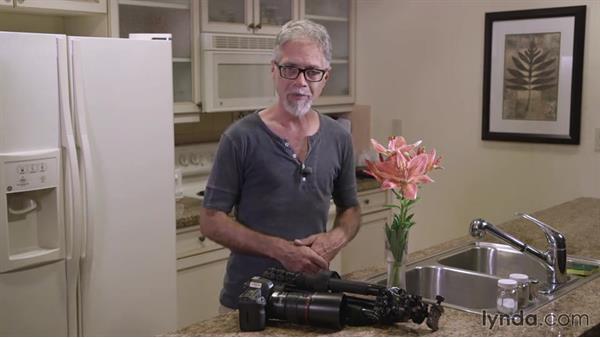 - If you've spent much time lately looking at any kind of photo sharing, social media kind of site, you've probably seen some time-lapses of flowers, and with good reason. Time-lapse flower movies are fun and easy to make, and they're fascinating to watch. They afford us a view of the world, and of nature that no-one had 100 years ago. No-one got to see exactly what happens when something like this opens up. They give us the option to really control our view of time. It's a fascinating thing to watch. It's also pretty easy to do.

These are some lilies, and I shot a time-lapse of one last night using no more gear than a tripod, my camera, a macro lens, and an intervalometer, and even some of that stuff is optional. This is something you can really start to experiment with on your own with very little investment in anything other than some flowers, and maybe one or two extra pieces of gear. As you get more interested and want to get more advanced, you got plenty of room to grow, and a lot of different things you can try. First thing is the flowers themselves. You need some flowers, and your refrigerator may not have flowers in them.

But there's probably a refrigerator at your local grocery store that does. I've been keeping these in there because it makes them last longer. And a lot of times, depending on when you buy the flowers and how long you have before you want to start shooting, you may need to keep them refrigerated so that they don't open. Obviously, what you're looking for when you buy are flowers that are still closed. It's a good idea to start with flowers that are somewhat predictable in the way they open. Lilies tend to be more predictable than roses in terms of how quickly they will open, and whether they will open all the way.

So, this is a good choice for getting started. Gear-wise, I have an SLR. In this case, I'm using a 100mm macro lens, and that was because, to get the framing that I wanted, I really needed that macro power. You don't have to have a macro lens though, and I don't always use the macro lens, because sometimes I want to be farther back, I want a wider frame. And I don't want to run into the depth-of-field issues that I have when I get to macro distances. If you don't know about macro shooting, or you don't understand why macro involves depth-of-field concerns, take a look at my macro and lens reversal classes, they'll explain a lot of that for you.

A tripod, obviously, to get the camera set up, and an intervalometer. An intervalometer is simply what controls the camera and causes it to fire at regular intervals for a certain amount of time. Some cameras have an intervalometer built-in, others, it's a remote control that you plug in. You can get them very inexpensively, and they will give you the options of saying how often you want to take a picture, and for most flower time-lapses, that's about once every three minutes. You can specify a certain number of frames that you want shot, or you can just leave them running.

Frame up your shot, is the next thing. Getting your tripod in place. You also want to think about where you're putting the flower. What do you want in the background? I've got a kitchen sink here, that's probably not the best idea. I built a time-lapse out of this last night by sitting it on the top of the toilet in the bathroom, and putting a black backdrop behind it. The reason I chose that room is because it can be closed off completely so that I can completely control the light. I was very fortunate that the light in this bathroom was a nice light for these flowers, and it was also constant. I knew that I could just turn it on, leave it all night long, and everything would be okay.

I also knew that there were no air conditioning vents, or things that would cause a draft, that would cause the flowers to move. I really want them to be still. Depending on how many flowers you have and how tightly then fit in your vase, you might actually need to do something to stabilize the stems too. You might need to poke paper towels around them, or tie them down with thread or something like that. As the bud opens, it could change the weight on the flower, so that it starts to fall. That could just take practice and observation. Buying a bunch of the same flowers so you can see over time how they open, can be a big help.

Framing up the shot is pretty simple. You just look for a good composition. But, you do need to understand what the flower's gonna do when it opens. Does it turn this direction? Does it turn that direction? You want to try and get an idea for how wide it's gonna be when it opens, and plan your composition accordingly. Do you want to see the whole open thing, or are you really gonna focus on just a part of it? Once your shot is all set up, you're ready to just let it rip and leave it alone. That's a process of turning on the intervalometer and then letting it sit. At three minutes, this took ten hours to get this movie.

I want a deeper depth-of-field, so I went to a smaller aperture, f/9.0. I was just in manual mode to be sure that the exposure would be consistent from frame-to-frame, so that my depth-of-field wouldn't change. Shutter ended up being around one second at ISO 320. Depending on your camera, you may go, "Well, I don't want to run the risk of softening "so I'll go to a higher ISO." You might be able to do that without suffering a noise penalty. You also want to stay out of auto white balance, because as things move around, you don't want color shifts, so going to a white balance preset or a manual white balance will go a long way to ensure that you don't have weird color things happening.

Finally, you don't want your camera to die and you don't want it wrecking the light in your scene with its image review. So, turn the image review off so you don't have other light coming into the room, and be sure that you've got a fully-charged battery. If you have a battery grip that allow multiple batteries, that can buy you some more time. Alternately, you may have an AC adapter that you can plug into your camera, and that will get you an indefinite amount of time. If storage is an issue for you, you could also consider tethering to a computer. That gets more complicated, and you probably want the computer out of the room so that its monitor isn't messing things up.

But for something like a ten-hour shot, even JPEG or RAW, at three minutes, you're not talking a huge number of frames, so you ought to be able to fit those onto a reasonable-sized card. Again, this is something you can do without a whole lot of extra gear, and you can get results like this that are fascinating to look at. From here, you can move up to more complicated flowers, flowers that take longer to open. You might want to go to more controlled lighting, starting to get more creative with your lighting. You can do that either with continuous lights or strobes. But it's best to start practicing just with a basic setup like this.

There's a lot to learn about how flowers open and how to set this kind of stuff up.

Video: Setting up a macro time lapse of a flower