Setting up an HDR time lapse 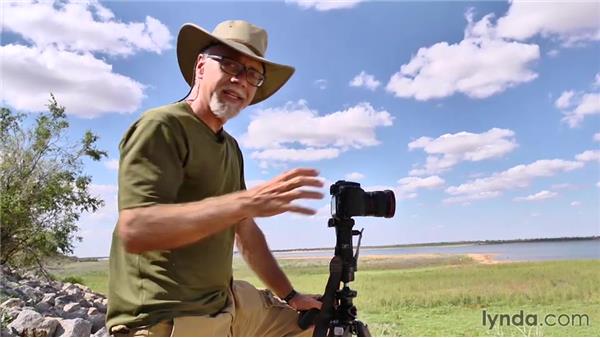 Standing out here, right now, and I've got these really great, big, poofy, pooficus nimbus clouds, or something up here that are really beautiful, and one thing that can really work well for shooting pictures of clouds. Is to attack them with an HDR scenario. You'll get a whole lot of really fine kind of filigree texture around the end. But another thing about clouds is, they move, particularly here in Oklahoma, where the wind comes sweeping down the plains. And a great way to handle moving objects is to shoot a time lapse, so that you can see the clouds.

Billow across the sky. This week on The Practicing Photographer, we're going to look at how to combine those two things. We're going to shoot an HDR time lapse, so that we can see the movement of the clouds. But with HDR, we're going to get a whole bunch of extra detail in them. Now, for this to work, you need a few things. First of all, for, or for an HDR time lapse to work, you need a few things. First of all, you need an HDR scene. You need a high dynamic range. Scene. This scene is not super high dynamic range but because clouds respond to HDR treatment in in such a nice way, I am going to, I do think this is worth doing HDR on.

Second thing is you need, all the stuff you need to, to do time lapse. That is a tripod and an intervalometer. An intervalometer. Let's you shoot intervals. It will take control of the camera and shoot a shot at regular intervals. Our thing is we need three shots at regular intervals, and those shots need to be bracketed. Now. It helps if you're going to watch the rest of this if you have some familiarity with HDR, high dynamic range imaging. And I've got a whole course on that that you can check out that'll walk you through all of the normal HDR imaging process.

Our goal is to frame up a shot, get our camera configured, get our intervalometer configured, and then let it sit here and just shoot away for a couple of hours. When it's done, we will take that resulting mass of images, and process them into a bunch of HDR images. We will then take those, and put them into some software that will let us output an actual movie that we can watch. So I've framed up a shot here that I like, and I'm just doing kind of just normal composition stuff, finding a. Way of representing clouds and the landscape in a nice way. What I need to do now is get the camera configured.

So, I'm just going to do my normal HDR configuration. Which is I'm going, for this type of shot at least. I'm going into aperture priority. I want to be sure that depth of field stays the same throughout my entire HDR bracket. So I'm going to dial in an aperture of F8. This is not a full frame camera. This is a crop sensor camera. So at F8 I know that. I'm not going to start seeing a softening of the image due to diffraction artifacts. I'm going to put my ISO down a little bit.

I'm not planning on letting this go into very low light, so I'm going to knock it back down to 100 because the HDR merging process can be a little bit unforgiving of noise, so I want to be sure that I have no noise. I need Auto-Bracketing turned on. So I'm going to drop in here to the Bracketing controls and create a three step auto-bracket with the bracket set to one-stop apart. So it's going to, a bracketed set will be a shot at normal exposure, a shot one stop under, and one shot.

One stop over. So I've got that dialed in. That didn't take, hang on. The thing about these Cannon cameras is that if you don't hit the set button, it doesn't actually store your setting. So, I'm at F11, ISO 100. I've got my three step auto-bracketing turned on. The last thing I need is Drive mode, or Burst mode. This camera has two different Drive modes, a regular one, which shoots at about five frames per second. And a slower one which shoots at about three frames per second. I want that slow one. I want three frames per second because of the way my intervalometer works.

We'll get back to that in a second. So do I have everything? I've got my metering set to Matrix metering. ISO 100, my, my drive mode is on at the right speed. I'm at F8 and I've got bracketing turned on. The reason I want to be real careful about this. Is I don't want to spend two hours shooting up all this stuff. Only to find out that I forgot to turn off, Black and White mode, or something. Oh, actually, that's a thing. What format do I want to shoot in? Right now. I am, set for shooting in raw, because that's where I would normally shoot.

Actually. A larger frame size then I need since ultimately I'm going to video. I'm going to stick with that that full size because it gives me room to crop if I want to later, it gives me the opportunity to run a video editing program to push in on the on the video, so I'm just going to go ahead and stay with that, got a nice big card in here. Now this is a third party intervalometer. This is not the Cannon intervalometer. You can find these, they're great. This takes two triple A batteries. They've got all the functionality you need. You can get them for 25, 30 bucks from B&H, Adorama, Amazon.

The features I'm looking for are the ability to set how long the Shutter button is held down. I want it held down for one second, because at this drive speed, holding the shutter button down for one second takes three pictures, and I'm configured for a three-step bracket. So I'm just going to go in here and set the length to one second. And as you can see, I can actually set this to hold it down for hours. So if I was doing some astro-photography or something, this would be a way to do that. So, I'm set there. Now, I'm ready to move on to my interval. And I'm going to have this go boy these clouds aren't actually moving that fast so, maybe I can get away with slightly longer interval to get a little motion.

So, I'm going to say, every ten seconds. So I'm just dialing that up to 10. Finally I can tell it how many to do. If I wanted to shoot a very particular length movie. I could do the calculation of three frames every ten seconds, I want to end up with 20 seconds of finished video. At 24 frames per second, would end up being X number of shots. I'm just going to leave it set, basically on infinity. It's just going to go until I tell it to stop. And I think that's everything. I often don't figure that out until I've actually started the process and hear that something's going wrong.

I'm going to go ahead and start this up now. My shot is still set, my tripod is locked down, the camera is stabilized, if it was much windier I might want to take this strap off because that could be jostling the camera around, and, I'm just going to tell it to start and it should right away, fire a burst. Three shots there. It's now going to count down for ten seconds. And then it should fire another three. If it fires four or two, I'm in trouble, because, there were three, because then my auto-bracketing is out of whack. Then I'm getting two frames of one set, and then ten seconds later, getting the third one of another set and the first two of another.

So you've really gotta be sure that your timing works. Not all cameras will do this. We actually set up earlier with a 5D mark two, and it's drive speed is four frames per second, so I couldn't actually do it with this intervalometer. At that point, you're going to want an intervalometer that gives you a little more control. Or, what you might want to do Is tether it to a computer and use, in this case, Cannon's remote control software to set up the whole process because that gives you a little more power. But as far as a very easily portable, inexpensive, easy way to to HDR time lapse, an intervalometer like this works really well.

So. Now it's time to go relax and eat dinner and cool my heels while this nice little intervalometer robot does all my work for me. I'm going to end up with a whole bunch of images that I'm going to need to process, and in the next movie, we're going to take a look at how to do that.