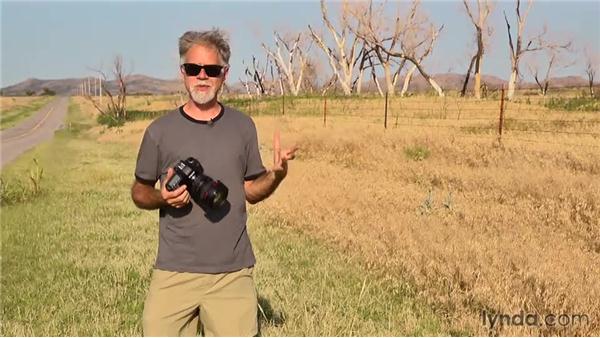 So we're just driving down this little two lane country road out in the middle of nowhere in Oklahoma. And it's very pretty out here but nothing's really been catching my eyes. We've been driving down some, by some stands of trees and things like that, but I didn't see any reason to want to stop. We come up over this hill though, and I look off to my right and I see this. This stand of trees, just immediately caught my eye. It's been burned, or the bark has been stripped off, or some combination of both. And what I was immediately struck by was, wow there's a whole bunch of really bright white and a whole bunch of really dark black.

So I've got really extreme contrast which means just tonality. So we pulled over and made our way through the barbed wire and I started shooting. Now the reason that stark black an white caught my eye was I, I immediately started thinking. If I'm shooting with an eye toward black and white, I'm going to have all of this contrast to play with. And contrast can be a very good way of guiding the viewers eye. I really like shooting trees because they're strong lines. And these really dark blacks and white whites combine with all these lines would probably make for a lot of interesting compositional options.

So I prowled around. It turns out these are two mostly empty watering holes, probably for cattle. And, there must have been a fire here at some point because the trees are charred. I actually got soot on me from climbing around on them, but the, the ground is still all wet from when there was water here. And, I'm just working the basic, doing the basic work of composition. I'm trying to find lines that are interesting, I'm trying to make sure that the lines that I'm composing or guiding the viewer's eye somewhere.

I'm trying to make sure there's an obvious subject and obvious background, but then I've also got this stark black and white to play with. Now, while I'm out here, it's actually a, a really nice location. It's very hot out today, but it's, it's very pretty. But I'm thinking of these in black and white because I'm thinking with this, kind of heathery stuff around that's real nebulous. Plus these strong black and white lines. This could end up looking really post apocalyptic somehow. Or, or, it's just a weird environment, as pretty as it is. So, I've been working the shots.

it's very important in a situation like this to really move around a lot. I found myself getting down low a lot, mostly to try to simplify. Its, it's a little bit frustrating in this kind of shooting situation. Because you'll see the shot that would be perfect if there just wasn't that one other tree there. Now I might remove some of these extra trees in some of these shots, but I'm trying to do most of it through camera position and angle. And that very often means getting down low to move the horizon line to try to simplify the frame. Turns out to just be a really fun, very satisfying shooting experience in a place where I really wasn't expecting it.

Now I say all the time, oh good photos can happen any where. But it's hard to remember that and it's hard to really follow that. So, I would offer to you the challenge of get in your car, do not set a destination. Just take off driving and see what you can see. Keep your eyes open. Keep your eyes open for strong lines, for strong tonality For strong color choices. Anything that you feel even the slightest impulse of, oh I think maybe there's some raw material that I could work with there. So I shot this for a while and then something changed.

You know that feeling that you have where it's difficult to shoot around your own house or your own neighborhood because it's too familiar. You can't imagine that any of it is actually interesting. When I first stepped into this scene, I thought, wow, this is all really interesting. After only 15 or 20 minutes though, there was just a slight shift, my eyes went a little numb to it. It stopped being about this big play of geometry and tonality and started being about a bunch of trees. And at that point I make a shift in my head where I go eh, who's going to find a bunch of trees interesting? So I decided to stop because I don't want to come away from this situation feeling, I'm a lousy photographer, I couldn't see anything.