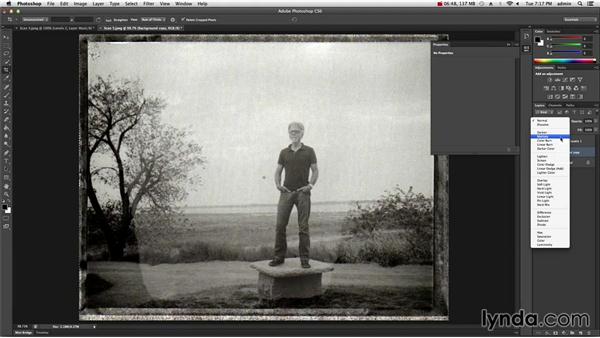 Awhile ago on ,The Practicing Photographer, Troy Word talked to us about the revitalization of peel-apart Polaroid film that works with old Polaroid cameras. So if you can find an old camera. You can get this wonderful black and white film. And by peel-apart, I mean, you pull this sheet out of the camera, you wait a while, you peel it apart, and when you're done, you have this cool black and white instant Polaroid print. And Troy talked a lot about just going from the digital world back to the fun, random quality of Polaroid print where you don't really know what you're going to get and so you're surprised.

And how that can Really kind of invigorate you and get you back into image making, and he's right. There's another part to the Polaroid peel- apart print process though. Can't believe I made it all the way through that sentence. And that is that ,there's a negative that's produced, that bit that you peel off and usually throw away is actually a negative and if you've got a scanner, you can actually scan the negative and do some cool things with it. And that's what we're going to look at this week on, The Practicing Photographer. We just took a Polaroid picture. I have scanned the negative. And here's what came directly into PhotoShop.

It needs a lot of work. First of all, it's a negative, so it needs to be changed to a positive. But even before we get to that, I just need to straighten and crop it, because I did a really sloppy job of scanning it. Now, one thing about these Polaroid negatives, they're very fragile. They're very fragile physically, the actual negative can come apart. But also that surface is very fragile. It stays wet for a long time. It stays tacky for an even longer time. It can pick up dust and grunge. And you can do what I did, you can put it on the scanner too early, and that wetness can be mashed around and make a real brightness differential.

It's almost like a stain. I'm just straightening and cropping. And I end up with this. First thing that happens is I need to swap it out of being a negative I need to inverse it. I can do that by hitting command+I or control+I on Window's. Or I can go image, adjustments, I think it's in here, invert, it's one of those things where I've used the command key so much I've forgotten where the actual menu item is AHA! This is starting to look like a photo. It needs a lot of work still. Next thing that happens is, it's backwards. The negative is the geometric opposite of the positive. So I'm going to go image, image rotation, flip canvas horizontal.

And now I'm getting back to an image that's starting to look normal. The tone is way off. I need to adjust my black and white. I'm going to do that with a levels adjustment layer. I could try and do it with the eyedroppers, but I'm finding it's working better if I just eyeball it with my actual. Black and white point sliders. If you don't understand levels, or what I'm doing here, don't worry, there are lots and lots of PhotoShop courses in the lynda library that will explain all this to you. So I'm just trying to get good tone, and as I get my black and white point set, as I get the contrast in this image improved, this is when I start to see the artifact that I created by throwing the thing on the scanner too early.

There's a big, what appears to be a stain, right here. An area of dramatically different brightness that I need to adjust unless I'm going just for a pure grunge found object look with all the degradation that I can find; maybe I want to leave it there. Except that, well to be honest, it's a picture of me and I'm looking too low contrast. I want to fix that. There are a lot of different ways that I can think of to do it. I'm not sure that any of them would actually work. What I'm going to do, though, is, duplicate the layer and use a blending mode.

There's a mathematical calculation being done between two pixels resulting in a new pixel. This first batch tends to result in darker pixels. The next batch in lighter pixels, and I've never really been able to describe what the rest of them do. A lot of people get intimidated by blending modes, because they think, well I can't ever predict what they're going to do. That's fine neither can I. I just try them until I get results I like. I do know that multiply's always going to darken and so on and so forth. For example if I hit multiply I get this, that's too dark. In fact, probably all of these darkening things are going to be too dark which makes me think the lightening ones are going to be too light.

I think it's going to be more these soft light, hard light things. Soft light's pretty good, it's really Darken that up. Don't worry about this part. I'm just looking to get good results in here. I'm going to go more for, no, I think maybe it is going to be soft light. It's preserving more of my shadow detail. So, great. I've got good exposure in here, and now bad exposure out here. That's no problem. I'll just add a layer mask by clicking right here. Grab a big paintbrush and some black paint and what I'm doing is I'm masking this layer that's darkening things so that it just doesn't darken this outer part of my image.

And as I do that I'm bringing that adjusted layer more into agreement with the tonality of the lower layer. And it's not perfect. There's a seam here. But if I wanted perfect, I wouldn't be shooting with a peel-apart Polaroid and I wouldn't be worrying about the negative. I'd be paying more attention to the print. So I can now go in here and just brush in some tonality of a different kind. And that looks pretty good. The overall thing is maybe a little too dark, so I'll Beef up my midpoint there, and that looks pretty cool.

I could go in and retouch that scene some more. I could clone that out but I actually like that in there. I like all this texture. To give you an idea of how much texture there is, take a look at the scan that I made of the actual print. So here's the print. Here's the negative. Think I actually like the negative better. I really like all that texture. We're all out shooting with our smart phones now,that with Instagram and Hipstamatic and things, we're using a tremendous amount of digital technology to achieve this look. I'm getting it just by peeling apart these two pieces of paper. So I really like this. I do notice right away one thing, one other big difference.

This is truly grey scaled. This has a color cast to it. I like the color cast. I think I might keep the color cast. But I just want to give you an idea of what it looks like if I actually convert this all the way to gray scale. Photoshop's going to warn me that it will flatten the image. I don't want it to do that. Uh,then it's telling me there's a better way to convert to grey scale. That came out too dark. Maybe I do have to flatten. Image mode grey scale. There we go. So here's the grey scale version and the grey scale original. I'm going to undo that grey scale conversion because I, I like having that color tint in there.

I want you to notice one more thing though, I'm going to zoom in just a little bit. oh, that's 200%. I guess I'm not going to zoom in. I don't want to go in to where I'm looking at larger than life pixels. So I'll stay here. The positive actually looks softer than the negative does. I don't think it is. I think that's a function of all of the noise that's in the negative. This is sometimes a sharpening technique that you're going to use in any images to apply a little bit of noise. Because you'll get the appearance of more sharpness. Because very often the noise will create a contrast change along an edge. So in addition to getting all this great texture, I'm also getting an image that looks a little bit sharper.

One last thing, I can,I can scan my negatives just because I get this cool, grungy, Instagram like look. I can't believe I'm scanning a Polaroid and saying that it looks like a digitally altered image. Any way I can get that cool retro look. Another thing, it gives me though, is very often when you are shooting a Polaroid,particularly of a friend, you give the print to the friend. This is a way with a negative, that I can keep a copy for myself, if I don't have time to scan it. So, if you are interested in Polaroid, if you're interested in the peel-apart Polaroid that is now once again possible to buy, don't forget that your scanner and your computer can have a big part to play in your Polaroid process, giving you these cool opportunities off of scanning negatives.

I can now print this. I can manipulate it further. I can colorize it by hand. There's lots of stuff I can do with it.