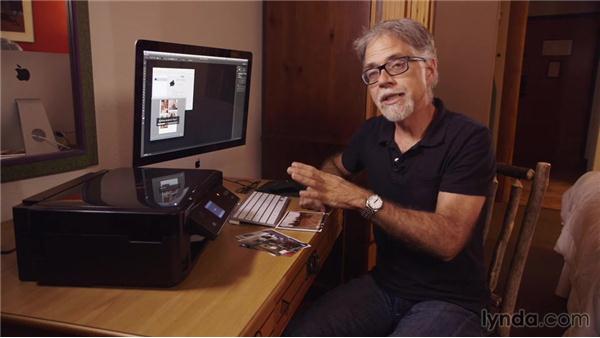 Hi, I'm Ben Long. And this week on The Practicing Photographer, I'm hiding from my relatives. No, not really. I'm here at this family gathering. And I've started a process before I got here. Which was to begin an archiving process that I think is going to go on for a long time. My parents have a bunch of pictures. There are lots of other relatives with lots of pictures. I know that I would like to have copies of them The pictures. And I'm sure that we would all like to have copies of each others pictures. So I got here, and went out an bought a cheap scanner.

I didn't bring it with me. You can get scanners for under $50 now. So I just went and got one and had it setup. But before I came, I asked all the relatives I could get a hold of to start bringing photo albums, prints, not slides. That's a whole, other question. So, I've got this big mess of, of prints here that I want to start scanning. This is a great kind of a long-term project to do around holidays. Or any time you're going to have a bunch of relatives all in one place. So, I'm not going after great high quality scans here with this cheapo scanner.

The thing is, most of the prints that I'm scanning were shot with cheap cameras a long time ago, by relatives who honestly, didn't know what they were doing. So a $30 to $50 scanner's going to give me all of the quality that I need to get a nice archive of this huge mess of photos that's around. And I'm sure this just the tip of the iceberg. One of the nice things about working with a flatbed scanner like this on a, on this kind of project, is I can just throw a whole bunch of' em on the scanner. Start it scanning, and get an entire sheet of images that I can then cut apart later.

Some scanners will do that for you. And when you're out scanner shopping, you may want to think about a few different options here. This scanner is actually more than the cheapo $50 dollar scanner. This is like a $99 scanner. But it offers a couple of other work flows that I'm curious to try. This scanner can work as an entirely stand alone unit. You can put a SD card in it, and from the front panel just hit a single button that will scan directly to the SD card. So I'm thinking of taking this out later, and just leaving it set up somewhere. And letting all the relatives know that when they get a chance just come by, throw their images on, hit this button, they'll all end up on an SD card.

So I could get them to do a lot of the work for me. Another thing that I'm doing here is as, once I got started scanning, I noticed that there's a lot of text on the back. dates, locations, people's names. So after I do each scan, I'm just flipping them over and scanning the back also. Because there's some really handy information there. This is a totally brainless activity. It's great, I can just sit here and mindlessly shovel images on. And as I do, be gathering all this information. So this is a really nice thing to try. Again over the long term, I feel like I'm really going to be able to build up a big archive. The images are going to need a little correction.

And I"m going to show you a couple of quick things you can do to get color back in whack. If the colors out of whack on your images. The only thing this gives me, is a really nice way of once my images are, are digitized, I can easily get them out to all those relatives. It won't be up to me to actually go and have prints made. Thanks to photo sharing sites I can just take all this stuff, upload it to a photo sharing site. Send out an email address to all the relatives, and they can go take care of ordering whatever prints they want. Or coffee mugs or cookies or all sorts of things with these images on them.

So, I'm just going to quickly open up one of these scans that I've made. Now, some fancier scanners will automatically cut the images apart for you. They will detect separate images, and create separate documents for each one. This scanner that I have, is not doing that. So I have to just go into Photoshop here on my own. There are a lot of different ways of, of doing this. I'm just going to use the Marquee tool to select an image, copy it, create a new document. And when I do, it will automatically create a document of the correct size to hold that image.

And I can just hit paste. So, I need to refine my crop here. I added a little border that it doesn't need. This image has yellowed over time. That's not, of course and unusual thing. And different types of film will change color more quickly in, than others. Polaroids for example, will fade faster than Kodachrome prints. What's happening is some of the inks or some of the dyes, some of the photographic chemicals that make up. It's not really ink, but some of the pigments that make up this image, fade faster than others. And so you get a shift in one direction or another. It's a very easy thing to fix in Photoshop. I'm just going to add a levels adjustment layer.

I could also do this simply with the levels command, that would be a more destructive edit. I'm going to grab this middle eye dropper. And ideally, I would click it on something in the image that was supposed to be gray. I usually find that the catchlight in a person's eye when it's actually pure white, works really well. I don't have anything like that here. I'm going to just try that. That's too blue. But it still looks more natural than, than this overly yellow cast did. That's pretty good. I'm just mostly watching his flesh tones, that's the part that I care about.

I'm not going to get the color back to color perfection. I would just like it to not have that terrible color cast. I can very quickly then go through here. Eye dropper on all these things to get the color right back to where I need it to be. Save these out and I'm ready to go. When I'm done. I could try and lug this scanner back home. But I don't think I'm going to. I'm just going to find a relative who wants it and give it to them. It's affordable enough that I don't need to be carrying this around. And I've got a nice scanner at home.

So I think I'm just going to leave this with someone else. Maybe it'll end up being like, you know, the fruitcake that gets passed around every holiday season. It'll be up to somebody to bring the scanner to the next event. So that we can continue this project.