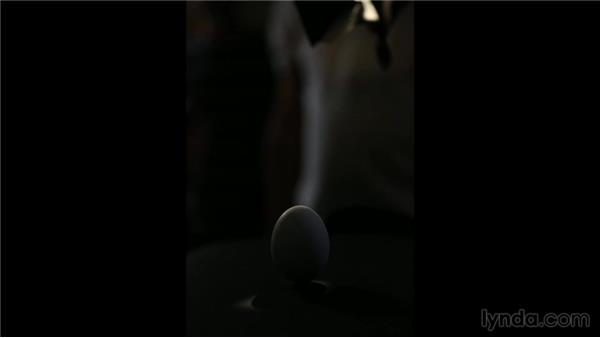 Photography, of course, is entirely about light, and you're going to spend the rest of your photographic life just continuing to explore light and, and always learning more and more about it. In the first part of this installment of the Practicing Photographer, I gave you a challenge, for a particular way of exploring and investigating light and that was shoot an egg. It seemed like a very simple assignment to when you just say it as, go shoot an egg. But if you tried it, I am sure you found it to be a little bit challenging, especially when I said to try to get some emotional response and to try to do it through a manipulating light.

We gave the same assignment to a group of high school photography students here at the Oklahoma Summer Arts Institute, and after they were finished with it we had a group critique. We're going to take a look at some of that now, you're going to hear me, the photographers, Troy Word and Konrad Eek, as we look at what these students came up with when tasked with trying to draw emotion from an egg. >> So who's, who's this? Chris, alright, good. Well I think you achieved it really well. I mean, I, I like you know? The use of your light and, you know, repeating, choosing to backlight it like that. I think it's really effective.

And it actually, backlight is like amazing for opening things up and, and you know? Giving it a kind of glow. I think you totally feel that, I mean, that's what I get from it. It's like, sort of a forgotten little corner of decay somewhere, you know. I mean maybe the bug hasn't forgotten it. There, you know, there, I guess you could say it's hopeful the bug has found a giant egg that's going to feed him for the next, you know, hundred years basically. But, well done. I mean, I think that's exactly the exercise, is like, you know, use the shape of the egg, create an emotion, and I think you achieved that, so good job.

I mean, I think it has an emotional resonance, I don't know what exactly emotion it is, but I think it's very beautiful. And it certainly, there's something to the repeating. Circles, and you know, even just this, actually, funny enough, really I think, makes it. If that was just a black field, I think it would be less interesting. I would love to see a black and this, in black and white would probably be stunning. You know, and maybe to look. You know, this is another situation with your raw capture where there will be a ton of range in here and if you convert it to black and white.

You can play with your grayscale a lot and, you know, you could really get something that just looks like a, it's almost, you know, similar to some work that, that's done by early photographers you know, and I think it has a real classic, feel to it. And just the way you composed it, to the left I think really works, if it was centered it wouldn't work. And again that's something, you know, Photoshop, you could go in and you could lift that. You know, if you wanted to emphasize it if you want to do that. You know, obviously the, for me the problem with Photoshop is you have so many possibilities, sometimes you're tempted to use them when you shouldn't.

Sometimes less is, I mean most of time less is more, and just because you can do it, doesn't mean you should, but you, you know, the great thing about raw capture is you can go back in and then rework it, you know. Anybody else have any thoughts, or? Ooh. I think it's fabulous. You know, I love, it's a very surreal, you don't quite understand what's happening. But it almost you know, seems like you know, the alien egg that they discover in the cave, you know, as they're, they're exploring in the, in the fit, the sci-fi film or something, And this is fantastic.

The way it almost looks like it's levitating. And you don't understand what that is, it's like a, strange waterfall of something or, you know, smoke or. But I think, you know, that really provokes a strong emotion that shot, I think, and it's really, beaut, you know, beautifully done with the light, I think it's excellent. >> Yeah, it's all about the light. >> Who, okay, good. >> These might come together. >> So repeating the, the shape of backlight, and, good, it's very, you know, well composed and exposed, and it sort of has a strange, almost, you know.

Google Maps kind of thing, it's like a tiny landscape, but in a way, almost like a giant satellite image, you know, at the same time, it kind of has a couple of things going on. >> I like the light against dark here, mirrored with the dark against light here. This is a really cool symmetry here, I think that's why I want a little tighter crop in here to really bring the eye right in there. >> Good. Well done. Ooh, whose is this? Alright, good. I think if you just put this on a wall and ask people what it was, they'd think it's an astronomy picture of a planet, and again, it's all about the light, it's a great use of light, the side light, you know where light can create shape, you know, even in the texture, you know, I mean.

Texture really is revealed by the way you use the light and by taking it to the side, you always get more texture which is exactly why in portraits a lot of times you want the light, right in front because you don't want texture. You want to texture away. So that's great. I mean it looks like a, I don't know. There's like a little bumpiness there and everything which is really interesting. Again, this maybe one where you go into RAW, and if you, you may be able to bring more texture into it. So that would be interesting to, to look at.

And same thing, I mean this is perfect situation where you want to be shooting RAW or JPEG, that would be it. In RAW you can You may be able to find even more in it, so, good. I know that Conrad, Troy and I were surprised by the quality of the work that the students produced. Also, I want you to know that they did that in about an hour and a half, two hours. This was not a long assignment, they had an early afternoon to do it, an early afternoon in, in kind of the worst light of the day. Still, they were using natural light. They were using a couple of light sources that we provided and they were using a lot of creativity and ingenuity.

So if you haven't done the assignment yet, if you're kind of cheating and watching the second part first, hopefully this was a little inspiring for you. If you want to make it easier for yourself, remember this is an exercise. You don't have to come out with. Photos that you wouldn't show anyone else, just as a musician doesn't worry about performing scales for somebody. This is not about trying to get a, a really fantastic image for a show. In fact, honestly it's a weird exercise admittedly. You don't really need to know how to shoot an egg. But again an egg is a round shape a lot like a human head or a human body, it's a really good exercise in understanding how.

Light works. So if you haven't tried it, give it a try don't put too much pressure on yourself, give yourself about an hour and a half and work with whatever light you can find.