Posing and shooting pairs of people 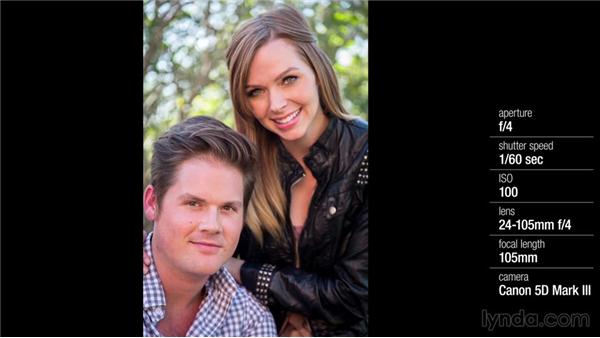 - Alright, see if this sounds familiar. You're at a family gathering or maybe you're at work. You're somewhere where there are a couple of people that you want to take a picture of. Either you want it, or they say "Take our picture," or you know that you just need a shot of these people. So you go, "Oh, okay fine." And you have them stand next to each other and you pay attention to your exposure stuff and you take this picture. That's a nice picture, isn't it? They're a cute couple. Boy, it's boring. It's just a boring picture. I mean, they're not boring but the picture, it's just, it's a snap shot.

It's almost a mug shot if we put numbers in front... I don't know. You can't stop being a photographer when it comes time to just grab those utility shots that you need. I need to compose this shot, I need to work with the elements in the frame, I need to absolutely forget about them as people and just start thinking of them as objects to be exploited for photographic potential. But I'm not going to let them know that, I'm hoping they didn't hear that. So the first thing I want to do is start to think about the lines of the scene, and in a picture of people you're drawn to the eyes.

If your goal as a photographer is to control the viewer's eye through the scene, what I'm doing right now is making their eyes just pffft. They're just going right across from one pair of eyes to the other. I'm going to start by separating their eyes. So, Chrissy why don't you sit down. And Doug, go ahead and get on the table next to her. And, okay, right away things have really changed here. Their eyes are at different levels, that's going to lead the viewer on more of a trip through the frame. Now, what I have to do... Oh that's nice. I have to figure out if it's possible to actually get a shot where their proportions relative to each other don't look strange.

Because Doug is a very different size. That looks good. Guys, let's swap it up. So at least their eyes will be on different levels still but maybe he won't look so much like he's completely towering over her. That's better. Okay, good. Right away, there's a huge difference here between that first shot where there was nothing but basically horizontal lines in the image, the line in their eyes, the line in their shoulders, now there's a path to be taken through here.

Notice the other things I've done here. I've gotten no extra space in this image. It might be tempting to line them up like that, and shoot a shot like this. I don't really need to know what kind of shoes they're wearing. Again, it's all about the eyes. What am I doing with all of this extra stuff in there? When I get in real tight like this, that's where the image gets clean. I've got no extra background. Let's see about going even tighter. That's pretty good but the frame is feeling crowded. Guys, can you get even closer together somehow? A-ha, now I've got some latitude to really get in here tight.

Now, Chrissy is sitting a tiny bit behind Doug. I'm shooting an F four, that's probably enough depth of field but as soon as they move onto different planes I need to start being aware that I've got to be cautious of that. That it's possible that one or the other is going out of focus. So I'm going to go ahead and stop down a little bit, I'll go to five six and shoot that again, that buys me a little more focus latitude. I'm shooting just in open shade here, and this beautiful soft light is just wrapping all around them. I can't tell for sure on the back of the camera, it looks like white balance is a little cool.

I could switch to shady white balance but I'm just going to fix it in my image editor. Doug is that shirt gray stripes? - Gray stripes, yeah. - Fantastic, he's wearing a gray card, I've got white balance after the fact with no problem. That's pretty good. Let's get even tighter. Now, to do that I'm going to need you guys even closer so what I'm going to ask you to do is get in a position that may feel completely unnatural but don't worry about it because I'm cropping out a whole bunch of your body. You don't have to create the realistic comfortable scene that people might be sitting in, I can make them do whatever I want and just make sure it looks good in frame.

Go ahead, yeah Chrissy can you get... Yeah just twist and contort and get, whatever it takes. Ah there we go. Now, at five six my shutter speed's dropped a little bit I'm going to bump up my ISO to buy myself a stop back that I think I lost. Okay that's good. What else can we do with eye positions? I can sit here and think about this all day, but I've also got some help here. Guys, any ideas? Are you thinking anything, are you feeling anything? - For eye levels? - Yeah.

On the ground is interesting. I can change my relationship to your eyes by changing our height here. - We both on the ground or just one? - Actually yeah, Chrissy get up on the... No on the bench here. So, I'm just going to keep playing with this. Now, there's a weird status thing that happens when you start shooting down on people. It can make them, it can imply powerlessness or something like that. In this case, I'm not too worried about that. This is interesting. Their eyes are at very different levels but also the relationships are a little bit different because Chrissy's looking more straight on and Doug's looking more up at me.

That changes things. Chrissy, can you tighten up a little bit? Yeah there we go. I can just keep working this all day. What I'm really doing is thinking, again, I'm thinking graphically. I'm just thinking about the lines in the scene. I can start playing with relationships with the background. All the things that I would do doing any type of normal shooting I can do with my group portrait shots and end up with a picture that's much more interesting than a line of two people or a line of more people. So next time you're asked to shoot the office party or something like that, spend some time arranging people in a thoughtful way.

Paying attention to the relationship of one person's eyes with the person next to them.