Making a 360 degree panorama on the iPhone 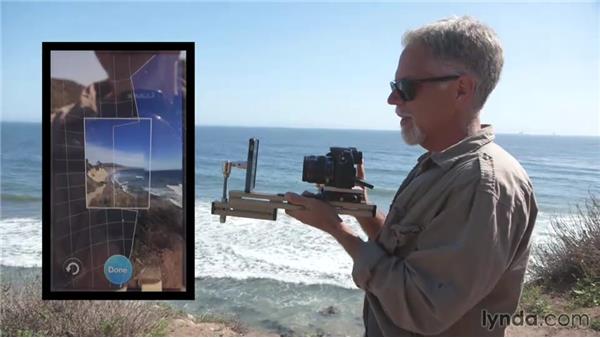 When you're facing a big broad vista like this, it's hard to know where to start to try and capture it. Obviously it's nice to try to find a representative sample that makes a good concise composition, but sometimes in a spot that's so pretty you can't do that. And so you aim to get it all. Fortunately, as digital photographers we have a lot of tools for doing that. The ability to shoot a panorama and stitch it together into a very wide frame is fantastic. If you have an iPhone, you've got another option, which is to shoot an entire 360-degree panorama.

Now you can do this with a regular camera. But it requires usually a special tripod head, and a lot of post production work. With an app on the iPhone called 360, you can very easily shoot full 360 degree panoramas, and that's what we're going to look at this week on the Practicing Photographer. I'm Ben Long, and I'm holding a very odd contraption. If you have seen my iPhone course, you've seen this contraption already. This is simply a way that I can show you what I'm doing on the iPhone screen. I've just got a video camera pointed at the iPhone.

The iPhone's camera is pointed out. So, you're going to be able to see the screen and my finger. Unfortunately, you're also going to see a lot of glare on the screen. But I think you're going to be able to get the idea of what's going on. So, I have here the 360 app. I'm just going to launch it, and it immediately drops me into this shooting mode. So it's showing me a view, out the camera, but it's also using the iPhone's tilt and, and bearing sensitivity to figure out where this view fits inside of a giant virtual sphere, that's what this grid is.

So now my job is to point the camera enough ways to completely paint the inside of that sphere with imagery. It's going to take care of doing all the stitching and exposure equalization and that kind of thing. It's really pretty simple, but it takes a while. So I'm going to start it up and just work my way through this and you're going to see as I go how I start by taking a picture and then I just start tilting until on this particular slice I feel like I've captured a good amount of horizontal, I'm sorry, of vertical imagery.

Now that I've got this slice, I'm going to pan over here to the left, let it fill that in and start tilting up and down to grab this. So, I'm just shooting a whole bunch of vertical slices in a circle. I'm not doing anything to compensate for exposure as I move around. I'm trusting the software to all that on its own. It's a little bit of a problem, possibly. Because I'm going to be pointed into the sun. I don't know how that's going to work out. What I'm aiming for, when this is done, is a little VR world that I can pan about.

But something that is very cool about this application, is I can do other things with the results. I can actually output still images in a number of different ways, as you're going to see. So right now I just have to finish painting my way around this circle. I'm getting here to the end and it's, it's, it's actually kind of like a video game of some kind. It's fun just trying to blot out these last little bits. Now it just made a sound indicating that I should have a full wrap so I'm going to hit the done button.

It's going to do some calculation, do some enhancing and then it throws the result into its own internal little camera roll thing which I can get to down here. So here you can see the last few that I've shot. This is the one I just did. When I tap on it I'm immediately into this VR mode, where I can pan around the scene. So this is pretty cool. It's a nice way of giving this to someone else and letting them experience the environment. But I'm a photographer I want print. I want an image on paper. To get to that I go up here to this photo button.

And I've got a number of different options. If I go to stereographic, I get a cool little tiny worlds effect. You've might have seen another Practicing Photographer where I show how to do these the hard way by actually shooting with an SLR. So I got a few different options here. I need to save both of them. Nothing has been saved to my camera roll so if there's anything I like here, I need to go to the share menu, hit camera roll. I can also go out to email, I've also got lots of different social options for posting this stuff in ways that people can really get in and, and do the whole navigation things.

So this is a very cool, very easy, and pretty fun way to capture an environment when you can't find a single shot or even just a slice of panorama that you feel really gets that environment. So, I encourage you to stick this on your phone, give it a try. It's a very very different way of visualizing the world.

Video: Making a 360 degree panorama on the iPhone