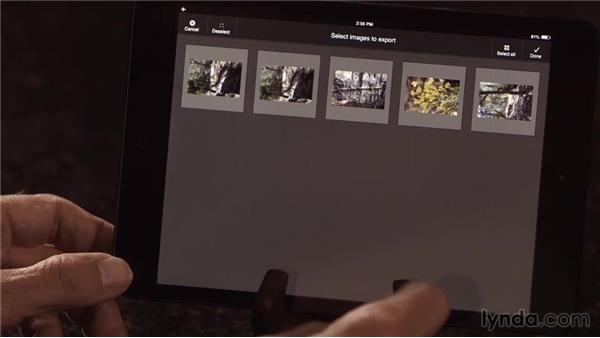 If you shoot RAW + JPEG on your camera, and you work with an iPad, you've probably already discovered something a little frustrating. When you import images into your iPad using the Apple camera connection kit, it imports both the RAW + JPEG files, but you only see one image. There's a single icon that represents both the RAW + JPEG format, and there's no way to separate those two. Now, if you're like me, you're probably not doing really serious work on your iPad; you're wanting to bring some images in. Maybe do a little touch-up. Perhaps even email them off to someone, post them on to a web page somewhere.

You don't really need the RAW file, and the RAW file is huge, so it takes up lots of space on your iPad. And it would be great if there was a way of importing your RAW + JPEG, ditching the RAWs and keeping the JPEGs. There is a way to do just that, which is the point of this week's Practicing Photographer. I have here on my iPad an app called Photos Info Pro. I use it for a lot of different things. It's a great meta-data editor, it's a great way to geotag images. It's really part of my iPad desktop workflow, because it allows me to rate and key word images here. And take all that information back into my computer later.

But, it's also a great way to split apart that RAW + JPEG thing that the iPad does when you import. So, you can see here I'm looking at last import. I have imported a batch of RAW + JPEG images. These are of course each separate images. But each one of these images is two files. I'm going to just pop one of these open here, and you can see in Photos Info Pro's metadata viewer here. The format over here RAW + JPEG, so this one image is both a RAW and JPEG file. I'm going to go back here and hit the export button. I'm going to tell it to select all and then hit done.

When I do, it gives me a number of different export options. There are actually three tabs here. The first two have to do with exporting images with XMP files. That's how I'm able to take my ratings and my keywords and things, and move them back to my computer later. I'm not interested in any of that right now. I'm interested just in the JPEG tab, which lets me export JPEGs of my images to either iTunes file sharing mode, which will sync them back into iTunes later. To Dropbox, FTP, email, or right back to the iPad photo library. If I just tap that, it's working it's way along now.

It's going to spit out the JPEG's of those back into my photo library. When it does, I can go back and delete these original imports and be rid of the RAW + JPEG, and have only the JPEG. To do that, I'm just going to go back over here to Photos. I'm going to go to my last import, which is still right here. Before I delete them though, I'm going to take a look at my camera roll and I see that here they are right down here at the bottom. So, I've successfully extracted the JPEGs, and I could prove to you that they are JPEGs by taking them back into Photos Info Pro.

And you'll see there in the metadata that it is just a JPEG file. Trust me, it actually does work. So, I'm going to go here to last import, I'm going to select all of these, and delete them. And now, I've got only the JPEGs left on my iPad. Gives me a lot more space. I can still do the image editing work that I need for the type of stuff that I do. And not slowly fill up my iPad with all those RAW files that I'm not even, that I'm not ever going to use on here. That's Photos Info Pro, it's a really handy work flow tool for working with images on your iPad.