How to use glycerin as a photography tool 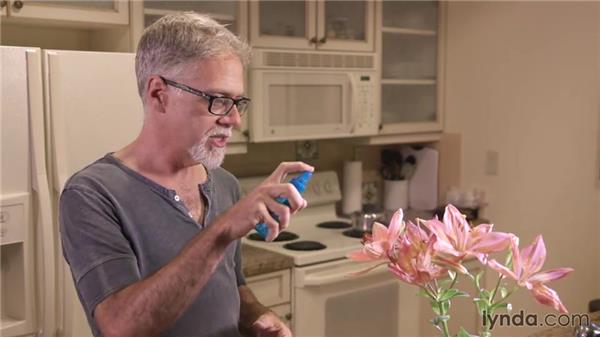 Join Ben Long for an in-depth discussion in this video How to use glycerin as a photography tool, part of The Practicing Photographer.

- If you like to shoot flower pictures, rather macro or not, you probably already discovered that flowers with water beaded up on them have just a really nice extra dramatic look. So maybe you've gone outside early in the morning trying to catch the dew covered flowers. If you have, you've probably already encountered that getting up really early in the morning is a drag, but also that it's hard to find flowers that are covered with dew sometimes, it's hard to find ones covered with dew, and the dew doesn't last very long, and it collects in weird places, it's just a hassle. So maybe you've come inside with some flowers and spritzed them with water.

That can be a nice workaround, and you don't have to get up so early, but the water doesn't stay where you want. There's a very easy fix for that, and that is to go to the drug store and buy a bottle of glycerin. If you mix some glycerin with water, one part glycerin to three parts water, and stick it in a spray bottle, you can then spritz your flowers with your solution here, and it's gonna give you that same beaded water look, but the beads of water are gonna hang around for awhile. I'm putting a lot on here to really get a bunch going in here.

It's not gonna run off. It collects into beads, which is nice. OK, the flower's getting outright soggy. It collects into beads, which is really nice, but it gives me a lot of time to work. Regardless of what the temperature or humidity is in the room, this stuff will stay for awhile, and that gives me time to work out my shot. It also gives me time to do more complicated things like maybe a focused stack macro shot, something like that. It's really luxurious having all of this extra time. Let me just give you a quick look here at what I've got here.

There's not a lot of light in here, so I'm having some depth of field issues. I'm just gonna give you a quick shot here of one of the petals with some glycerin on it. It looks exactly like water droplets, but they're not going anywhere. This is a great trick or hack for making flowers look watery. It's also something you can do if you're a sports photographer and you wanna make someone look sweatier. Be very careful not to get it in somebody's eyes. Food photographers will use the same thing to make a can of cold beverage look like it's sweating and that kind of thing.

So this is a very inexpensive way to put a little bit of extra zing into your flower photos without giving up a lot of control.

Video: How to use glycerin as a photography tool