Going with an ultra-light gear configuration 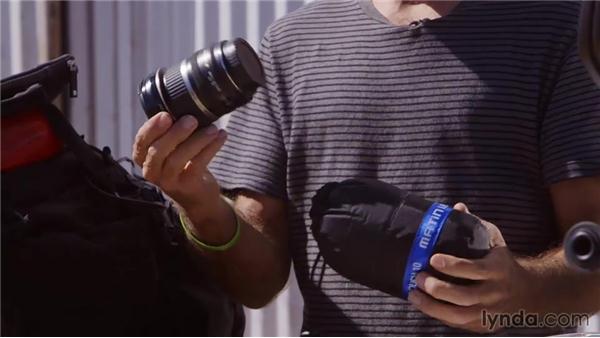 I really love shooting with a full frame camera. For years now, I've been using the Canon 5D series. I really like the extra shallow depth of field I can get with the bigger sensor. I like the huge assortment of lenses that are available. The image quality's spectacular. And, I really like that focal lengths are what I grew up knowing, 50 millimeter means a normal lens, but boy, I don't like carrying the thing around, especially when I add a couple lenses to it. It gets really, really heavy and leads to a lot of neck and shoulder pain, and it makes me sometimes not take my camera.

Hi, I'm Ben Long and this week on the Practicing Photographer we're going to talk about going ultra light with your camera gear. I'm on a motorcycle trip right now. I have very limited storage. I don't have room to carry a lot of things. But also, I'm wanting to do a lot of camping and hiking. I don't want to carry a big camera kit. So I've stripped down to something very, very small, and I started that stripping down process by leaving my beloved 5D Mark Three at home. I switched, instead, to a little Rebel camera. Rebel is Canon's small series of SLRs.

Nikon has their own series. If you shoot with a, a Micro Four Thirds camera, you're already into a small or any mirror-less camera, you're already into a small camera format. What I like about this Rebel is it's tiny, but it has the, mostly the same control layout that I'm used to on my normal full frame camera. So making the switch to it feels very natural. It really works the way I expect it to, and it works with all the lenses that I already have. I bought some lenses specifically designed for the crop sensor camera, but I can also use my macro lens and my tilt shift lens and all that other stuff.

I'm not traveling with those though. I have stripped down to just two lenses. I have a 17 to 55 millimeter, which is roughly equivalent to a 24 to 70 on a full frame camera. Great walkaround lens. It's two eight all the way across. I could possibly get by wha, and look at this, I'm holding this in my hand like this, I could never do this with my 5D. I could possibly get by with only this lens. It happens that I've got enough space that I decided to pack another lens. I brought a 10 to 22 millimeter, which gets me the ultra-wide angles that I often like. Now, I didn't bring a camera bag. Camera bag is bulky sometimes, and it can be hard to pack.

Instead what I did is, I got just a neoprene case for my camera. It almost fits. It's not perfect, but it's enough, takes a struggle sometimes, it's enough that I can get the camera in here and get it some protection, and now I can just stuff this in any bag that I want. So, all of my luggage is now my camera bag. But you might be thinking, yeah, but what about when you go stomping around, how do you carry it? Well, I take it out of this thing. I've got my strap to carry the camera, and I have my extra lens, just, in a lens pouch. What's cool about this is it's padded.

It's very easy to get into. Here's my 10 to 22. So, it protects the lens when it's in one of my other bags, but it's got a belt loop on it. So, I can actually just wear it on my hip and carry my second lens that way. When I swap lenses, this lens can just go in there. It's big enough to hold both. When you're packing in a tight space, it's often very nice to have all of, or have different components, discrete, because I can stuff this into one corner and the camera and its case into another corner. I couldn't do that if I had a big camera bag. Now, I like when I get out here doing some low light shooting.

I like being out at night. It's really hard to do that without a tripod, but a tripod, even my lightweight, carbon fiber, really nice tripod is still pretty big, especially if I want to go hiking. So, I got this thing. Now this looks really, I don't know, like a toy tripod. This is a Tamrac ZipShot and I really like it. What it is, is it's a tiny, little ball-head mount on what are basically tent poles. They're shock-corded aluminum poles that just snap together, and it stands up to be a tripod.

Now, I have very little control here. I cannot raise it. I can't change the length of the legs. This is all that it is. But it can hold about seven pounds, I think. You want to double-check that. I know it's capable of holding far more than my nice, lightweight camera weighs. So, this is a great alternative. It weighs less than a pound. It's very easy to set up and strike. It straps on anywhere. I don't care if it gets in the rain. They're not that expensive, so even if it gets bent up and messed up, I'm not losing out on a great piece of gear. It's not super sturdy. It's not going to do great in wind.

I can't do really refined motions. The head has a lot of give to it, when I set the camera. Still, it's better than not having a tripod, and it's better than carrying a heavier tripod. Finally, for post production, I'm bringing a 7 inch tablet. This is an iPad mini. I have a camera connection kit, so I can just pour right in here. It is in no way a substitute for a full-on computer running my normal photo workflow, but it's going to be great for getting me through what I need now. I can start doing rating and keywording using my favorite software on here. I can do some image editing.

I can use it as in internet terminal to get images out. So, this is my whole rig here. It doesn't weigh very much, and in fact, I can actually kind of just hold the entire thing in one hand. This is my entire two lens, SLR, tripod ready, image editing suite, all here in one hand. Doesn't weigh very much. I, I can't even really get exercise out of this. Much, much lighter than carrying my full frame camera. So, if you already have a camera that you really like and a lens system that you really like, you're feeling like it's kind of heavy, start looking into some alternatives that will work with the system you have.

If you're looking to go lighter, do a little research. See what bodies might work with your lenses and try to get a sense of what the weight and size difference might be from what you're used to carrying.