Give yourself a year-long assignment 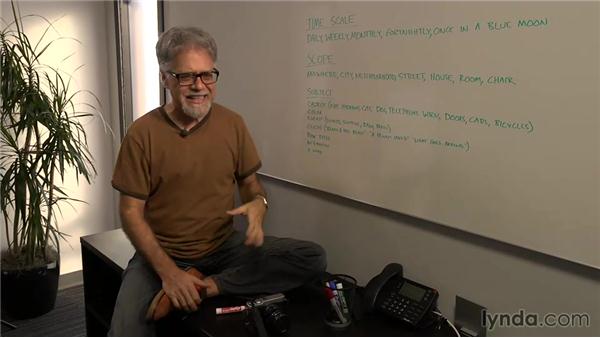 One of the trickiest things about going out to shoot is figuring what to go out and shoot. There's a big world full of potential photos out there, and that can be overwhelming. When you step out the door with your camera. You might, in the face of seeing everything, not really be able to see anything. One way around this is to give yourself an assignment. A working photographer, one who's been given an assignment by an editor or something. Actually, in a way, has an easier time than someone who's free to shoot whatever they want. They've got specific targets that they need to bring back. And that limiting factor can make it much easier to really focus in and see particular images.

So, I'm going to help you out here, and give you some ideas. About giving yourself a year long assignment and you don't have to do a year. You could give yourself a shorter amount of time. But I really like the idea of a year because you go through all four seasons. And each season is going to bring with it a very different light in addition to changes in your surroundings or, or the environment that you might find yourself shooting in. So. To give yourself an assignment, you need to choose a couple of parameters here. You don't have to take all of these. You can mix and match as you like. First of all time scale. And by that I mean, actually time scale is probably wrong.

That should, we should, we should ditch that and say frequency. How often are you going to go out and look for one of these pictures. Are you going to do it daily, weekly, monthly. I have a fortnightly or once in a blue moon, you can put whatever scale you want. You can say on every second Tuesday. Actually, I have to go out every second Tuesday and because of street cleaning and move vehicles around. So maybe I would say, alright, when I go out for street cleaning, I'm going to take a picture. It's a break that I'm taking anyway. Try and work, try and pick a frequency that actually works with your schedule.

You don't want to miss a date because actually you're too busy. If you have a very busy schedule, don't go for the daily thing, try and work it in where you actually will do the shooting. It's demoralizing to miss your schedule if you can't maintain it. And, this is supposed to be an inspiring thing that I'm talking about here, so try and make it easy on yourself. Next, scope and by that I mean geographic scope. A lot of times it's much easier if you limit, where you could be shooting. So you might choose, alright, anywhere in the world is fair game, or, just the city or town I live in, just my neighborhood.

An for that, you might need to specifically lay out some boundaries that you're going to define as your neighborhood. Maybe just your street. Maybe only in your house. Maybe only in your room where you're sitting when you make this plan, or maybe even just in the chair you're sitting in. Maybe you're going to say the really drastic project of every day I'm going to try to shoot a picture in the chair that I'm sitting in. You're gutsier than I am. Next, if you want, so you could leave it at that, you could say every day I'm going to constrain myself to my neighborhood. And I'm going to go out and shoot and I'm going to try and come back with something.

That's still a pretty broad range of photographic possibilities. So maybe you want to give yourself a subject, can even pull something out of a hat. I've got some suggestions here of kind of some categories, maybe a particular type of object. Maybe, every week you're going to stay in your city and you're going to shoot a fire hydrant. Or a cat or a dog or telephone wire or something in the air or doors or cars or bicycles. it could even be something more abstract, a particular kind of texture and particular kind of light. Maybe you're going to go out fortnightly on your street and try to shoot something that's backlit, maybe you really want to experiment with that.

Some other suggestions for a subject, color. Just pick a color, yellow. I'm going to stay in my town and once a week I'm going to go shoot something yellow. And you don't have to decide what that is ahead of time. It could be anything. An event, sunrise, sunset, rain if you're regularly, if you're a social person. Maybe your'e going to shoot a party every week. A cliche, just pick one. Beauty and the beast, a penny saved, what goes around. You then interpret that however you want, and what's interesting about doing something a little more abstract like a cliche. Or I also have down here just a word you could choose the word determination, or suffrage or, I don't know, any word that you want.

Those are abstract enough and open enough that it's interesting enough to watch maybe how your take on that word changes over the scope of your project, particularly if you choose particularly if you do it for a whole year. book title can be interesting sometimes, crime and punishment. Maybe you're going to go and shoot that, whatever that means to you at any particular time. Or you can pick an emotion, today I am going to go shoot melancholy or, or ecstasy, or whatever you want. And again, you would do that within the scope and at the frequency that you've speced out ahead of time.

Again, try to, try to make this a challenge, but try not to make it such a challenge that you actually discourage yourself from do it, doing it. Set yourself up so that you're not battling your terms here. This is a, again, a great way to limit the world to help you hone in on some photographs. It's also a way to develop the discipline to be practicing all the time. Improving as a photographer is contingent on regular practice. I've got a friend who shot for quite a while just in his room. And came up with a beautiful selection of images.

He's self-published those as a book and it's really inspiring. He also wrote a lot of text to go with it. That's another great thing that can come from this. You don't know what kind of story you might stumble into by really focusing on a particular subject. You don't know how your own feelings might change and it's not a bad idea to be writing those down while you're working. Those can lead you to more ideas about how to shoot. So, write this down, codify it somehow so that you can hold yourself to it throughout the project and give it a try for you know, just a year.

Video: Give yourself a year-long assignment