Getting your project out into the world 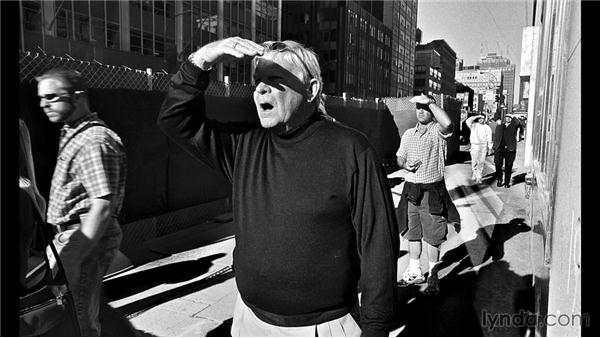 Join Ben Long for an in-depth discussion in this video Getting your project out into the world, part of The Practicing Photographer.

- One of the difficult things to learn in life is that just doing good work is not often enough. You can do really great work, and a lot times, the world just won't notice. I'm here with my friend, Steve Simon. Steve, you do really good work, and... - Thank you. You have more than anyone else I know figured out that just doing good work, just taking good pictures doesn't mean that you'll necessarily get anywhere. You've got to hustle, you've got to get those pictures out there, and you've got to find creative ways in doing it. - No question, no question, and you want me to jump right into my story? - Steve has a great story about a really weird angle into getting some work out there, so...

- Sure, I'll jump into it, it's kind of a serious topic because it involves 9/11, and a project that I had done just after. So, I just moved to New York City, photographer, 9/11 happens. Don't really know what to do, the city was kind of in shock. But as a photographer, I wandered with my cameras. I happened upon the Ground Zero area. I was kind of avoiding it, you needed press credentials, they wanted people to stay away. But when I was around that area, I noticed the reactions of people, and it was very intense.

And I thought to myself, well maybe I can do a project where I could document, you know, what had happened through the faces of the people that felt compelled to come and see it for themselves, I think a lot of them just to see that it was true. It just seemed so unbelievable, so... - You didn't actually shoot Ground Zero at all, you only shot these people that were having a reaction. - Exactly, exactly, and you know, part of it was I couldn't get into Ground Zero, but you know what, there was a different story to be told. So from the end of September to the end of December, for three months, and you know, this was the film days, it wasn't that long ago, with my Nikon F100 and Tri-X film, I shot 100 rolls of film.

I had all this material, I love books, and I thought you know this could be an interesting, important book just to kind of show this side of what had happened through the faces of the people. So I put together a book dummy. I took what I thought were the strongest pictures, and put together this black and white book dummy. Again, it was a long time ago it seems in the digital age, and I thought this could be published. I called it Empty Sky, and maybe this could be published as a book, you know, one year later. So I sent it out to all the publishers that do photo books.

It was easy to find out, I went to Barnes and Noble, or maybe it was Borders at the time, and you could see in the photography section who's publishing these books. And I started getting in the responses, and they were rejection letters. And I have a whole file of rejection letters. (Ben laughing) And some of the rejection letters were nice. Some of them gave me some advice, and I would try and make it better, if that was possible. I wasn't going to give up. So I continued to try and get this thing published, and with all these rejections coming in, I thought I'll maybe try something different. In the building where I live, in the penthouse above where I am, was Susan Sontag.

And Susan Sontag has a connection to photography that I think most students of photography would be familiar. She wrote a book called On Photography, which is kind of required reading, - Very important book. - in most photo programs, so I thought, you know what, if I can get Susan Sontag to write a forward for my book, maybe a publisher might take notes, and it might help, you know, push me over the edge to get this thing published. So I brought my book dummy to my doorman, I asked, could you get this to Susan Sontag? And he said, "Sure", I mean I knew where she lived, I could have left it like an abandoned baby.

I thought it was more professional to do it this way. - [Ben] Probably. - [Steve] Yeah, and he did. I know this because the next day, the very next day, I got a call from Susan Sontag's assistant. He said, "She probably won't have time to even look at it "for a few weeks, maybe I should save you "some time and just send it back." And I told him, look, I've got no expectations, I just want her to see it, is there any way you can show it to her. At the end of the conversation I felt confident he was going to show it to her, that was it. I continued, I hadn't heard anything. I continued trying to get it published. I continued to get these rejection letters. And then out of the blue I got a call from this guy.

He said, "Hey my name's Andy Levin, "I'm a photographer in New York City." He's now out of New Orleans, and he said, "I just bought a copy of your book dummy "from a guy selling it on Seventh Avenue for four dollars." I'm going like, what, what? I was secretly happy he paid four dollars for it, but Andy went on to say, "Yeah, the guy that sold it to me "said he got it from Susan Sontag's garbage." I'm going like... Anyway, it's processing, but before I could really think about what's going on here, Andy said, "I have this friend at Life magazine, her name is Barb Rausch. "She's publishing this commemorative edition, "One year later, 9/11, can I show it to her?" And I said, yeah, please do.

To make a long story a little bit shorter, I ended up getting eight pages in this Life publication, The American Spirit. I got my biggest paycheck since arriving in New York City, eight thousand dollars. And, with the credibility of being in that Life publication, I was able to find a small publisher in my native Montreal to publish a bilingual edition of Empty Sky. And it all came from Susan Sontag's garbage, because I went back to Ralph, the door guy, and I said, Ralph, you're not going to believe this, this guy said he sold it at Seventh, Susan Sontag's garbage...

"Oh yeah, that's Steve." And Steve, Steve Kahn's a guy who lives in the building. He knows I tell the story. People in New York throw out good stuff all the time. And he goes to the recycling, will pluck it out, and you know, sell it. I think he's on Craigslist now, but at the time Craigslist wasn't around, and it happened. And it all came from Susan Sontag's recycling. Moral of the story though is that you never really know how opportune. I did all the right things, I sent it to all the right places. It gets tossed out, and I get it published.

So, I'm glad that kind of happened to me, because it's my mantra. I mean, get it out there, and good things will happen. Don't give on your project, you're gonna get knocked down, you're gonna get rejected. You've got to find a way to keep going, make it better. But don't give up on it, and good things will happen. - So no bad publicity, and no bad recycling bins. My challenge to you this week would be if you have been working on project of some kind, if you feel like you have a body of work or some images that could be assembled into a body of work, start thinking the way Steve did, don't...

obviously you've got to do the straightforward, yeah, look for a publisher, do it the right way. But start thinking about who you might know, or whose garbage you might have access to, and see if you've got some channels there that might help you get a leg up. Steve, thanks again, that's a great story. - Hey, thank you, Ben, appreciate it.

Video: Getting your project out into the world