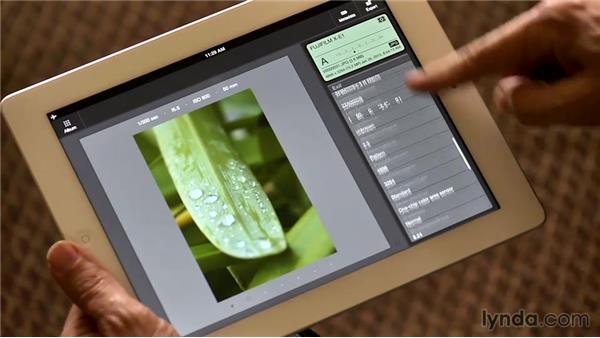 Join Ben Long for an in-depth discussion in this video Editing photo metadata with PhotosInfo Pro for iPad, part of The Practicing Photographer.

I'm on the road. I've been on the road for a while, but I'm traveling light on the road which I'm really liking. I'm taking a small camera and an iPad. If you've seen my course, Shooting on the Road, then you've seen a particular iPad post production that works well for me. Since we shot that, a new piece of software has come along for the iPad that really changes up iPad field production or, or field work flow. And in a way that I really, really like.

It makes the iPad much more usable as a field post-production tool, especially if you're a raw shooter. So here's the thing with the iPad, it doesn't have a tremendous amount of storage in it. So if I'm on the road for a long time, shooting up lots and lots of cards, I can't just dump them all into the iPad. I have to do something else with them. And in that course you saw that I offered, I offered the idea of just carrying lots of cards or carrying a small battery powered portable hard drive that you could dump things into. Those became the mass storage options. The iPad I was using for simple editing of an image here or there, emailing things out and that kind of thing.

But there's something else that I would really like to be able to do on the road. And that is to start on making selects, and working on some up the metadata things that I like to do to images. Now I still have the storage problem on my iPad. I can't just dump lots of images into my iPad. But with this new program called, or this new application, excuse me, called Photosinfo Pro. I can do my metadata editing in the field and have it all sync up and work the way that I want it to when I get home. I'm just going to show you here real quick, that's probably easier than trying to explain it.

I have here the Apple camera connection kit and the SD card out of my camera, I'm going to go ahead and dump this into my iPad. I was actually shooting JPEG today, to make this go faster. But, this also works with RAW files. The workflow that you're going to see works exactly the same with both RAW and JPEG. So, the iPad is recognizing the images that I shot. I'm just going to take them all here and have it import them. So it's copying them from the card into the iPad. Now, to understand how this works, there's one critical concept that you have to know.

If you were a Lightroom user or a Photoshop Camera Raw user, then you need to understand that the edits that you make in your images, as well as the metadata changes that you make are stored in little text files called XMP files. And they just live in the same directory as your images. So what I'm going to be doing here is creating XMP files. Here's how it works. My import is done. I'm going to tell it to keep the images on the card because I'm now going to dump this card to another storage device. Now I'm going to go into Photosinfo Pro. Which looks like this.

It is showing me by default my last import. I can get to any of the other images on my iPad. It accesses the full photo catalog. I can scroll through them. When I find an image that I like I can tap on it. And one thing that's nice is it gives me a nice big preview and a really detailed metadata list. All my shooting parameters. A lot of metadata that you may not even know your camera stores. It's all socked away in here. Photosinfo Pro lets me see it all, I can scroll around from image to image, it does of course also work in a landscape mode, which gives me an easier view of my metadata.

I'm going to go back to portrait just because my hands are tired and its easier to hold it this way. So much for, you know, the advantage of carrying a lightweight camera. So, as I'm going along here I've got this nice big preview, I can rate my images if I like or more importantly, or as important, I can also add any other metadata that I want. I'm going to go back to my album view here. And go into metadata view, and tell it the images that I want to edit metadata for. I'm going to take all of these shots of this leaf, tell it that I'm done.

And now I can add metadata to all of these images. I'm going to add some keywords here. This is a close up shot, so I'm going to add the keyword close up. And when I'm done now those that, all of those images have the keyword close up attached to them. As I define keywords they get stored in this vocabulary list. But I've also got access to all of the other metadata that I would normally use, creator, address, city, copy write information. I can even geotag my images, if I have a wi-fi connection, it will show me where I am and I can have it embed that in there.

So I can assign all this meta data, this is a really great thing to be able to do in the field because very often a lot of things you just won't forget after the day that you've shot. I was recently in Carlsbad Caverns, which is a very abstract place to be shooting. It was great to be able to go back to my room that evening and think through exactly where each image was and make notes in the metadata. But what do I do with this metadata now that I've got it. Well, up here, you'll notice this export tab. If I tap that, I have a few different export options. I can export the master image, plus the new sidecar XMP file that Photosinfo Pro is creating.

Or I can export just the XMP. Or I can export a JPEG of my image. It's this tab that interests me the most. The XMP only tab. I can export in four different ways. To an iTunes shared folder to a drop box account. I can FTP them up somewhere, or I can email them. So I might select a whole bunch of images here, and then say email all of the XMP data to myself, or I could upload it to a drop box folder. So all those tiny little text files which are very small, so they'll transmit very quickly, will go into my email account or into my dropbox.

My images, meanwhile, are going to be copied somewhere else. After I've done that, I can delete all the images from my iPad. I don't need then anymore. When I get home, I can take all of that data that I've, all of those images that I've copied to another storage device, copy it to my computer Take the XMP files that my iPad emailed or dropboxed to me, drop them in the same folder, and all of my metadata is now there. So this is a way that I can rate images. I can go ahead and start my selection process while on the road. I can get my metadata going while on the road and have it all synced up when I get home.

Now, of course, there are other things that I like to do on the iPad. I might want to do a little bit of image editing of an image here or there because I want to send it back to my friends or something. So I could do that before I delete my images, but this is a way that I can do massive amounts of rating and metadata post production without taking up all the storage in my iPad. Photosinfo Pro you'll find it in the iPad App Store. It is for me, the real key now to a sophisticated portable iPad based post production based workflow.