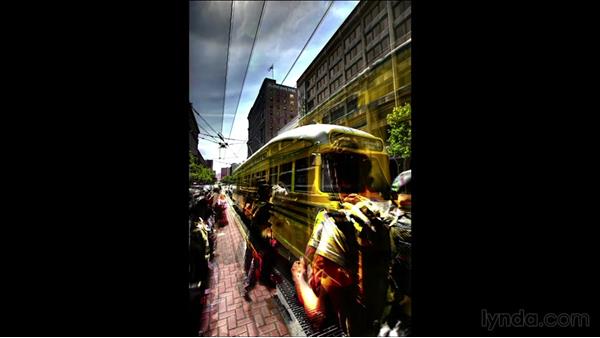 - HDR is the process of shooting a bracketed set of images and then combining them in a way that allows you to capture a broader dynamic range than you would normally be able to get with a normal photo. If you have no idea what I'm talking about, check out my HDR course that will explain how to shoot and process normal HDR scenes. Now, I say normal because normally what you do when you shooting HDR is you shoot your three scenes and you very carefully have them aligned so that they match up all perfectly and then the computer does all of this analysis and you have all of this control that allows you to bring out detail or tone that you wouldn't normally get.

But, there's something else you can do with HDR, which is to do it wrong and when you do that you can end up with some interesting results. I've been doing that a lot. I do a lot of things wrong. This time, I've been doing it wrong on purpose. So, what you're looking at here is a simple shot of a streetcar in San Francisco and just as I would normally do with HDR, I just kept shooting. Now, I was not bracketing my exposure at this point. I was just shooting regular exposures as the scene continued to progress. I was trying to hold the camera steady so that some things in the scene would remain still.

But, I just sat here for a while as the scene around me changed and shot all these shots. Then I took them all and I ran them through my normal HDR process. I used a combination of Photoshop and Photomatix to combine them and I ended up with this, a really strange kind of multiple exposure kind of shot with all this extra HDR processing in it which gives me smeary color and some aspects of one exposure preserved, other aspects of other exposures are not.

It's very difficult to predict how it's going to combine the images and that's really all I did. I cleaned up the contrast and color a little bit, afterwards. But, I really like this image. I've been fiddling with this some more. This is near Times Square in New York. Just trying to find the places where there is something really dynamic happening and shooting a bunch of frames of it and then combining them with HDR Normal Workflow. And it's kinda like fishing, you don't really know what you're going to get. Most of the ones I do don't work out.

But, some of them come out very, very interesting. It's hard to tell what the software's gonna do. It's hard to visualize the full motion in the frame while you're shooting. I would say as far as tips go, you want to find a motion that fills a good amount of the frame. Something that bothers me about some of these, like this shot is there's just nothing happening up here. And I don't necessarily want busyness through the whole frame, but you need to when you're composing the shot, think about okay, I'm going to have motion over here and maybe something normal and still over here and try to visualize that when you're working through your compositions or when you're trying to frame your shot.

So, a fun technique, something to do, especially if you're just feeling stuck and feeling like I've been shooting the same thing all the time. This is a way to get a radically different view of the world even if you're not interested in this as a final technique. Engaging in exercises like this can kick start your visual sense and get you out of a rut when you're feeling stuck.