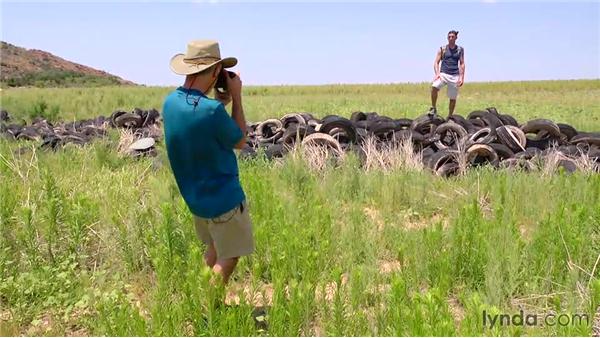 The spot I'm standing right now was, just a couple of years ago, deep underwater. I am standing in what was formerly Lake Altus Lugert. There was a shot I wanted here, so the lynda.com corps of engineers drained the lake for me. And when they did that, they revealed this weird reef of tires. These tires were put here on purpose to create fish habitat. And as the water receded, these tires were revealed as was Greg, who's been standing on the tires the whole time, actually that part's a lie. we put Greg there to create this shot. Now, there are a lot of different ways that I could shoot this image.

But I want to show you a particularly weird one, a kind of fun effect that you can use anytime you've got a broad vista that you want to shoot. Take a look at this. I have warped this image in a particular way to create this tiny little planet with Greg poking up off the top of it. This is a, a fun thing to do any time you've got flat terrain with some tall objects on it. So I'm going to show you how I shot this. And then in the next Practicing Photographer, you're going to see how the post-production works to create this effect. So, I I have somewhat limited movement here, just because of the vegetation that's around.

So I need to try to think about what I need in my final framing. The shot that I need to shoot, needs to be twice as wide as it is tall. I need a two to one ratio. So that's going to determine, that's going to go into my focal length choice. that consideration. The other thing is, I need the upper 25% of the frame to be pretty uniform. Which is great, I've got an empty sky. I also need the lower 25% of the frame to be pretty uniform. I think that's going to end up just being this grassy mess here. It's not perfectly uniform, but I'm hoping when that the warp happens, it just turns into this kind of solid green texture.

The other thing I need is, the ends of my frame need to be able to butt up against each other. Because I'm going to take this rectangular frame and warp it into a circle, and so the two ends of the rectangle need to go together. So that's going to limit where I frame my shot. So with those things in mind, I'm going to stand here. Again I said my mobility is limited because there's all these bug filled plants around that I don't really want to be standing in and I found a clean spot here. So I'm not going to, I'm not going to choose my framing by camera position, I'm going to choose it by focal length. Again with those ideas in mind try to get that 25% at the top and bottom.

And now, I simply shoot a panorama, just as I always would. I've got the left end of the frame set so that I'm not picking up any of this mountain. Because that would create a nonuniform edge when it's butted up against the other side. So that's going to be the left side of my frame I'm focusing and my exposure is coming in at ISO 200 at a two hundredth of a second at F11. So, that's going to give me good depth of field and a good steady shot. With that in mind, I'm now going to lock my exposure using the exposure lock button on my camera.

And I'm just going to shoot my panorama here. I'm doing two or three frames here. And I'm only going as far as the vegetation over there. I don't want to pick up any of the lake. I'm trying very hard to keep the horizon perfectly flat. Now those three frames may not add up to an image that is perfectly two to one. I can always crop it later and do some filling if I need to fill in some of the sky. In a technique like this, unless you're very practiced with it, you don't know for sure if what you got is going to work. So it's worth it to get some extra coverage, shoot it at a few different focal lengths.

Try zooming in some more if you can keep that the, the top and bottom of the frame is still filled with uniform texture. Panoramas are always a difficult proposition when you're shooting handheld as far as getting the horizon straight. So try a few different things. I'm also going to try including some mountains and including some lake so that you can see why it doesn't work when you do that. And so that we can explore some ways of fixing that if you accidentally do it. So again I'm just panning my camera. Just as I would for any panorama. Notice that I'm not turning my body. I am not going like this.

Because when I do that, I'm rotating around a point right here. I'm holding the camera. Taking a shot, and then rotating the camera. That means that as I rotate, I'm having to pull my body around to the back of the camera. So those are my shots. I'm hoping it's going to work. Now I need to get to a computer and do some warping to turn Greg and these tires into a tiny little planet.