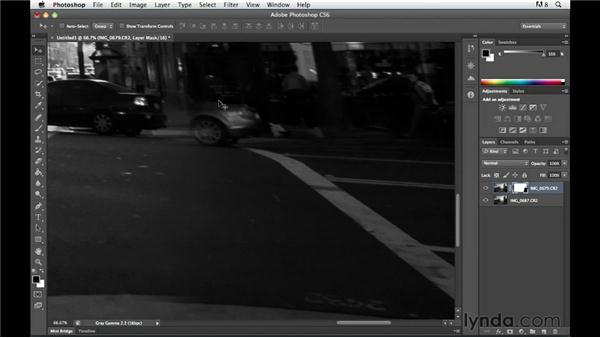 Join Ben Long for an in-depth discussion in this video Compositing street photography images with Photoshop, part of The Practicing Photographer.

Going out and nailing that one shot that just captrues a particular moment in time. It takes a lot of practice. However, no matter how good you are at recognizing and capturing that moment, there are times when the world doesn't conspire to help you get the shot that you want. For example, I was here at this intersection, and I saw this bicyclist coming along. I could see that he was going to make a right turn. So I thought, oh, this is really cool. I'm going to get this bicyclist right in the middle of this nice vista. There was a problem though, which was that right before the, I was ready to take the shot, a guy stepped into frame.

So, I ended up with this. Now, obviously, this image has not been edited yet, so the tone is off. But you can see there's this guy standing here. I decided not to worry about it. I decided I can take the guy out, and to facilitate removing the guy, I took another shot a few moments later. So I actually had these two shots. That I was able to composite into this finished shot. Now, before we get into how I do this. I will say that I am not a photojournalist. So I am not actually concerned about any kind of journalistic integrity or authenticity.

What I have just shown you is that this shot that we're looking at now is not actual literal truth. When I took this image, there was a guy standing there. If you are a photojournalist, you have a different set of parameters. I'm just looking to make a nice picture. And in my mind, this picture is not as nice when this guy is standing here. So fortunately there is a very, very easy way to do this in Photoshop. I'm going to take both these images. I'm in Bridge right now. And I'm going to go to Tools > Photoshop > Load Files into Photoshop Layers.

That's going to create a single document with each one of these images in a separate layer. Now, I don't have to use Bridge to do this. I could also do it manually. I could create a new document, open my other documents, and copy and paste their contents into separate layers. But this is a really nice way of having a one shot, single click, solution to this. So, now you see I've got this document here, and I have two layers. Photoshop's still thinking a little bit. It has put the guy on the top layer, if I hide this layer, you can see what's underneath.

And, this is actually great. This is the orientation that I want. What I would like to do is, take this guy out to reveal what's underneath. I could just grab the eraser and start erasing him to reveal what's underneath. But if I do that, I don't have a way of backing out of it later if I make a mistake. So I'm going to undo that. And offer up a different suggestion which is to add a layer mask to this image. So here on the layers palette with this layer selected I'm going to click down here on the add layer mask button.

And now I have a layer mask. The layer mask is completely white indicating that all of this layer is currently visible. I'm just going to switch over to some black paint and grab a paint brush and now when I paint into this mask, I'm taking the guy out to reveal what's underneath, so it looks like he's gone. If I go in here real close though, well, actually that was pretty clean. I can see there are some problems with, with what I've done. I've not got a partly visible car here, so I need to refine my mask.

I'm going to go in here with a smaller brush and some white again, and this is why I recommend using this approach rather than the paintbrush, because it means that I can go in and retouch my mask, but now I'm seeing that I, I have a problem in that my lines aren't lining up here. Well, that's because I had jostled the camera a little bit between shots, and you might have noticed this already. As I hide this upper layer, we see that the, the lower image is rotated a little bit. Fortunately, Photoshop can take care of that for me very easily, as well. I'm going to start by deleting this layer mask.

I just right click on it, and hit Delete Layer Mask. Now I'm going to select both layers by holding down the Shift key, and clicking on the lower layer, they're both selected. Now if I go up to Edit > Auto align layers, and just take the default auto projection. Photoshop is going to figure out how to get these layers perfectly aligned. So you can see it's done a little rotation here. And now when I click to hide this upper layer, I don't see that big shift in geometry. I see that the clouds have moved, and I see that the tree is blowing, but that's okay because I'm only going to be masking this little part down here.

So now, let's create another layer mask here, get some black paint, and now when I paint in here, to take the guy out, zoom in here. We can see that that crosswalk line is actually matching up just fine as is this line right here. There won't be any seams in this composite, because my layers are properly aligned. So, this is a very easy way to do this type of compositing. If you have multiple shots, you can very easily paint data in and out of one or the other using layer masks and aligned layers to come up with a final result like we saw earlier, which is this.

I think the bigger lesson here is not so much the compositing which is very simple, but a different approach to street shooting. The way that I work when the light turns really nice like this is I walk around looking for nice lighting. Here's another example of a final shot. I really liked the shadow that this building was casting and this black turn signal or, or stoplight. Anyway, I like the way this creates a frame. So I framed up a shot like that and then waited for some things to come it that were interesting. So I'm really playing with the light here.

And waiting for subject matter to come along within it. But let me show you what I started with. I knew that I was going to be masking this stuff so I went ahead and shot a few different things. I just took a shot that was as empty as possible. One reason it's difficult to nail that decisive moment in a good composition at a busy intersection like this is at one time or another there are always cars either going this way or this way at the light's change. Same thing with pedestrians. So then I shot this. So that was a nice bicyclist, I liked him. But I liked this one better. And then my final image, you can see I removed this car, I removed this car.

And I was able to do that because I had this image here that didn't have any cars in it. So I stood there for awhile shooting several frames until I was confident that I had a clean spot on every part of the street. And again what originally attracted me to the shot was not the unfolding of a particular event but compositional elements that I liked. I framed those up and then waited for events to unfold. Shot a bunch of them. With the idea that I would be able to composite it how I want. This is a different approach to street shooting than the decisive moment approach, but in a really busy chaotic environment, this is a way to get some compositions that would otherwise not be possible.

So, my call to action for you is to get your camera, go outside, find some cool lighting. Shoot multiple shots with subjects in different places in the frame, and then by auto-aligning and using layer masks, see how you can composite them together to get a final image.