Combining stills with video or a time lapse 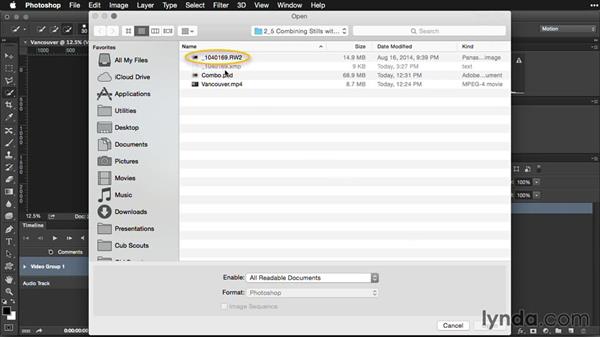 - We've talked about video. We've talked about shooting stills for timelapse. But nobody said that you can't take a still and a video file and combine them. Oftentimes it's subtle motion. Maybe it's a lock-down shot of a scene and then you put back video into the window so that the photo is there but there's slight movement outside. Or perhaps it's our example with the totem poles where I wanna take a technical approach here. For example, if we open up this RAW file I want you to see the before and after.

Here's the original photo as seen by the camera. Well, that's extremely dark and it lacks a lot of detail within the image itself. By developing that image, it's much easier to bring those details out using Adobe Camera RAW. And you can see that quite a bit has come through. Now, once that image is done and open I can bring them both into an application like Photoshop. For example, let's just open up the video clip.

And I'll bring that in as a background. Now, as I drag through here there's a little bobble early in the timelapse so I'm just gonna shorten this a bit. And don't worry, we're gonna explore all of these techniques a little bit more later. And one of the other things we'll tend to do to make something appear to be a seamless loop is split it so that we have a clean point. Now, it's pretty simple. I'll just put the one video clip in front of the other and then create a dissolve in between.

Again, all of these techniques are gonna be explored later but here it is in a subtle way. I've got a video file now of the clouds moving through with a little dissolve on the clouds so it makes a seamless loop. However, if you look at that playback you're gonna notice that there's extra extraneous movement here in the trees. Stuff we don't need that's gonna bloat the file size.

There it is. Now, what we'll do is mix these two together. I'll make a quick selection and grab the sky. I could then inverse that by choosing Select Inverse and now, thanks to the refined edge tool, it's very simple to feather that out for a gradual transition and even shift it or expand it in or out a bit. When we're ready, I'll add a layer mask and click OK.

And what you can see now is that the photo is being composited over the moving video. So, we get the benefit of the dramatic timelapse skies with a rock solid image with no noise or any problems going on on the other areas. This'll help us get the file size down while making a seamless loop that's well suited as both a GIF or a traditional video-based cinemagraph. Now, at a high level there we went through a lot of technology in Photoshop.

Don't worry. I just wanted to lay the groundwork so you saw the logic. What happened there was pretty simple. We took a video file and we found a loop point. We'll talk about that more later but there's lots of strategies for creating loops. Essentially, though, you want to get a seamless point in the video so it's not jarring to the viewer. Then in this case we combined a still image with the video file. We took a frozen area that was developed, a nice RAW file with great detail, and layered it on top.

Now, there are several more steps and techniques including resizing, compression, export options, and all sorts of other things that we'll explore a little bit later. But let's finish out some advice on shooting and how to visualize the technical approach. We've just talked about using video, timelapse, or a combination of techniques. Hopefully now you're getting some ideas on the acquisition process.

2/24/2015
Learn how to use Photoshop, After Effects, and two dedicated tools—Flixel and Cliplets—to explore the creative possibilities of cinemagraphs: static photos that contain areas of motion. Rich Harrington explores assembly techniques in each program and illustrates effective shooting and post-production techniques to improve the end results. The final cinemagraphs can be used in websites, banner ads, emails, presentations, or even digital signage.
Topics include:

Video: Combining stills with video or a time lapse