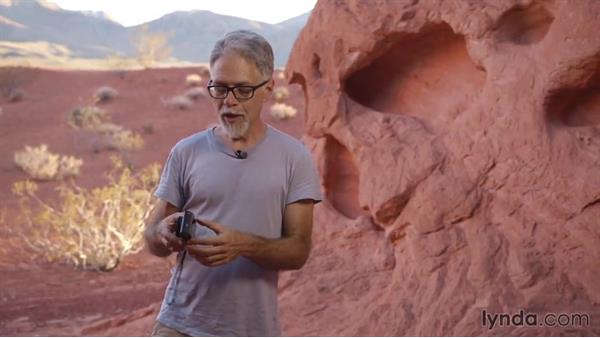 - Hi, I'm Ben Long and if you've watched my iPhone 5S photography course, you know that I take the camera in this phone pretty seriously. It is a great photographic tool. This week on the Practicing Photographer though, we're going to look at the point and shoot camera. If this is such a great camera and I've always got it with me, why are point and shoots still relevant at all? Well, depending on your photographic needs they may not be. Now, I have I don't know how many SLR's and mirror-less cameras and what not. I have a lot of nice, big high end cameras that I really enjoy and that are also excellent photographic tools but there are times when they are just too big and the smaller size of a point and shoot is really valuable, but then there is my phone.

It's not quite APS size but it's still much bigger than the usual third of a centimeter sensors that a point and shoot camera has. I have an option for shallow depth of field. I have very great low light capability but with Mark III Sony has added a couple of really killer features. First of all it's a very compact camera but with a Mark III I now have an articulated screen. This gives me flexibility for shooting down low. I can flip the screen all the way up. The image will automatically flip and now I can do the obligatory selfies with this camera. But the thing that really sold if for me is not this screen but this one.

It's got a couple of other cool features, built in WiFi. So if you think, well but what I like about my cell phone camera is I can immediately get images out and into email and that kind of thing. I can put an application on my iPhone and transmit from here directly to the phone, move my images real quickly, process them there and then upload them so I still have that wireless link to the outside world that I want via my cell phone. Finally and this is the case in a number of these high end point and shoots, I have a programmable ring here at the front of the camera. This ring right here can be configured to be anyone of a number of different features.

I have it set to the ISO. This ring on the back gives me aperture control. If you look at my mode dial you will see I have all of the normal SLR modes that I would expect on a full size camera here on this point and shoot program mode. Aperture priority, shutter priority, full manual mode and a selection of scene modes. So again, I pop up my eye level view finder I've got in aperture priority mode say, aperture control back here, ISO here. Very, very speedy auto focus, much faster than what I can get on an iPhone. This is a very full featured camera in a tiny little package.

So point and shoot cameras are still relevant. There are a lot of times when I will take this out rather than one of my larger cameras simply because I need the ease of carrying it. There are other times like right now where I'm wandering through this fantastic space, I have my SLR with me but it's hot and I'm tired and for right now I'm going to leave it in the car and take this thing. So don't write off point and shoots because of your cell phone. Even as good as cell phone cameras are now, there is still a place in your photographic toolkit for one of these.