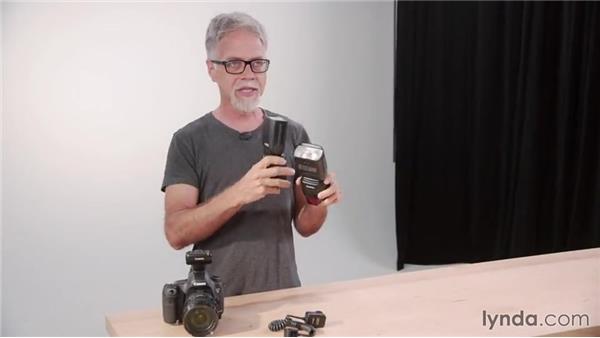 Join Ben Long for an in-depth discussion in this video Canon wireless flash with built in radio control, part of The Practicing Photographer.

Hi, I'm Ben Long. And this week on the Practicing Photographer, we're going to talk about a very specific Canon flash model, the Speedlite 600EX-RT. If you've seen my Foundations of photography, Flash course, you have seen examples of the importance of getting your flash off your camera. Once your flash is out here floating around the world, you can do cooler lighting effects, you can eliminate a lot of the problems that flash photography often creates like red eye and harsh front lighting. The problem is to get you flash off camera, you've got to have a way of connecting it to the camera.

There are very inexpensive alternatives for that, such as off-camera sync cords. There are also, radio options. In the Foundations of Photography flash course, I look at some Cowboy Studios little radio transmitters. I like those a lot. But, they're not always completely reliable. Sometimes, I have find that I turn them on and they're not finding each other, and they're not syncing properly. More importantly, the transmitters that I had while, though inexpensive. Did not transmit TTL information from the camera to the flash.

So I had to work with the flashes in a full manual mode. These Canon 600EX-RT's have built-in radio transmitters, that's the RT part. And I'm loving this. It's making a lot of things possible that I couldn't do before. And giving me a huge range of flash flexibility. So I just wanted to show you this system because if you do a lot of flash work, a lot of off camera flash work, and a lot of off camera flash work with multiple flashes, this is a great solution. Now, Canon flashes for years have had built-in infrared communicators in them.

This means, that when the flash on my camera or special infrared transmitter on my camera, I could have wireless flash capability because information could be transmitted through infrared pulses. The problem is in broad daylight, those infrared pulses often didn't work. They got drowned out by sunlight. They don't have great range, and they don't work through walls. With radio, I get 360 degree transmission for tremendous distance, through walls. It's just a much more reliable way to go when it works. And what I'm finding with the 600 RTs is that it works more often than the third-party transmitters I've had work.

There's another part of that sentence in there that I just couldn't find, but I think that's what I was trying to say. So, for all of this to work, I've got a few options. I can put one of these flashes on my camera, and use it as a transmitter. To control another one of these flashes. So, I've got two here. So, this can become a master, this can become a slave. But now, I've got my flash back on my camera. What I usually want to do, is put these on stands off of my camera. For that, I want to go to a dedicated radio transmitter. This is the Canon Speedlite ST-E3-RT.

So this goes on here and becomes just a Master. It's basically a Master Flash without the Flash. I can easily put these in Slave Mode, and now I've got full wireless ETTL2 compatible flashes. These are big beefy powerful flashes. They've got a guide number of 60. That means, they've got a range of 60 meters, it works out to be somewhere between 85 feet and 196 feet. Depending on the zoom setting that I have on the flash. My radio range from here is huge. I've got like a 100 foot range.

Normally, the only way to get that would be with a, with a PC cord sync cable that would be very long and a hassle to carry. And so, this is great. I have got 100 feet, some of that through obstacles and that kind of thing, so I am really liking the radio range on it. With this controller, I can control up to five groups of flashes or 15 individual flashes. Now, a group of flashes means, I can have three flashes over here as one group. Three or four flashes over here, as another group. And I can control all of that ratioing from right here, so I can say I want this group to be a third again, as strong as that group.

Or I can do all of that by controlling individual flashes, again up to 15 of them. I, as I said I get full ETTL2 compatibility. What's great about that, is that I can set flash exposure compensation on the camera, and it gets transmitted to the flashers. Or I can set it up here, or I can define groups and ratioing on here. All of that gets transmitted. In my Flash Course, you saw me constantly having to run over to flashes to dial in power adjustments. I don't have to do that anymore. I get all of that transmitted from my wireless controller here. And by the way, I get full manual control if I want it.

I can still work that way. Another thing that I really like about this system, is I also get high speed sync. So, I can shoot with shutter speeds beyond 1, 200th of a second. That gives me the ability to turn down the sun basically when I'm outside, and have the flash overpower it. So, if you are looking to upgrade your flash system, if you're looking into buying a flash system from scratch and you're a Canon shooter, I really recommend this. It is expensive. These are more expensive than buying older non-radio capable flashes and adding on third party transmitters, but I get this ETTL compatibility and I get reliability.

My only complaints about them are, they lack a PC cord socket. So if I did have that 100 foot cable and wanted to use it, I couldn't. I expect Canon left that off because they figure, well, we're giving you a 100 feet of radio transmission. How much do you really need? So I haven't actually missed that. That's, that may not ever turn out to be a problem. It's just my flashes have always had those, so I feel picky about it. Also, the foot on this flash has this rubber seal around it. Which is great for inclement weather. It, it feels like it really goes in there and is sturdy.

The problem is attaching it to third party shoes, can be difficult. I'm having trouble wedging sometimes the shoes on other flash mounts. And flash down adapters and things on to here. I've been finding that if the rubbers soft enough, I can just squish down and mash it in there. If you're a really dependent on a lot of different kinds of mounts, this maybe an issue that you want to look into. Check some forms, see if other people are using the same type of gear with these flashes. So again, that's the Canon Speedlite 600EX-RT, a really great wireless flash solution.