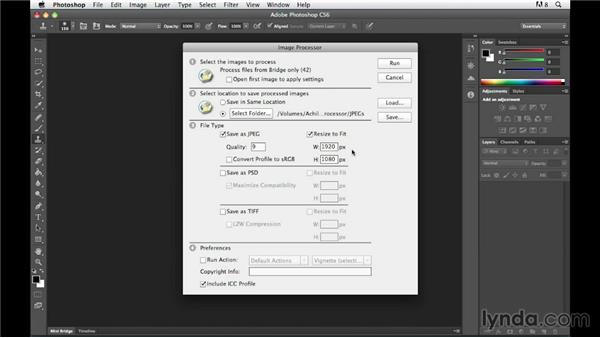 These days people often use the word Photoshop as a verb. To Photoshop an image means to radically distort it or correct it or alter it or whatever. And of course Photoshop is great at all of that stuff. But Photoshop also has some handy image management utility features. That if you don't know about you really should be using. We're going to look at Image Processor. If you sometimes find yourself in a situation where you're repetitively opening images and saving them to change them to a different file format then I hate to say it but you've been wasting your time.

Because Image Processor can do it much more quickly. Let me give you an example. We recently went to Death Valley to shoot a landscape shooting course. And I came back with a whole bunch of images. I've got folders full of images from different locations. I now need to get these images to the Lynda editing team. I was shooting raw, and they don't need the raw files. The raw files are bigger than they need. But more importantly, I'm going to be submitting these files electronically, via Dropbox. So to have to send raw files, I think I've got like 80 gigabytes of data. I don't have that much Dropbox storage, and it would take a long time to send.

So it would be great if I could send these as JPEGs. Now, there are a few different ways I could generate JPEGs from these files. I could go through and open each image individually, in Photoshop, and save it out. That would take a long time. Another option is, I could open batches of images In Camera Raw, and I'm just doing a small batch here for the sake of expediency. You can open them in Camera Raw, hit Select All, and then hit the Save Images button. Here I could select a location, maybe come up with a naming convention that I like.

And then change the format to JPEG. I could then hit the Save button, and go to lunch. Okay, you don't actually have to go to lunch. But you could, the point being, you could do something else. Because what's going to happen is Camera Raw's going to sit there, and chug through all of your images, and save out JPEGs. Which is great, very easy, but it's got some limitations. First of all, I don't have great sizing options. They really don't need images that are bigger than 1920 by 1080 HD resolution. But if I come down here to the workflow options link, I see that my sizing options are limited to these kind of regular multiples of my original size, so that's not a great option.

The other problem is, I actually have more than just raw files, because I've done some editing in Photoshop on some of these images. We come down here, here's a raw file. That also has a Photoshop version sitting right next to it. I would like to produce a JPEG from the Photoshop version. This will give them a before and after of my editing process. I can't open Photoshop documents in Camera Raw, so it would be nice if I had a single batch processing operation that can handle every image or file format that's in this folder. And I have that in image processor.

I could save it back into the original location and in this case I'm going to select a folder and I'm going to create a new folder here called jpegs. Then select that. Now I need to tell it what format I want to save into. And what's cool is I can actually save out in multiple formats at the same time. I can save out a JPEG, a Photoshop Document, and a TIF if I wanted to. I only need JPEGs. Set my quality level. I have also set Resize to Fit and put in 1920 by 1080. What that means is the document will automatically be resized to fit within a box of this size.

So whether I've got a portrait oriented that is a vertical oriented image or a landscape image, a horizontally oriented image. They're all going to be resized to fit here, so this saves me from having to go in and individually resize images in different ways depending on their orientation. If I wanted, I could run a standard PhotoShop action. Here are the normal menus that appear in Photoshop's action palette. So, what I might want to do is come up, say, with some sharpening settings that work well for an image that's 1920 by 1080. I would then be able to just pick that sharpen action here and have it apply to all my images.

I'm not going to do that. I could put in my copyright info. This would just be stuck in the copyright field of the image's metadata. If ultimately these images were part of a print workflow, an I had a special ICC profile that I wanted embedded in the image, I could have that stuck there. Once I get this configured the way that I want, I just hit the Run button. And each image is opened in Photoshop, it's resized, and then it's saved into my folder as a JPEG. So as you can see, it's, the actual processing is not any faster than it would be if I was opening images manually in Photoshop.

There's no, like, back-end speedier thing that it's doing. It's pretty brute force. Opening in Photoshop, sizing, and then saving. The thing is, I don't have to do it. So now I can go to lunch again. As you might be surmising, this whole batch processing thing is going to make you fat. Actually, that's not true. You don't have to go to lunch, you can do something else. I'll go to the gym instead, to offset the lunch that I ate from my last batch processing operation. So this is just going to chug away. Now, it's got 40 images to go through. We don't really need to sit here and watch all of those. There is no cancel button available. If you accidentally start image processor and decide that you want to stop it, the only way to do that is going to be to force quit.

On the Macintosh, you can force quit by choosing, Cmd+Option+Escape, which brings up the force quit dialogue box. I'm just going to tell it to force quit Photoshop. And we can go look at what it's done so far. So again, that's the only way out of a batch process started with Image Processor. I'm back here in Bridge. I'm going to go back to my image processor folder. And you can see that there is a JPEGs folder here. Inside it is another jpeg folder because it creates a separate folder for each file type that it is outputting, so I could always move these later. And here I got a bunch of JPEGs including JPEGs created from any Photoshop documents that I had created.

What's cool is, it keeps any ratings that you have assigned to the image. And I can see that they have, in fact, been resized, which is very nice. So, really speedy way of getting through that batch process. Let's look at how I might do his from within Photoshop itself. If you're not a Bridge user, then maybe this is something you want to trigger right from within Photoshop. And you can do that by going to File>Scripts>Image Processor, and you'll get to the same dialog box. However, you have a couple of different options now. Use open images. If I had a whole bunch of images that I'd been working on and I just wanted to quickly spit out JPEGs, I could check that.

Or, I can select a folder. So now I can go in here and choose the folder that I want to work on, and I can also ask it to include all sub-folders. Then I configure this the rest of the, just like I did before, hit Run, it'll do the same thing that it did when I launched from Bridge. So if you regularly find yourself needing to save images into different formats, don't forget about the Image Processor. Surprisingly, it's an easy facility to just kind of slip out of your mind. So let me give you this call to action here to go right now and open up Image Processor and give it a try.

Get it into your hands. So you've gotta use it a couple of times before you really realize, wow, this is a great tool that I need to, to remember. I shouldn't be tediously doing this stuff on my own anymore. Image Processor is a great way to save a lot of time.