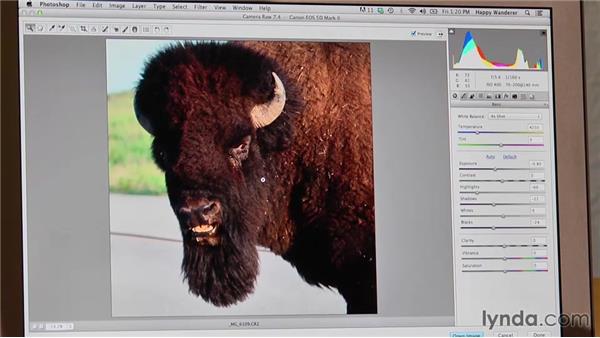 Join Ben Long for an in-depth discussion in this video Batch exposure adjustments on raw files, part of The Practicing Photographer.

Hi, and welcome to this week's, The Practicing Photographer. You know, it's called The Practicing Photographer, for a reason. You need to practice. Because, if you don't practice, you might make boneheaded mistakes. Let me show you one. So I'm shootin' these buffalo. I'm in this wildlife preserve. There's nothing but buffalo around. And I take all these pictures of increasingly angry Buffalo. And it's possible that they're angry because they're going this idiot, he's overexposing everything. Because look, all of my shots here are, are overexposed. They're, they're not outrageously over exposed but this background is way too white.

These blacks aren't black. Everything is overexposed. Here's the weird thing. I can't figure out why. I actually recognized it in the field and looked at my camera and all of my settings were okay. you can see here in my exit display. And, and this is a great thing about having an exit readout in your browser like I've got here in Adobe Bridge. You would have the same thing in LightRoom or Apple's Aperture, or iPhoto. I can try to do some forensics on, on my image here. I have no exposure compensation dialed in. I was if I come down here to camera data xif, I find out that I'm in auto mode.

I can see my aperture. I can see that I'm in evaluating metering, which is a matrix metering on a Canon camera so I didn't have a spot metering problem. honestly I don't know why this happened. I don't know if maybe the camera isn't messed up or something about this particular camera and lens combination. I want to go look into that and see if I can get the problem to come back. If so, I may need to send the camera into the shop. In the meantime, I've got a bunch of washed out buffalo here. Not washed up buffalo, that's a different thing. I've got bunch of washed out buffalo here. What can I do about it? I would like to save some of these shots. Now, I will say, a lot of these shots are just kind of boring.

this was a, a very noisy buffalo. So I like that. I like him looking at me. And I like him much better looking at me with his mouth open. I got a couple of different framings there. I think I'm going to go with one of these. So these are raw files which is going to help me a lot for recovering any overblown highlights. But I don't think I have anything completely blown out. I'm going to open this in Camera Raw. And sure enough my histogram shows me exactly what I was saying I don't have any real blacks. I don't have any real whites. So these are just basic tonal adjustments here.

I'm using the shadows and blacks sliders to drop my blacks back to where they're suppose to be. I'm using my exposure and highlights sliders To try to get those very bright parts under control. And I think that's better. Let me show you, that's before, that's after. So I've just put black and white back to where they're supposed to be. You can see there's no highlight clipping here. I do have some shadow clipping, which means these very darkest tones are probably going to complete black. I don't care about that, they look fine. That should be a dark shadow. So that looks pretty good.

That said, this image still has some possible tonality problems. I think I'm going to start though by, by cropping the image, now that I can see that my tones are going to work. You may think, well why didn't you crop first? honestly an image that that's washed out, that's that washed out, I just want to see if I can get it back to normal before I do anything else with the image. I'm going to take this down to a square, I think. And just crop in on his head, maybe something more like that. I, I kind of, he's wearing little pantaloons which is kind of funny but you can't really seem them in that image, so I don't really mind getting rid of them altogether.

And, I don't want some angry buffalo coming at me for making fun of his pantaloons. Now I've got all of this bright stuff behind and that's not actually an exposure problem. That is just, that's how the image was. It was a bright day out and I got this dark buffalo. I don't like that bright stuff so much back there. I can try and selectively darken it. In this case, I can cheat it pretty easily by going over here to the Effects Tab. Going down to the post crop vignetting section and just throwing some vignetting into, into the edges and the corners. Because my bright spots are in the edges and the corners that's a really easy way to darken it.

So that's looking pretty good. now I'm going to do something a little bit strange here. I'm going to stop my editing on this image before it's done. I'm going to hit the done button. And go back to bridge and when I do that I see my adjusted image here. Those edits that I made to adjust tonality are probably correct for all of these other images. So I'm going to select all of them, I'm holding down the shift key to do a contiguous selection. And then oh no I just opened everything, come back to bridge, start over here, select all of these. And now if I right-click or on the Macintosh I'm using Ctrl + Click, and come down here to where it says Develop Settings, I can say Previous Conversion.

And there we go. That's throwing in my tonal adjustments on all of my images. Notice it skips the crop, which is good. And it skips any. localized adjustments which I hadn't done yet. So, now at least I don't have to do all of that stuff. It did throw my vignette in, so I may want to take that off. I don't know if I'm going to use any of those other edits but that's a really quick way of getting all of those edits back into the, into my other images. The only last thing I would say here is oh, I need to recheck my white point here because my crop Has now changed my histogram some, so I want to put this up here.

Dial in some more contrast. That's looking pretty good. I don't like that eye being in shadow. So I just want to paint a little bit of light into there with my selective adjustment tool. It's currently set at exposure adjustment of half a stop so I can brighten some of that up and make it look a little more natural by extending it down to there. Might be a little too bright. If I want it to be a conspicuous edit there's before there's after. I like that better. Because it's his eye it needs to be visible. So I think that makes a difference.

Now I would take this into Photoshop, sharpen it, resize it. The good news is though, my camera messed up using basic normal tonal controls. I can still get my images back to normal. The bad news is Any image has only a certain amount of editing latitude that you can do before you start seeing tone breaks and posterization, banding in your image. I've used up a bunch of my editability just to get the tones back to where they should have been in camera. If I was going to do a lot more wild editing now, I might find that the image wasn't holding up so well. This is as far as I'm going to need to push it.