Adjusting the color of shadows in an image 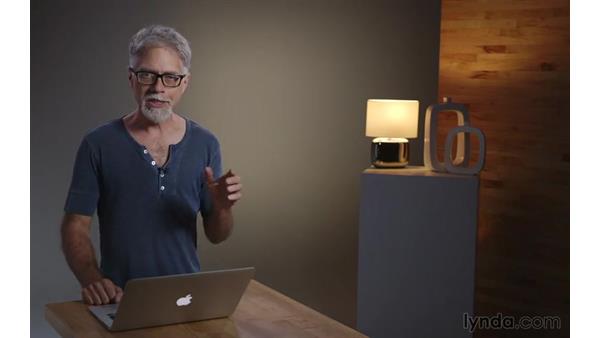 - If you've watched my Exposure course, then you've already been introduced to the idea that a lot of your visual process is actually neurological, it's not optical. Your brain does a lot of calculations that really change the way you see things. And one of the things it does constantly, all the time, is correct color for you. This week on The Practicing Photographer, we're gonna look at a specific way that your brain might be correcting color, in a way that doesn't necessarily work to your photo's best advantage. Take a look at this image, here. This was just a-- I was walking down the street and I saw this nice backlight behind this tree.

I don't really know if this image works, or not, I need to correct it. But in the process of correcting it, we're gonna see a problem, here. So I've got this gray cement on the ground; I'm kinda standing in the gutter, here. But is it actually gray? Take a look at it. That's not gray, that's blue cement. And if you don't see that right away, it's because your brain is really correcting it, for you. You know that the concrete is supposed to be gray, so you're seeing it as gray. But there is definitely a blue color cast, in here. And once you see it, you may go, "Well yeah, of course, it's obvious.

"I knew that was there." But we filter it out, somehow. And in an image like this, that blue is gonna become a problem. I think it's a problem already; it's gonna become worse once I start editing. I'm here in Lightroom, I'm gonna just do some quick things to punch up the image a little better. It needs more Contrast, so I'm dropping the Black Point. I'm increasing the Contrast, and as soon as I do that... Okay, come on, that's blue. You can't deny it at this point. The increase in Contrast-- Actually it's the increase of the Black Point, has really brought up the blue in the image. Let me finish with some edits, here.

I've got a bunch of tones gathered up in here, that's all of the highlight stuff, I would like, still, some more Contrast in the image, but a lot of this stuff is blown out into pure white. By dragging the Highlights slider to the left, watch what happens to these tones up here. I can really stretch them out. And though I've darkened the brightest tones a little bit, I can put that back with the White slider. I love these controls in Lightroom and CameraW. The ability to expand dynamic range at the top and bottom of the tonal range in this software is just fantastic.

And that's given me a lot more Contrast in here. This was a raw image, so it's always gonna need a little bit of a clarity adjustment. And I like what's happening in here, but I'm a little distracted by the outside. I'm gonna just drop a little bit of Vignetting on to see if that doesn't constrain my eye more towards the middle of the image. There we go, that gives us a little more mystery around the edges. But still, that street is blue. So I'm gonna just slurp a little blue out of the image, which I can do very easily here in the HSL / Color / Black and White slider. If you're working in CameraW, you have the exact same controls.

If you are not in Raw, or not in Lightroom, but are just in Photoshop or another image editor, any application that has an HSL editor is going to allow you to reduce saturation in an image. But I want to do it selectively. And these days most applications allow you to reduce the saturation of a particular color range. I'm gonna click on this thing, here, and just come over to this blue shadow and click and drag down. Aha! You can see, over here on the right-hand side, it has identified blue as the target color and automatically desaturated that.

So look at the difference, here, as I do a before and after. That's before, that's after. This looks a lot more like pavement, now. Let's back off a little bit even from some of those basic edits. Whoops, that's the wrong one. Ah, this is getting out of hand, here. Let me turn my Black Point back up. I'm gonna take some of that Contrast back off, just so you can see that even when it's not punched up, the difference between here and here is still very dramatic. This just looks better.

It looks more like what we're expecting to see, and it... (sighs) I'm not even sure all of the reasons that I think it looks better. It looks like an image editor who knows what they're doing, for one thing. I don't need blue in there, it's not a place where I need color information. What that area of the image is about is about Contrast. And so, by reducing it to a more monochromatic color palette, or lack of color palette, I get more of a sense of Contrast. It's not distracting me from the beautiful greens, up here. I've got this wonderful bit of gray, with a little red highlighting in there coming up into this nice, backlit field of green.

The tricky thing is recognizing it. Learning to second-guess your eyes and go, "That's supposed to be gray, and I don't think it is." For a while, you may just need to practice. Any time you see some gray pavement, or gray anything in shadow, try pulling some saturation out of it and see what the difference is. As you do that, more, your eye will get trained to recognize when that extra color cast and tint is there. Obviously there are times when it's fine to leave it alone. It's just important to be able to recognize it, and know how to get rid of it. I'll give you one other quick example; I'm not gonna work through this, but just give you a before and after.

I was walking down the street and saw this, and you may go, "Oh, that's kinda blah." But I liked these repeating patterns of highlights, here. And so I just punched that up. Again, I obviously increased the Contrast on the ground, but one of the big changes is I took it out of that, that blue-ish, blah, shady White Balance, and into something with a lot more warmth. And it's just more inviting. And in the Contrast adjustment, I get to see this geometric pattern that had caught my eye in the first place.

Shadows are usually blue because the sky is blue, there's a lot of reflected light that comes down in shadows cast by the sun, so this is not an unusual problem to face. As you can see, it's really, really easy to fix. Once you learn to recognize it.

Video: Adjusting the color of shadows in an image